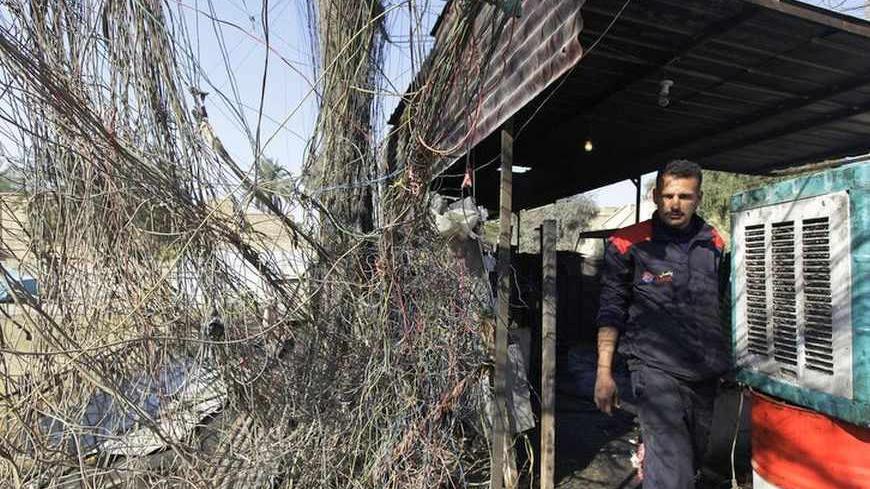 An electrician walks past wires connected to a local generator in Baghdad, Jan. 23, 2011. - REUTERS/Saad Shalash

Last month, demonstrators in the southern Iraqi cities of Nassiriya and Basra organized nightly rallies to protest the government’s failure to provide enough electricity for households during the notoriously hot summer. With temperatures exceeding 113 degrees Fahrenheit during July and August, most households get less than 12 hours a day of electric power. The Iraqi government spent $28 billion to reform electricity services, which became one of the most critical problems in the country since the second Gulf War in 1991.

The failure to handle this problem is another cause for the increasing disillusionment with the government. Responding to the popular rage, Prime Minister Nouri al-Maliki said in a TV interview that he was manipulated by the minister of electricity and his staff, who provided him with incorrect information about their system's capacity. Although the minister of electricity position has been rotated among five people since 2006, none of them managed to make tangible improvements. But this did not prevent political parties from competing to obtain this position, a contest driven less by a "commitment" to social welfare and more by the fact the ministry is contract-rich. During a TV interview, Khalaf al-Ileyan, whose party was "awarded" this ministry according to a 2006 power-sharing agreement, said that he was offered a $2 million "down payment" and a monthly $1 million if he accepted a nomination for this position.

This confession might be shocking, but in fact it reflects habitual relations within Iraqi elite. "Buying" a ministry is nothing new in Iraq. The ritual of power-sharing has become all about finding ways to distribute the growing oil revenues among political parties and transforming state institutions into fiefdoms of competing groups. Initially, the power-sharing formula was presented as a method to create an inclusive system of government that departs from the legacy of exclusionary politics. In practice, power-sharing has become a power apportionment, what Iraqis call "muhasesa." This is partly because it emphasized ethnic and sectarian categories in determining political weights, which turned institutions into instruments of political conflicts rather than being frameworks to solve them.

Maliki has exploited the failures and gaps of this system to create a shadow state that is loyal and responsive to him. He managed to maneuver this system and build strong personal influence within the security institutions, armed forces, independent institutions and Iraq’s judiciary. In an oil-dependent country like Iraq, the executive branch tends to become stronger than the legislative branch because it manages more resources and more complex networks of patronage. But these measures have only intensified political conflict while failing to make the state more efficient.

Divided between Maliki’s camp, whose authoritarian disposition is increasing, and his rivals’ camp, whose only alternative is more "apportionment" politics, the political elite is evidently out of touch with the demands of average citizens. Maliki accuses his rivals of doing everything to hinder his government; his rivals say that the failure is caused by his policies. Their contest is more about finding a scapegoat and less about identifying new ways to address the state’s failure.

The problem overrides this short-sighted dispute among opportunistic politicians. It is rather about the way Iraq’s economy is working and the way in which the lack of strong institutions affects a responsible and wise management of the wealth. The Iraqi constitution stipulates: “Oil and gas are the Iraqi people’s property,” but the true story is different. According to the UN Development Program, 75% of Iraqis identified poverty as the most pressing need, 79% of households rated electricity as "bad" or "very bad," and only 26% of the population is covered by the public sewage network. This, despite Iraq’s GDP growth from $20 billion in 2002 to $128 billion in 2012, thanks to growth in oil production, which accounts for 60% of GDP and 90% of government revenue.

For years, it has been repeated that Iraq is a rich state and a poor society. The path Iraq has taken has only confirmed this saying, despite the improvement in per capita income. Powerful political parties managed to extract their revenues through the networks of patronage they run within state bodies. One way to do so was by awarding governmental contracts to real or fake companies in exchange for bribes or commissions.

One example is the Ministry of Interior's $40 million contract with a British businessman, James McCormick, to import "bomb detectors" that turned out to be dressed-up divining rods. McCormick was convicted on four accounts of fraud in England, yet his devices were still used by Iraqi security. Some officials, including the prime minister himself, insist that not all these devices were fraudulent. After two years since Iraqi authorities arrested Maj. Gen. Jihad al-Jabiri, the army’s bomb squad commander, on corruption charges for taking bribes to purchase McCormick’s fake explosive detectors, he was recently released and the charges against him were dropped.

Security-related ministries have seen the worst examples of corruption because of their huge budget allocations, poorly monitored US financial support and the urgent need to build them from scratch. There are reports by the Integrity Committee, the US general inspector in Iraq and the Parliamentary Security and Defense Committee, on the hundreds of millions wasted because of corruption in these ministries. Yet, except for a few mid- or low-level officials who found no political sponsor, all partisan senior officials managed to escape punishment or accountability. As the highest constitutional body with a mandate to monitor executive officials, the parliament was supposed to play a crucial role in addressing this corruption. In reality, it did nothing but deepen it by relating accountability to sectarian targeting and behind-the-scenes compromises on the basis of "let my guy go, I let yours go." Among average Iraqis, the parliament itself is very notorious, especially for legislation it passed to provide its members with huge salaries and benefits.

The state in Iraq has always been the main shaper of social change and hierarchies. Post-Saddam Iraq is no exception. In the last few years, and as a result of the flourishing clientelism and political nepotism, new alliances have emerged between political groups and sectors of the business class in a sort of collaboration based on crony capitalism. Each major group has its own favorite entrepreneurs, who benefit from contracts awarded by the group’s representatives in the government and, in turn, they support the group financially.

Politics is mixed with business everywhere, but in Iraq this takes the form of direct looting of "national" wealth by a new oligarchy composed of conflicting political groups and their economic and bureaucratic clients. The political process which was initially intended to break with the authoritarian past is becoming more influenced by elite politics and interests than people’s needs. Politicians resort to identity politics and ethnic and sectarian incitement to overshadow their personal benefits generated by a process which, instead of solving ethno-sectarian tensions, reproduces them.