Islamic parties in the Kurdistan Region of Iraq represent the swing vote in the region’s stalemated political process. 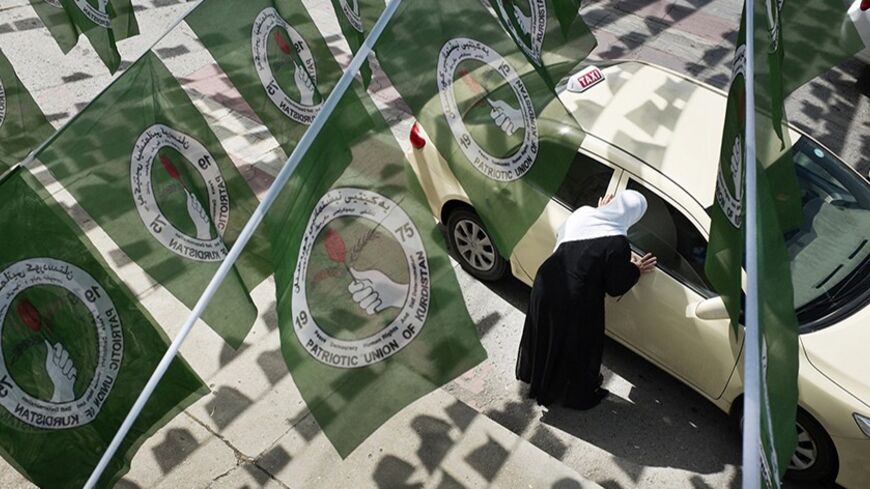 A woman hails a taxi while standing under Patriotic Union of Kurdistan (PUK) logos before Iraq's parliamentary elections in Sulaimaniyah, April 28, 2014. - REUTERS/Jacob Russell

While Iraqi Kurdistan’s fierce 2014 election competition has subsided, power struggles and deal-making between the major parties are likely to continue in the months ahead. Preliminary results for the provincial councils indicate that the secular nationalist parties — the Kurdistan Democratic Party (KDP), the Patriotic Union of Kurdistan (PUK) and the Gorran movement — have won the majority of seats. Still, Islamic groups have emerged as a swing vote, particularly in contested localities and where traditional party alliances are dissipating. Capturing the Islamic vote may help secular parties temporarily consolidate power, but it also underlines the deeper challenges of institutionalizing a new power-sharing arrangement and managing the Iraqi Kurdistan’s rapid economic development and social changes.

The Kurdish secular-Islamic nexus has become more complicated, however, since the rise of the Gorran movement in 2009 and weakening of the PUK. While remaining part of the Kurdistan Regional Government (KRG), the Islamic parties have joined the opposition to demand political reform and an end to corruption. They also have benefited from the power struggles between the secular parties and breakdown of the KDP-PUK Strategic Agreement. In the effort to reconfigure the balance of power and form a new government, secular parties are courting Islamic groups. Although the new Kurdish parliament has yet to be formed after seven months, the KDP offered the KIU the Ministries of Labor and Social Affairs, Electricity, Parliamentary Affairs, Disputed Areas and the Head of the Department for Nongovernmental Affairs. Similarly, the newly appointed speaker of the Iraqi Kurdistan parliament from the Gorran list is an Islamist.

Islamic parties also have become part of the competition for control of provincial councils, which have gained importance since they receive their own budgets from Baghdad and are responsible for economic development, service provision and appointing key posts, including the governor. Although the Islamic parties received about 15% of the overall vote in the 2014 provincial council elections and will likely secure no more than about eight seats in each of the three 30-to-32-member councils, they will play an important role in forming coalition administrations. Their swing vote will be necessary in Sulaimaniyah, where Gorran won 43% of the vote, and whose governorship remains contested by the PUK.

Although the secular-Islamist pact has been criticized by some within both parties, it is generally tolerated given the Iraqi Kurdistan’s current political climate. That is, it is considered less "blasphemous" for secular and Islamic parties to affiliate than it is for the KDP to join the PUK or Gorran, or for Gorran and the PUK to turn to the KDP. This tolerance also reflects the nature of Kurdish society — 95% of which is Sunni Muslim — and the general perception that the Islamic parties (KIU) are neither corrupt nor militarily threatening, particularly since they do not control oil revenues or have their own militias. Gorran also has rationalized this alliance as part of its effort to create a “Gorrani” identity whereby membership is not based on an individual’s political background but a shared philosophy based on anticorruption.

Islamic influences are penetrating Iraqi Kurdistan in another more subtle way. According to one Erbil resident, “The secular parties’ own second generation is becoming part of Islamic institutions from within.” Others have described a “whole new generation of Kurds following the Quran.” Some residents argue that this trend is a reaction to the rapid lifestyle changes linked to the Kurdistan Region of Iraq’s vast oil wealth; nightclubs, massage parlors, bars and immodest attire — even if they benefit materially from the oil wealth. Still others are convinced that their national wealth is being stolen. These sentiments also are shaped by regional influences, such as Turkey's ruling Justice and Development Party (AKP), which espouses pragmatic, economic development and conservative Islamic values.

Indeed, there has been a backlash against Islamic influences by secular nationalist groups and individuals. In the 2009 parliamentary elections, KIU offices were attacked and burned down. Clashes between secular groups and Islamists reoccurred in Dohuk province in 2011, which led to the burning down of Christian and Yezidi shops where alcohol was sold. During the 2014 election campaign in Erbil, unknown gunmen fired at the home of Ali Bapir, leader of the KIG and killed a KIG guard. Secularists also criticize Islamic influences as a “tumor growing within Kurdish society, alongside corruption.” Some worry that an increasingly Islamic political space and society, alongside unchecked corruption, will give rise to small Islamic parties that can mobilize the masses.

These trends have implications for governance and development in the Kurdistan Region of Iraq. Under the current circumstances, it is unlikely that a strong Islamic opposition movement will emerge in the Kurdistan region. The majority of Kurds do not seek an Islamic state or government and the region currently has no strong autonomous Islamic institutions that can challenge the secular nationalist parties and their entrenched patronage networks — which have deepened with the presence of oil revenues.

The fragmentation of party politics and need for coalition governance outside the KDP-PUK strategic agreement also may help balance power in the Iraqi Kurdistan parliament and provincial councils. What is less certain, however, is the extent to which greater Islamic group influences will affect the KRG’s political, economic and social development. Gaining greater Islamic party buy-in may enhance local representation, but it will likely require trade-offs with the KRG’s fast-track development and political agendas as a means of assuring local and regional stability.