Riyadh has reached out to tribal sheikhs in southern Iraq in what some see as a continuation of the ongoing Saudi-Iranian competition for influence in the region. 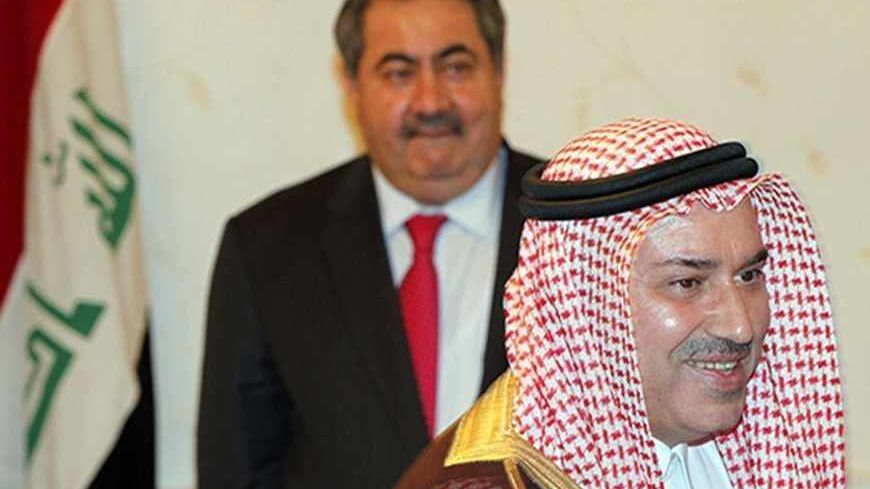 Iraqi Foreign Minister Hoshiyar Zebari (back) receives the then newly appointed ambassador of Saudi Arabia to Iraq, Mohanned Sleman al-Zaid, at the headquarters of the Foreign Ministry in Baghdad, March 26, 2012. - REUTERS/Mohammed Ameen

It's hard to determine the exact features of Saudi Arabia’s policy in Iraq, because of its conservative and secretive nature. It is no secret to anyone that Saudi Arabia is not very friendly toward the Iraqi government — which is dominated by Shiite parties — or toward Prime Minister Nouri al-Maliki.

According to leaked US cables from diplomats who met with the Saudi king, the latter does not trust Maliki and considers him an Iranian agent. Despite this, a few months ago, Maliki made statements regarding the possibility of establishing an “axis of moderation” that includes Iraq, Saudi Arabia and Jordan, to counter what he considered the “axis of extremism” that supports the Muslim Brotherhood and some hard-line organizations — an apparent reference to Qatar and Turkey.

These statements have raised speculations about breaking the ice between the two parties. Some have even talked about a potential normalization of relations. Yet the developments of the Syrian crisis and the two countries’ opposing stances on it suggest that such a rapprochement remains unattainable.

Saudi media outlets — especially those close to the royal family, such as the daily Asharq Al-Awsat that is owned by the crown prince — strongly criticize the Maliki government, particularly in opinion articles that are written by influential journalists in Saudi Arabia.

Moreover, Saudi circles believe that the current conflict in Syria is an extension of the Saudi-Iranian conflict, which intensified following the fall of former President Saddam Hussein’s regime in 2003. It seems that for Saudi Arabia, bringing Syria out of Iran's sphere of influence is necessary to counter the effects of Iran's significant influence in Iraq. Saudi Arabia’s preoccupation with fighting the regime of President Bashar al-Assad in Syria — and opposing the Muslim Brotherhood in Egypt and elsewhere — probably justifies Riyadh’s decreasing concern with Iraqi affairs. Nevertheless, the gradual shift of the Fertile Crescent into an arena of overlapping conflicts makes the separation of issues a sort of theoretical luxury.

The role of Saudi Arabia in Iraq has come up on two recent occasions. First, there were allegations that a Saudi spy plane had violated Iraqi airspace and carried out a reconnaissance mission in Iraq’s southern regions. There was also an attempt to link that incident to the existence of a prison in this area, in which Saudi nationals belonging to al-Qaeda are held.

Second, there have been reports that Saudi Arabia sent invitations to Iraqi tribal leaders to go on pilgrimage and meet with the Saudi king, a move Shiite politicians considered unacceptable interference in Iraq's internal affairs. Some tribal leaders confirmed the existence of such invitations, although they disagreed on the appropriate response to them.

If true, these reports will show once again that Saudi Arabia is still far from recognizing the status quo in Iraq. The invitations sent to tribal sheikhs represent a calculated intervention to flirt with their Arab identity.

Saudi Arabia has always known how to invoke and take advantage of identity politics in the region. As it continues to use sectarian pressures in Syria to separate the Sunni majority from the Assad regime, its project in Iraq emphasizes Arab nationalist mobilization against "Persian" influence. In Syria, Riyadh mobilizes the Sunni community against the ideas of Arab nationalism espoused by the Syrian regime, while it instigates a sort of Arab national solidarity against the pro-Iranian Shiite political Islam. Meanwhile, Iran tries to take advantage of Shiite complaints in Bahrain and the Eastern parts of Saudi Arabia in order to extend its influence in the Gulf. In return, the Saudis believe that reviving feelings of Arab nationalism in southern Iraq may help not only to reduce Iranian influence there, but could also reach the Arab minority in the Iranian region of Ahvaz, where there is a deep feeling of resentment toward the Iranian regime.

It is too early to make a judgment on the Saudis' objectives. The only thing certain is that the conflict between Iran and Saudi Arabia over influence in the Fertile Crescent is continuing, and becoming more and more complex every day.

Harith Hasan is an Iraqi scholar and writer. He has a PhD in political science and his main research interests are state-society relations and identity politics in Iraq and the Arab Mashriq. On Twitter: @harith_hasan