Al-Qaeda continues to gain strength in Iraq, taxing the residents of Mosul, attacking minorities and "collaborators" and making the city a base of operations in Ninevah province. 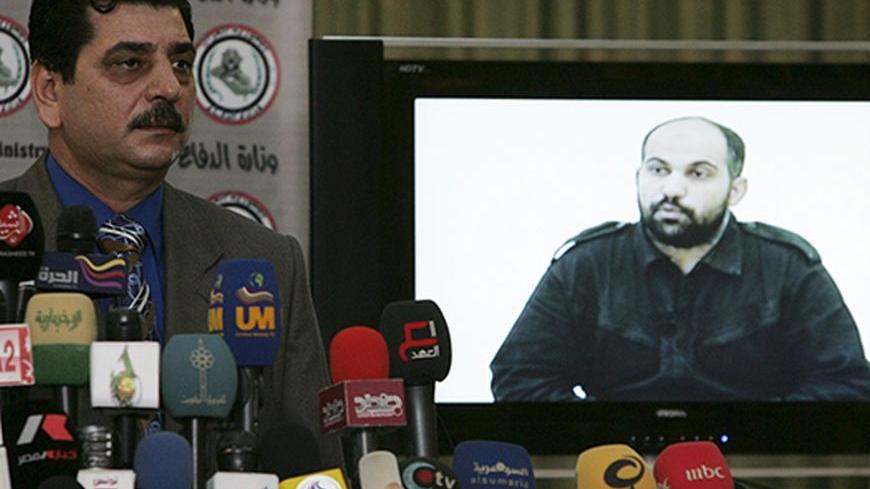 Iraq's Defense Ministry spokesman Mohammed al-Askari holds a news conference in Baghdad, Jan. 18, 2010. Askari showed a picture of an al-Qaeda member who officials say is a pharmacist responsible for killing military officers and wounding Iraqi police at a hospital in Mosul. - REUTERS/Saad Shalash

Mosul, the capital of Ninevah province, has become one of the most important strongholds of al-Qaeda in Iraq. The city’s large area and its borders with Syria and Turkey make it of strategic value to members of the organization fighting in Iraq and Syria. Since establishing themselves in Mosul, al-Qaeda militants have managed to build intricate networks for funding, supplies and mobilization to reinforce their presence and gradually take over the city.

During the past few months, al-Qaeda has managed to multiply its internal funding sources through a broad network of tax collection from large companies, associations, businessmen and owners of small shops in Mosul. It increased the tax imposed on a variety of commercial activities and enforces its tax policies with such “penalties” as murder, abduction and bombing the homes of those who fall behind on payments.

No major or minor commercial activity can be carried out without al-Qaeda taking its share. This ranges from small-scale operations, like selling vegetables, to larger undertakings, such as services and construction projects across the province. According to Mosul residents who spoke to Al-Monitor by phone on condition of anonymity, mobile phone companies have had to pay lump sums to the organization to keep their transmission facilities up and running. Those of one company were bombed when it was late in making payments.

Government forces led by Gen. Mahdi Gharawi, commander of the province’s police, launched a campaign in 2012 against al-Qaeda's funding. Gharawi declared Mosul to be “the main internal funder of terrorist organizations.” Al-Qaeda is thought to take in some $8 million a month from the inhabitants of Mosul, while other estimates put that figure much higher.

The government's effort did not produce a solution to the problem, taking place as it did during a dispute between the provincial administration, which was demanding oversight of security issues, and the central government, which was in charge of security. This disagreement negatively affected the relationship between the locals and Iraqi security forces. On the one hand, the Sunni majority in Mosul considers the state security forces a tool of the Shiite-dominated government and therefore does not trust them. On the other hand, Mosul residents fear al-Qaeda taking revenge on their families or against them personally if they cooperate with the security forces. The organization has sent a number of messages indicating that it does not think twice about retaliating against those who “collaborate” with the government.

In September, al-Qaeda militants bombed the homes of select policemen and army officers to punish them for joining the security forces. The attacks were launched shortly after the federal government announced that it was ready to welcome former army officers from Mosul into its ranks.

Al-Qaeda has benefited from the growing sectarian tensions in Iraq and has adopted tactics to help it gain the trust of Mosul's Sunni inhabitants — such as by preventing sporadic acts of violence, like booby-trapped car explosions  — and presents itself as their protector. Furthermore, al-Qaeda has succeeded in taking advantage of events in Syria and the widening rift between Iraqi Sunnis and the Iraqi government to attract followers in a city full of unemployed youth.

By strengthening its organization, broadening its funding and playing off sectarian feelings, the al-Qaeda-affiliated Islamic State of Iraq and al-Sham (ISIS) has managed to surpass competing armed groups, among them those affiliated with the Baath Party. In the past few months, the group launched attacks on non-Sunni religious minorities — including the Shabaks, the Shiite Turkmen and the Yazidis — in an attempt to alter the demographics and make Mosul and its environs entirely Sunni. In one of these attacks, it detonated a car bomb at an elementary school in an area inhabited by Shiite Turkmen.

It is difficult to say whether the organization's campaign against minorities is being received positively by most Sunnis in the Mosul area, despite the organization marketing it as revenge against the mistreatment of Sunnis by the Shiite government. It is obvious, however, that a general state of terror has taken hold in the province, leading the majority to prefer to remain in the background, in silence. This applies equally to Ninevah government officials. The media platforms of Gov. Atheel al-Nujaifi lack any statements condemning the acts targeting Mosul's minorities. Some of those with whom Al-Monitor spoke attributed this absence to a fear of clashing with al-Qaeda. Others asserted that the local administration has a relationship with the militants, and that some important local figures must pay taxes to al-Qaeda.

In the absence of a solution to the dispute over powers and the mutual lack of trust between the federal and provincial governments, any effort to confront al-Qaeda’s increasing influence in Mosul will find success elusive.

Harith Hasan is an Iraqi scholar and writer. He has a PhD in political science, and his main research interests are state–society relations and identity politics in Iraq and the Arab Mashriq. On Twitter: @harith_hasan