Iranian President Hassan Rouhani lauds the Iranian people for support of their “initial steps” in securing a first-step nuclear agreement. 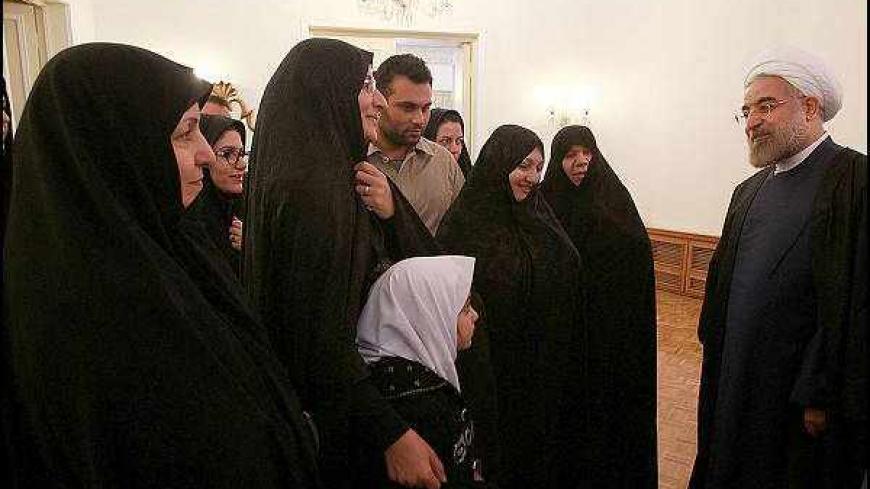 Iranian President Hassan Rouhani meets with the families of Iran's "nuclear martyrs" in this photo released by his office on Nov. 24, 2013. The families also formed part of a news conference Rouhani held on Nov. 24 to discuss the nuclear deal reached earlier in the day in Geneva. - www.president.ir

TEHRAN, Iran — A jubilant Iranian President Hassan Rouhani had the deal in hand. It was his happiest day since taking office, maybe happier even than Inauguration Day. The veteran negotiator, in White House-style, did his media briefing from the presidential office’s garden. A small group of journalists, including myself, were invited to meet him and listen to his post-deal speech.

It was an opportunity for him to congratulate the Iranian people on the deal. “The Iranian nation once again displayed dignity and grandeur in the … nuclear talks and made Western governments understand that they will get a positive outcome whenever they show respect to the Iranian nation, and that threats or intimidation will not work.” The Iranian president stressed the importance of mutual confidence. “We should have trust with others, and especially Western countries; however, we have a long path to reach complete trust, of which we have taken the initial steps.” He added, “The right to enrichment inside the country is the second achievement. Any interpretation is possible, but the draft says Iran can enrich uranium, and I would declare to the nation that our enrichment activities will continue as in the past.”

It was a “Rouhani moment,” with him thanking everyone: Supreme Leader Ayatollah Ali Khamenei, the team, the people and the “nuclear martyrs.” To everyone’s surprise, a little girl — perhaps 4 or 5 years old — appeared onstage, and Rouhani raised her and kissed her. She was then joined by around seven or eight men and women, whom he introduced as families of the slain nuclear scientists. It was clear that there was a message between the lines; he wanted to give the deal a spiritual touch, one that Iranians understand very well.

Rouhani is aware that grassroots questions are circulating; people are asking for details — they want to know what happened and where did Iran give and what did it gain. These questions are expected to be answered by Foreign Minister Mohammad Javad Zarif, who was dubbed on social networks by some Iranians as the “ambassador of peace.” The networks circulated his picture and his last negotiations tweet: “We have reached an agreement.”

To Rouhani’s right stood Ali Akbar Salehi, head of the Atomic Energy Agency of Iran, and a former foreign minister. As the president finished his speech, I approached Salehi, asking about the effect of downgrading the uranium enrichment on Iran’s nuclear program. He said, “No real effect, from the beginning, in my first term as head of the Iranian nuclear agency, we told them we wouldn’t mind doing that, and today we did it voluntarily and it won’t affect our nuclear activities.”

According to Salehi, Iran got what it wants from the agreement. “We can enrich uranium in Iran, we can use Arak. All what we wish is that the other parties keep their word. If they back away, we’ll back away, too.” He stressed that Iran was looking for a win-win relationship. “Our approach was based on goodwill, and we hope they’ll deal with us the same way. We want the Nuclear Non-Proliferation Treaty to be stronger.” Salehi concluded that Iran is ready to work with the others for a better world.

The deal is for six months, which means there will be quite some time to judge its efficacy. Still, Iran reacted quickly to it — its currency making gains against the dollar and gold, while a new record was set at the Tehran stock exchange when more than 80,000 transactions were made. It’s a brief reflection of how people felt just hours after the announcement, and this also gives an indication of the path Iran is taking in case the six months are extended to a year or an indefinite period.