Hamas' show of force on the streets of Gaza is not resonating with a population enduring a severe electricity and economic crisis. 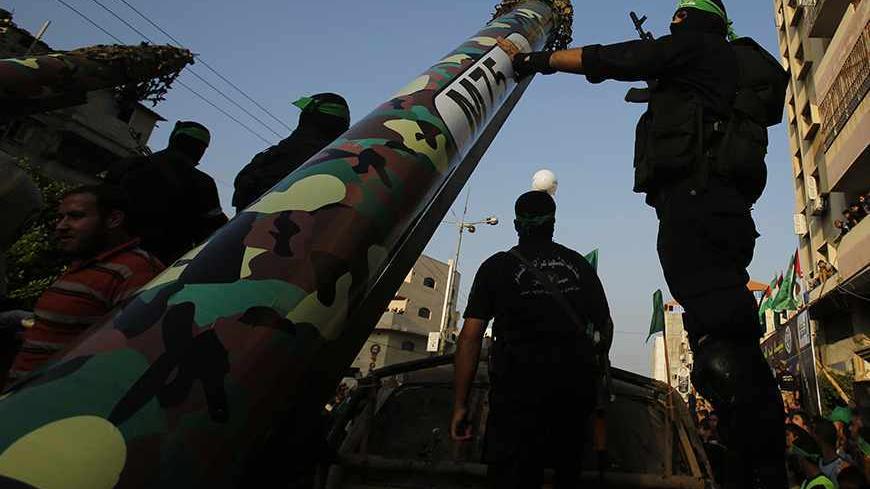 GAZA CITY, Gaza Strip — The first anniversary of the eight-day war waged by Israel in November 2012 was marked in the Gaza Strip by a severe humanitarian crisis spurred by the area’s protracted electricity shortage. This situation was apparent in the daily lives of local citizens and led to a stoppage in the operation of wastewater pumping stations, which flooded the streets of some neighborhoods, while general hospitals curtailed their services and the Rafah border crossing with Egypt remained shut.

Despite the deteriorating economic situation in Gaza and the worsening humanitarian crisis, Palestinian factions, particularly Hamas and Islamic Jihad, commemorated the first anniversary of the second war with Israel with a major show of force and the holding of military parades through many streets of the besieged Strip.

Thousands of leaders and members of the Izz ad-Din al-Qassam Brigades participated in military parades that covered numerous areas of the Gaza Strip with masked gunmen carrying various types of weapons. These included a wide range of projectiles as well as the M-75 rocket, which has a range of up to 75 kilometers (46.6 miles), and was launched during the war for the first time by Palestinians toward Tel Aviv.

A leader of the al-Qassam Brigades stated during one of the parades in Gaza attended by Al-Monitor, “The Israeli enemy and leaders had knelt before the resistance movement and put an end to the war pursuant to conditions laid forth by the resistance.” He added, “The Zionist occupation forces requested a cease fire through intermediaries 48 hours into the Shale Stones Battle, but the al-Qassam brigades rejected the demand because we wanted to extend the battle for as long as possible.”

Israel started the war on Nov. 14, 2012, when it assassinated the deputy commander of the al-Qassam Brigades in Gaza City, which sparked an eight-day war. This was the second such war in the span of four years, during which 174 Palestinians were killed, among them 30 children and 13 women, in addition to 1,500 wounded.

“The Quds Brigades and all other armed factions of the Palestinian resistance movement had prepared for the next battle. Any future confrontation with the enemy would be decisive,” Abu Malek, an al-Quds Brigades commander — the military arm of Islamic Jihad — said while attending the commemorative military parade in Gaza City.

But the demonstration of force did not resonate with many Gazans suffering from a continued electricity and economic crisis due to the siege, and political bickering between Hamas in Gaza and Fatah in Ramallah.

“The number of gunmen, the level of armament, and the collective participation of resistance leaders is a reflection of the grave political crisis afflicting the resistance movement, which is incapable of formulating any political initiatives or reconciling with prevailing regional changes. Thus, it has to resort to the gun, as the sole manifestation of its identity, lacking any real justification or political reasoning in defense of its actions,” Palestinian activist Ahmed Omar posted on his Facebook page.

Gazans, on the other hand, whose homes were flooded with mud and wastewater in some of the Strip’s neighborhoods, were more preoccupied with the problems in their daily lives. They have also been grappling with how to best overcome the environmental and humanitarian crisis that they have been suffering since the electricity plant went out of commission due to a lack of fuel needed to operate it, which in turn was the result of political disagreements that exist between the Gaza and Ramallah governments.

Baha Abu Baraka, 40, who hails from the al-Zeitoun neighborhood south of Gaza City, expressed overwhelming anger at the flow of sewage water into his neighborhood’s homes. The Gaza’s municipality ceased operating the nearby pumping station as a result of the power outages and the municipality’s financial inability to operate power generators for extended periods of time.

“There is no life here. We are not human beings. We are politically exploited by this faction or that for partisan political gains, while we and our children drown in mud and darkness,” Abu Baraka told Al-Monitor.

Along Nasr Street in Gaza City, which is completely dark save for the headlights of passing cars, Palestinians waiting in a long line to get bread from the Family Bakery were angered by delays and the power outage.

Mahmoud al-Wahidi, 35, talked to Al-Monitor while he stood in line inside the bakery. “I’ve been standing here for almost half an hour, and might have to wait for another half hour to get bread. My wife and children are home, waiting for me in the dark. I have grown to hate myself and hate Gaza as well,” he lamented.

“They organize marches and military parades, drive around in SUV’s, and tell us that they do not have fuel for the power plant. Isn’t there just one single rational man who can shield us from this injustice that we have to endure?” he added.

The stifling political, economic and humanitarian crises suffered by Gaza might not seem like something that is new to the local population. The general sentiment may be more pessimistic now, however, because Hamas is less capable of bolstering its own standing through foreign Islamist forces that ascended to, and quickly fell from, power during the Arab Spring revolutions.