The siege on Gaza prompted a sewage treatment plant to cease operating, flooding the nearby neighborhood with human waste. 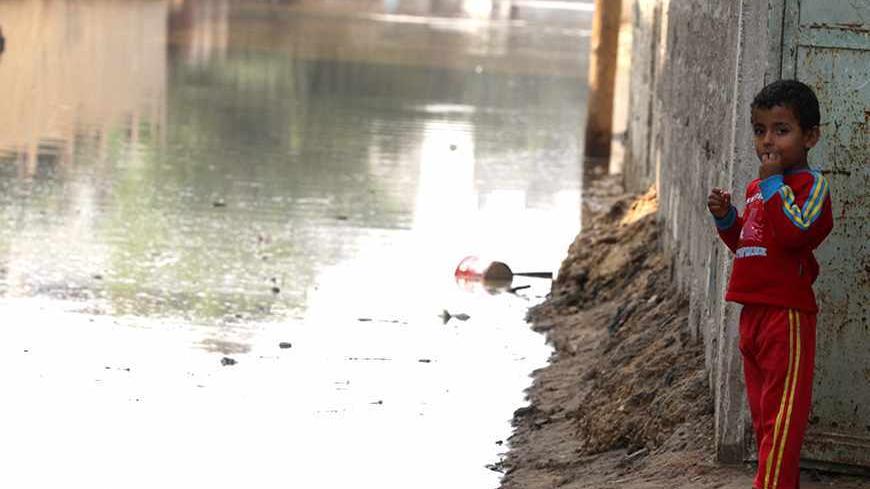 A child stands in front of a river of sewage that swept through his neighborhood on the evening of Nov. 14 in Gaza City, Nov.15, 2013.

GAZA CITY — The inhabitants of al-Zaytoun neighborhood, in eastern Gaza City, were stunned by the flood of wastewater invading their homes on Nov. 14, causing extensive damage to property. This came approximately two days after the area’s treatment plant went out of commission as a result of the worsening electricity crisis and the lack of fuel needed to keep the plant in operation.

Gazans have been facing the catastrophic effects of 18-hour-a-day power outages on basic human rights, particularly their economic and social rights, according to a study published by the Al Mezan Center for Human Rights.

The power crisis has been growing worse since Egypt launched its security campaign against tunnels that lie along the border with Gaza, which constituted an essential source of fuel used to operate Gaza’s only functioning power station. The power crisis also worsened when Egyptian authorities halted the export of Qatari fuel to Gaza for security reasons.

Sewage water rose in the aforementioned neighborhood by nearly 110 centimeters (3 1/4 feet) as observed by Al-Monitor, flooding its alleys and streets. Dozens of students missed school as they were unable to traverse roads submerged in wastewater. Other students, however, chose to climb over walls and other obstacles in order not to miss classes.

Mountaser Abou Zeid, 13, stood in front of his house as he watched the agony of passersby as they negotiated a path through the neighborhood’s streets. “I did not go to school today because there is no way open for me to take. Maybe I could cross the street and go to school if you laid down rocks for us to walk on.”

Shortly after Abou Zeid’s conversation with Al-Monitor, a donkey cart passed by and began ferrying a number of children who had been standing by the side of the road in their school uniforms. Upon seeing them, Abou Zeid rushed inside the house to get his school bag and ran after the cart.

A few meters away, Khalil al-Haddad, 60, sat in a plastic chair on the elevated porch of his home watching the neighborhood kids, whom he prevented from playing in the sewage water. “What happened is that, on one end, Israel besieges us, and on the other, Egypt prevents us from receiving fuel and electricity. As a result, here we are, caught between the two of them, drowning in mud and filth,” he told Al-Monitor.

He explained that their lives would be in greater danger if the crisis continued, particularly now that winter is drawing near, which would likely increase wastewater levels and lead to a recurrence of the flooding.

During Al-Monitor’s tour of the area, a young woman named Mariam appeared on the balcony of her house to survey the condition of the street. “Welcome to the new Nile River!” she said cynically. The sewage eruption has prevented Mariam from attending her university classes. “Should I wade in sewage water just to reach my university? No one is pleased with this situation. Radical solutions must be implemented. The world must intervene and ask Egypt to allow the passage of fuel needed for the operation of the electric power plant. Furthermore, the Israeli siege upon us must end,” she complained to Al-Monitor.

One day before the incident, the municipalities of the Gaza Strip issued warnings about a great environmental catastrophe occurring as a result of fuel running out, thus leading to power outages.

During a press conference held in Gaza on Nov. 13, and attended by Al-Monitor, Gaza’s mayors issued an urgent call for help to deal with the stifling living crisis that has befallen the Strip.

During the conference, Gaza’s Mayor Rafic Makki warned of the worsening health menace, as wastewater accumulated in ponds due to the lack of fuel needed to treat them. He explained that the municipalities had begun implementing austerity measures to avoid any risks, and to thwart possible threats to the environment and people’s health.

A short time later, the municipality of Gaza announced, in a written statement published in the media, that the wastewater pumping station had completely ceased to operate, having exhausted its fuel supply.

“Stoppage in the operation of the Gaza City station forewarns of a dangerous environmental catastrophe that would expose citizen’s houses located around the plant to the danger of being submerged in sewage water within hours,” the statement read. It also pointed out that all of the Strip’s stations faced the same fate in the next few days, if the municipality was not supplied with the needed fuel.

Citizens’ fears are increasing as the sewage level rises and spreads to other neighborhoods, particularly now, with winter approaching. In the meantime, other neighborhoods have begun implementing preventive measures, such as erecting sand barricades to prevent water from entering their homes, if another flood were to occur.

The director general of the Department of Sanitation in Gaza municipality, Saad Eddine Alatbash, warned that if the crisis lasted the next few days, it would lead to new sewage floods in other regions, with wastewater spreading over larger surface areas.

“As a result of the power outages and the depletion of the municipality’s fuel reserves, the station stopped pumping wastewater to the treatment plants. For the past month and a half, these plants have simply been pumping the water out to sea without treating it, for the same reasons,” said Altabash, speaking to Al-Monitor.

He explained that the station collects water from many areas in Gaza City, among them the Sabra, Shoujaiyah, al-Tuffah and Sheikh Radwan neighborhoods, at a rate of 1,000 cubic meters (35,000 cubic feet) or more per hour, up to 24,000 to 40,000 cubic meters per day.

“The stoppage of the pump resulted in sewage overflowing inside the station, and submerging it under two meters of wastewater. In turn, this led to the flooding of half a square kilometer around it, which resulted in 20,000 people being affected, and the evacuation of some families from their homes,” he added.

Altabash went on to say that, one and a half months after the crisis began, his municipality was no longer able to cope with the situation, but that it still possessed a small amount of fuel used to operate the pumps that deliver water to citizens’ homes. He warned that they too would become inoperable soon if the crisis continues unchecked.