Relationships outside marriage remain taboo in Palestinian society, but some are daring to challenge tradition. 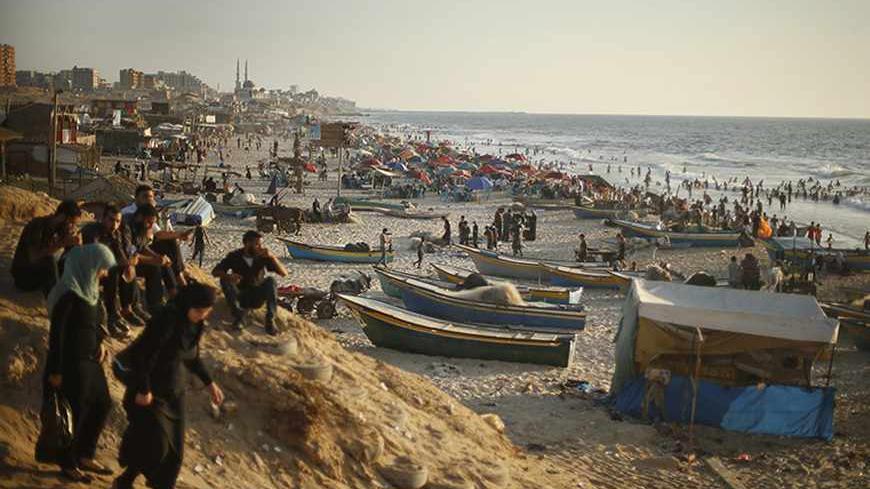 GAZA CITY, Gaza Strip — Not being able to get basic goods, not having electricity for more than 11 hours a day and not being able to travel easily are familiar hardships the more than 1.7 million Palestinians in Gaza face, but these are not the only frustrations. In addition to the strain on Palestinians' lives due to the ongoing Egyptian-Israeli siege, unmarried couples in Gaza are also struggling to maintain their relationships because they cannot easily meet in public.

The taboo of unmarried couples and the complications of communicating directly with one’s partner are new to Palestinian society (and to Middle Eastern society in general). In the impoverished coastal enclave of only 360 square kilometers (139 square miles), it is difficult for a couple to meet without fear of being seen by someone they know. Palestinian tradition prohibits unmarried couples from meeting, although a few families might allow their daughter to meet with a man if he is serious and willing to officially propose to her.

Problematic behavior involving the opposite sex usually focuses on females rather than males, because in a patriarchal society like the Palestinians', young men are usually free to do as they please, free of the tight parental control that girls face. The behavior of women and girls, including the words they use, are constantly monitored by male relatives, seemingly 24 hours a day.

Gender restrictions are not only limited to relationships, but also include the few people who have friends of the opposite sex. Unless socializing in groups, gender-mixing friendships are frowned upon. This custom is more rooted in cultural traditions than any specific religious decree.

Until now, men and women in Gaza have typically married the “traditional” way. That is, a male can only see the girl at her parent’s house once before the couple decides to marry. Societal habits are changing, however, and in the process challenging the traditional concept of a relationship. Whereas previously, women were largely restricted to household chores and raising children, the empowerment of women through labor and the economy is prompting a shift in gender relations.

With the number of working women increasing in Gaza, there are more opportunities for gender mixing and, as a result, relationships based on mutual interest and love, rather than social requirements, are developing. Tradition remains strong, however, and although such relationships occur, it remains difficult for an unmarried couple to publicly engage in their relationship without the threat of official sanction by the courts. Occasional crackdowns by Hamas police on couples meeting in public places without marriage certificates has prompted self-restrictions by many unmarried couples.

Lama (a pseudonym), 28, acknowledged that she cannot really get to know a man due to the difficulties of meeting, even when the relationship is serious and could lead to marriage. “I can go out with a man, of course, but I’ll be risking my reputation, because people here talk about a girl going out alone with a man. I don’t want to be in that situation,” she told Al-Monitor.

With the emergence of social media and smartphones, contact between couples has improved somewhat, but remains inadequate. One 29-year-old man who spoke on condition of anonymity revealed to Al-Monitor that Skype is the main way he communicates with his girlfriend because he is uncomfortable going out with her due to social constraints. Despite the challenges he faces, he thinks such social restrictions are important, because, he contended, the majority of men are not serious about their relationships. “I don’t mind families’ watching over their sons' and daughters' relationships. It’s always better to have things under the spotlight,” he explained.

Samir Quta, a psychology and sociology expert, said that it is preferable for couples to meet a number of times before they decide whether to get married, but that does not necessarily require a deviation from social customs. “I call the parents to give them a better understanding of their childrens’ relationships, which can help them avoid social problems that can be caused by unacceptable relationships outside their observation,” Quta explained to Al-Monitor.

The issue is not only about couples, but gender relationships in general in a conservative society. Boys and girls are usually separated beginning in grade three in governmental schools and most private ones. Not surprisingly, as young adults they find it uncomfortable when they come into contact with one another in college.

Fatma Salim, a 24-year-old teacher, said that she totally respects the traditions to which the genders are restricted in Gaza. Salim believes one cannot ask boys and girls who have been separated for most of their lives to act in a healthy way when they start communicating at a relative advanced age. “Instead of trying to extinguish these traditions, I ask for putting the two genders in a healthy atmosphere from day one in kindergarten so they can communicate properly for the rest of their lives,” Salim suggested.