Younger Iranians are beginning to break old taboos by cohabitating without marriage. 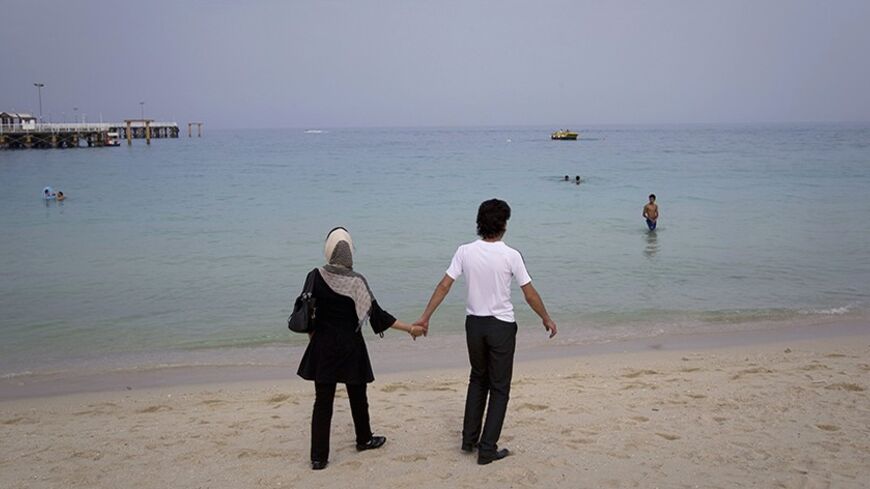 A rather new element of Iran’s paradoxical society is visible in some homes: cohabitation of unmarried couples. A small group of young and a smaller group of elder avant-garde intellectuals and artists had chosen this lifestyle in the past 30 years, but according to Iranian officials, it is on the rise.

Couples living together without being married is still quite uncommon, and in some circles even unheard of, particularly for the traditional and religious types who would deem this lifestyle unacceptable. However, that this trend has caused authorities to speak out against it is an indication that it is a serious issue for a country that espouses traditional Islamic values and is facing a declining birth rate.

Cohabitation seems almost exclusive to Iran's bigger and busier cities, which traditionally have been progressive and have continued to be more progressive despite cultural and religious pressure. Tehran holds the highest numbers in this category, although not surprisingly, no official statistics exist regarding one of the Islamic Republic of Iran’s worst nightmares, particularly at a time when one of the most significant priorities of Supreme Leader Ayatollah Ali Khamenei seems to be to double the population and counter Iran's worrisome declining birth rate.

In an interview with Iran’s ILNA news agency, Morteza Talaee, chairman of the sociocultural commission of the Tehran City Council and previously the commander of the greater Tehran police force, has expressed concern over what he describes as the increasing phenomenon of cohabitation among unmarried young couples, most of whom he says are college students. Cases of cohabitation sans nuptials are said to be mostly seen in wealthier parts of Tehran, especially northern Tehran, he added.

Talaee has warned against this up-and-coming lifestyle as a social danger for the country. He considers cohabitation with no strings attached as an issue with deeply negative effects on married lives, a major factor in young people’s reluctance to marry and a contributing element to the rising figures on prostitution in the bigger cities.

The rising age for exchanging marital vows, tackling financial difficulties by splitting costs, uncomplicated accessibility to sexual intimacy, fights with parents and siblings concluding in the choice of leaving home and the lower risk of getting caught on the street by security forces in the course of courtship are among the primary reasons for braving the social elements to live with a lover.

Parastoo, a 31-year-old English teacher at a private kindergarten in western Tehran, has been living with her boyfriend of two years for five months. She told Al-Monitor, “It was by no means easy to convince my parents. Playing the age card and arguing that I’m not financially dependent on them were certainly helpful. But it took almost a year to convince them. And, even then, my dad begrudgingly accepted. He is still not onboard with it. I didn’t want bad blood between us, especially since my folks have always been understanding and sensitive toward my wants, so I waited it out, had countless arguments and endured plenty of death glares before getting their reluctant blessing to move out.”

Mohammad-Reza, a sociologist living in Tehran whose day job is research and writing told Al-Monitor that his main area of interest has been cohabitating couples, and he has made a relentless effort to select this as the topic of his PhD dissertation, but to no avail. He continued, "I’ve been studying these couples, gay and straight, closely for about two years. I hang out and chat with them quite a bit. And, I’m no stranger to this lifestyle myself. I’ve been in a relationship for nearly a year now and have been living with my girlfriend for eight months. Prior to this relationship, I lived with my ex-fiancee for a couple of months. This is a relatively new development in Iran, even in bigger and more modern cities. Most couples inclined to this lifestyle are somewhere on the age spectrum of early 30s to early 40s.”

Despite the gradually rising number of single women living on their own in Iran over the past couple years, even accepting this custom for single or divorced women is still tough for many. The issue is much more delicate when it comes to an unmarried couple sharing a home. This is primarily the reason for lying to landlords and neighbors regarding the couple’s marital status.

Majid, a single 43-year-old born into money who owns three Persian rug stores in Tehran, told Al-Monitor, “My mother has stubbornly been on my case for more than five years. I’m an only child, my dad passed away 10 years ago and my mother wants to see me ‘settle down.’” He went on to say, “I’m positive that no sooner than I marry someone, she’s going to be on my case all over again because she’d like to ‘see her grandkids before she dies.’ Then, she wouldn’t only be angering me, she may also anger my spouse and cause all sorts of conflict in my married life. I have no interest whatsoever in marriage and couldn’t take her nagging anymore. So I decided to move out. My girlfriend’s family is quite supportive. They’re neither traditional nor religious and have a son living in the UK who has been sharing a flat with his British girlfriend for about a decade, so they’re used to this concept.”

The taboo of sharing a space as an unmarried couple remains widespread and strong in Iran. For the government and the religious population, it is viewed as slighting the country’s Islamic principles. For many families, the issue is the societal shame they would face if their status were found out.

In spite of all this, there are other factors at play that lead to some unmarried couples’ enthusiasm for such living arrangements. Among them are, obviously, the benefits of living together without the social commitment of marriage. To some younger Iranians, even more important than that are the uncomplicated logistics of spending time together, and at times, having friends over without the usually related anxiety attached to gatherings of such a nature, such as families’ resentment.

In a nutshell, this may be yet another survival tactic despite the odds in a closed society, another instance of choosing a safe haven to enjoy forbidden fruit, under a roof and underground.