No end in sight for Gaza crisis

Until Egypt is in a position to push through an internal Palestinian settlement, the crisis in Gaza is likely to continue. 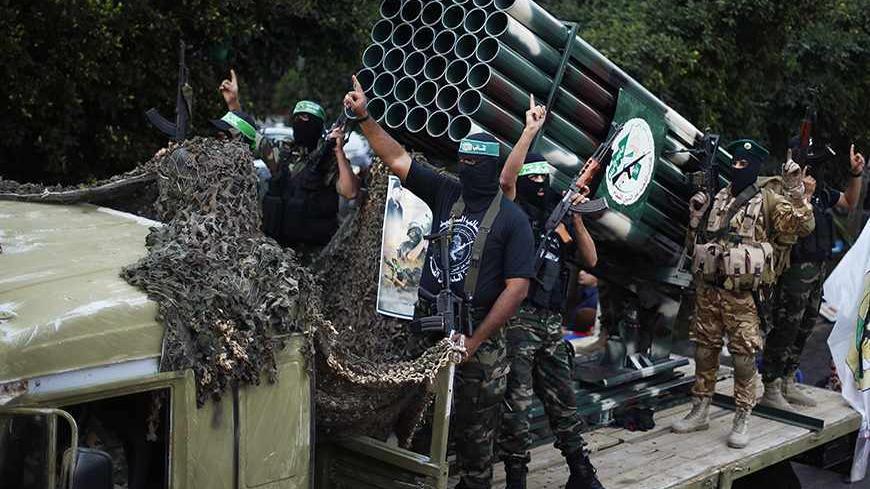 Once again, the fate of Gaza is gaining importance as the failure of Palestinian reconciliation, coupled with the deep rift between Hamas and the new Egyptian rulers, is being felt by every Palestinian in the Gaza Strip. The high-profile military parade by Islamists in Gaza on Nov. 14 shows that Hamas continues to be strong, despite not having been able to pay salaries to its employees for the past three months. The parade was held on the first anniversary of the war on Gaza, which had ended in a cease-fire worked out by then-Egyptian President Mohammed Morsi. Israeli fighter jets struck inside Gaza on Nov. 14 claiming that their attack was aimed at two locations from where rockets against Israel were launched. Islamic Jihad is said to be responsible for the attacked site, but no injuries or fatalities were reported.

The parade and clashes reflect both acts of strength and confidence and acts of desperation because of the dire economic situation facing Hamas. The Gaza government of Prime Minister Ismail Haniyeh has not shown any serious signs of weakening. Al-Monitor sources in Gaza insist that the Islamist movement is still strong, despite its recent regional losses in Syria and Egypt.

Palestinian President Mahmoud Abbas, who spent the last few days in Egypt, said from Cairo that he expects Egypt will pay closer attention to the Gaza situation in a few months once they tie up some of the loose ends — such as the new constitution — that resulted in the post-Morsi era. Independent Gazan sources told Al-Monitor that Palestinians in the Gaza Strip were hoping that Abbas would succeed in easing the siege from the Egyptian side, particularly regarding badly-needed fuel for running the electric generators. But Abbas’ visit produced no such result. The continuation of the siege, the inability to use the tunnels and the Egyptian opposition to any lessening of the siege from their side does not bode well for Hamas in the long term.

Publicly, Ramallah-based Palestinian officials believe that the road to resolving Gaza’s woes is best traveled through the implementation of the already agreed-to-reconciliation, which includes the elections as a way out of the deadlock.

However, there are some who are toying with the idea of more revolutionary mechanisms. Some are hoping for a popular uprising. Gazan Palestinians set up a Gaza Tamarod movement and have met with their Egyptian counterparts in the hope of learning from the lessons of the initiators of a popular uprising that led to the cessation of Morsi’s rule. However, some are skeptical of the chances of the success of Tamarod, which had called for massive demonstrations on Nov. 11. The call failed, but some in Gaza are still hoping that once the pressure eases people might still go out in the streets. Gaza, a small area that is tightly controlled by Hamas security forces, is not the same as Egypt. Some Palestinian and Arab planners believe that the only way to remove the Islamists from power in Gaza will be by using force, but this has been largely discounted as many believe that this will be a bloody act that no one will agree to be part of.

Abbas and his aides are hoping for the success of the present effort, which is a combination of drying up all sources of funding to Hamas, while keeping the Rafah crossing tightly controlled and preventing the re-emergence of the tunnel economy.

Abbas also said that the Arab League had officially delegated Egypt to implement the reconciliation process that was already signed by both the Palestine Liberation Organization and Hamas. Until the Egyptian leadership is able to do that, and unless the Hamas government collapses suddenly, there is little hope that any change will take place in the Gaza Strip. In the meantime, the Gaza Strip split continues to weaken Palestinians in general and the peace negotiators in particular, as they are unable to answer whether they can implement a peace agreement in Gaza or not.