Will Erdogan visit genocide memorial in 2015?

Turkey’s official position is not likely to change on the 100th anniversary of the Armenian genocide. 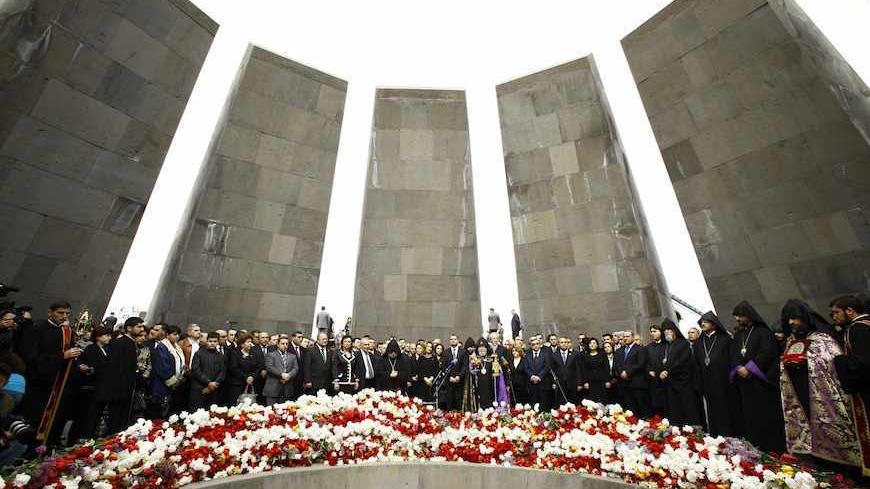 People take part in a commemoration ceremony to mark the anniversary of the 1915 mass killings of Armenians in the Ottoman Empire at the Armenian Genocide Memorial in Yerevan, Armenia, April 24, 2011. -

"It is very likely for the prime minister to go to Armenia, lay a wreath at the so-called Armenian genocide memorial and apologize to Armenians." This earth-shattering prediction is not based on information or reports. It's the accusation of a Turkish nationalist against Prime Minister Recep Tayyip Erdogan. Erdogan has done so many things to upset us, this nationalist is saying, don’t be surprised if he apologizes to the Armenians.

True. Erdogan’s trip to Diyarbakir, his use of the word "Kurdistan" and admitting openly that his government is negotiating with Kurdistan Workers Party (PKK) leader Abdullah Ocalan, are all breaking important taboos for Turkey. Can Erdogan break a similar taboo on the issue of the Armenian genocide?

What the non-Muslims have suffered in Turkey has rarely been on the prime minister's agenda. He hasn’t repeated his 2009 remarks that surprised everyone: "Those with different ethnic identities were expelled from our country. This, in fact, was the consequence of a fascist approach." No doubt that remark was alluding to the 1915 tragedy and other unfortunate events in Turkey’s history.

Erdogan now frequently describes Turkey as a mosaic made up of diverse ethnic identities. We often hear him mention Arabs, Kurds, Turks, Circassians and the Laz, but when describing this mosaic Erdogan never mentions Turkey’s long-standing non-Muslims such as Armenians, Greeks, Jews and Syriacs.

In my various articles for Al-Monitor, I have written that the Armenian genocide is no longer a taboo subject in Turkey, that new books on the subject are coming out daily and that there is a free, tolerant media environment for the subject. Civil society now remembers the victims of the Armenian genocide in observances on April 24. As the 100-year anniversary of the genocide approaches, civil society is debating what to do in 2015 and is preparing action plans to explain the genocide.

All these observances and publications indicate that the approach of the Turkish government to the issue has somewhat changed. Otherwise, the police would not have protected activists on April 24 from protesting extremist, nationalist groups.

But the freedom the government allows to civil society and intellectuals to debate and observe the genocide doesn’t mean a change to Turkey's official position on 1915. Reports leaked to the media about the preparations for 2015 by the government indicate that former official policies are going to prevail.

Turkish Foreign Minister Ahmet Davutoglu, in a visit to Switzerland at the end of October, conveyed to Swiss authorities Turkey’s sensitivity about a statue Armenians want to erect in Geneva. From these "sensitivities," we can conclude that there hasn't been an iota of change in Turkey’s official position.

From the leaked reports, we also understand that Davutoglu asked Switzerland to mediate between Turkey and Armenia. According to Foreign Ministry sources, if Armenia promises to withdraw from five of seven Azeri plots it is holding in the Karabakh region, Turkey would be ready to open the Armenian border.

The recent dialogue between the foreign minister and members of the parliamentary foreign affairs committee suggests that there are actually preparations to open the border. When a member of parliament from Igdir at the Armenian border said he was aware of some work at the closed border crossing, Davutoglu said, "We have such work going on. If we can persuade Azerbaijan, we can make a surprise. We are working on the border crossing."

Other aspects of Turkey’s preparations for 2015 can be detected from remarks by government spokesman Bulent Arinc: "2015 is the 100th year of both the Dardanelles and the claims of the Armenian genocide. We are working seriously. There is work on symposiums, conferences, panels, publications and documentaries. But we are also engaged in very special public diplomacy activities that could affect the entire world."

We also know that leading members of the government and opposition have met in the parliament to discuss Turkey’s 2015 strategy. Sadly, all these strategies don’t appear to be anything else but mere repetition of Turkey’s routine approaches.

The Turkish Historical Society is also preparing for 2015. Mehmet Metin Hulagu, president of the society, said it is working on a complete works of Turkey-Armenian relations in preparation for 2015.

When we put all these preparations and views of government officials together, we can predict that Turkey’s defensive attitude based on denials is not going to change in 2015. Though the Foreign Ministry is striving to improve Turkey’s image related to the Armenian issue with gestures such as opening the border, it also seems determined to combat the Armenians’ campaign for 2015.

In short, if Erdogan doesn’t turn the world upside down with a last-minute surprise, we are likely to see in 2015 a more refined and sophisticated version of Turkey’s denial policy of the past century.