Turkey  is preparing a diplomatic offensive to prevent the US and European countries from recognizing the events of 1915 as genocide, writes Orhan Kemal Cengiz. 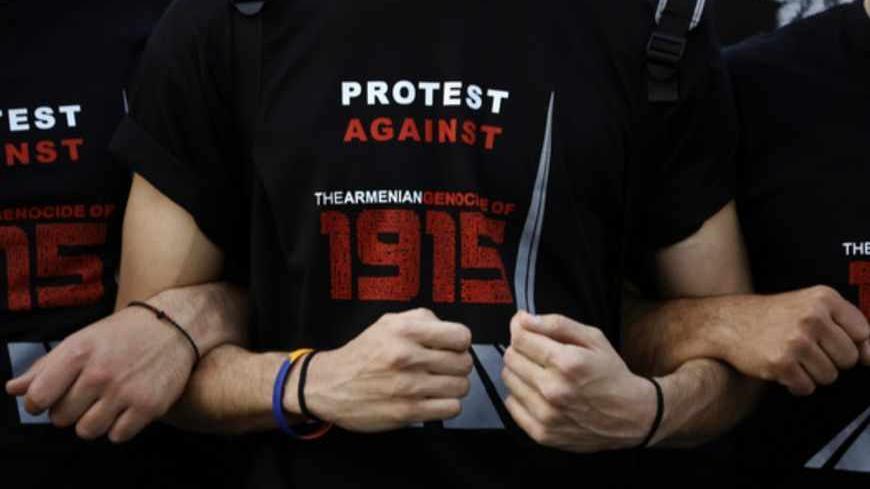 Armenian protesters shout slogans against Turkey during a demonstation near the Turkish Embassy in central Athens, April 24, 2013. - REUTERS/Yannis Behrakis

The groups that call the 1915 events in Turkey “genocide” filled Istanbul Taksim Square on April 24, along with Armenians who came from abroad to remember millions of Armenians who lost their lives and suffered untold agony on this land. Only five or six years ago, it was unthinkable that such an observance could be held in Turkey. These developments encourage optimism, but even as democratic and forward-looking Turkish faces were displayed in Istanbul, we also noticed that the Turkish Foreign Ministry was still repeating the clichés of the last 98 years that we all know so well.

The Foreign Ministry criticized the April 24 statement of US President Barack Obama with a tone bordering on condemnation: “We find this statement that ignores historic realities troubling in all its aspects, and regret it.” What led to this critical tone was Obama’s saying that the Armenians were mercilessly massacred and forced on a death march in the last days of the Ottoman Empire.

On one hand, Turkey has erased a yearslong taboo and is now debating 1915 freely as never before. In addition to the April 24 observances, people are openly expressing their views by referring to 1915 as “genocide” in print and visual media.

But on the other hand, looking at the official reactions of the Turkish government, you can’t find the slightest change. Why? Why is Turkey is trying to keep the world from debating an issue that is freely discussed in Turkey itself? Why was Obama’s statement received with such a stiff reaction, even though there was no mention of genocide? Why is Turkey, while taking serious steps to solve major questions such as the Kurdish issue, still repeating its century-old clichés on the Armenian issue?

All these appear to be part of Turkey’s strategy for 2015. While Armenia and the Armenian diaspora promote 2015 as a milestone for global recognition of genocide, the Turkish state, mobilized by defensive instincts, continues denying everything, just as it has been doing all these years.

It was known that the Turkish Foreign Ministry was preparing to counter the Armenian diaspora’s 2015 strategy.

Haberturk, in a report by Sibel Hurtas in September 2011, titled ‘’Foreign Ministry sends coded message to raise 2015 alarm,” said that in a secret message to Turkish embassies worldwide, Turkish diplomats were asked to monitor and prevent Armenian activities related to 2015.

In an incident in Denmark in December 2012, we noted that the secret message had served its purpose and Turkish ambassadors were acting in accordance with the official strategy. In response to an Armenian genocide exhibit at Copenhagen University in December 2012, the Turkish Embassy immediately opened an alternative exhibit. As you can easily surmise, according to the Turkish Embassy exhibit, the Armenian genocide never happened.

Barcin Yinanc of Hurriyet Daily News wrote on April 23, probably on information provided by the Foreign Ministry, that Turkey will not stop at developing counter arguments to Armenian genocide claims, but will also make efforts to normalize relations with Armenia before 2015.

Keeping all this in mind and rereading Turkey’s reaction to Obama’s message, it could be understood that Turkey’s message was not for today, but rather forward looking. It appears that Turkey, by reacting strongly today, was trying to ensure that the US president will not mention genocide in 2015.

Why is Turkey so worried by the use of this word? Because Ankara thinks that there could be legal ramifications of the US and European countries recognizing genocide.

From the international-law angle, whether Turkey’s acknowledgement of genocide has legally binding implications is open to debate. Even organizations such as the Elie Wiesel Foundation, which persistently says what happened in 1915 was unquestionably genocide, are saying that international conventions cannot be retroactive, and that is why there cannot be demands for land or compensation from Turkey. But while it looks difficult for the Armenians to win in international courts, that doesn’t rule out the possibility of individual countries taking legal action on their own.

For example, the cases brought against German insurance company Munich Re in California in 2003 within the framework of the 2000 Poochigan law should make one think. Pursuant to this law, German insurance companies that had insured Armenians in 1915 but did not pay damages were sued in California. The cases were dismissed because a federal appeals court in San Francisco abrogated the law. But the court's opinion on Movsesian v. Victorai Versicherung AG may make it easier to understand why Turkey is fighting so desperately. The court, while abrogating the law, mentioned that Obama had refrained from using the term “Armenian genocide” and indicated that the law might not be in harmony with US foreign policy. This conceivably could mean that should Obama and the US administration label the events of 1915 as genocide, the judicial system could change its mind accordingly.

We see that the Turkish government, fearing future sanctions, is continuing with the policy of denial, and this will not change before 2015. Whether Turkey will develop humane and rational policies once the fear of 2015 is past remains to be seen.

Orhan Kemal Cengiz is a human rights lawyer, columnist and former president of the Human Rights Agenda Association, a Turkish NGO that works on human-rights issues ranging from the prevention of torture to the rights of the mentally disabled.