What does Armenian diaspora want?

Portrayed as a unified obstruction group by Turkey, the diverse Armenian diaspora is eager to keep communication channels open with Turkey. 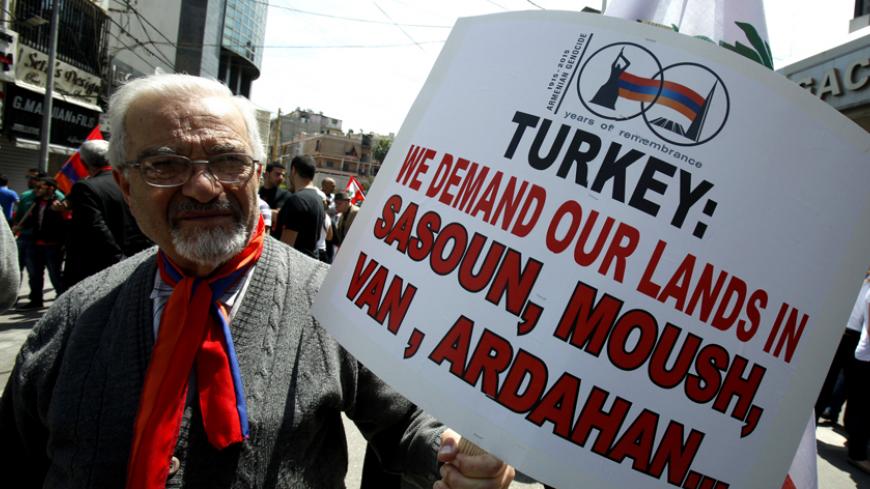 A Lebanese man of Armenian descent holds a sign during a march to downtown Beirut's Martyrs Square, April 24, 2013. - REUTERS/Sharif Karim

Turkish Prime Minister Ahmet Davutoglu delivered a heartwarming message Feb. 15: “[The] Armenian diaspora is not an enemy diaspora, it is ours. We will keep reaching out to them.” Yet on March 18, Turkish President Recep Tayyip Erdogan called upon the Armenian diaspora, saying, “Come let’s go over the archives. We can assign experts to evaluate all documents, bring your documents. It is not ethical to go traveling around different countries, distributing money, establishing lobbies to carry anti-Turkish propaganda.”

The Armenian diaspora has become the scapegoat for the Turkish-Armenian conflict. As the commemoration of the Armenian genocide centennial approaches, the Turkish government keeps sending mixed messages.

For example, on March 24, disturbing graffiti appeared on the wall of an Armenian church in Bakirkoy district of Istanbul. It read: “Who cares if you are all Armenians [referring to the liberal groups standing with the minorities with the slogan 'We are all Armenians'], one of us being Ogun Samast [the murderer of prominent Armenian Turkish author Hrant Dink] is sufficient.” The graffiti, which caused an uproar on social media, was promptly cleaned up. Another one appeared the next day reading: "Holy Year 1915."

The existence of the diaspora itself poses the most difficult question: How did the Armenian population decline to 60,000 from 2.5 million at the end of the 19th century in Anatolia? While Turkish views on the Armenian issue are divided, there seems to be a general conviction in Turkey that the Armenian diaspora is now strong enough to affect Turkey’s international politics.

In a piece for the Armenian Weekly, columnist Raffi Bedrosyan expressed the popular perception among Turks about the "evil" Armenian diaspora.

Bedrosyan lives in Canada, as a pianist and engineer working diligently to save the Armenian properties all around Anatolia. In September 2012, he gave the first Armenian piano concert since 1915 in the Surp Giragos church of Diyarbakir. He was also active in the reconstruction of the church.

Bedrosyan told Al-Monitor, “Erdogan, AKP [Justice and Development Party] and generally the Turkish state and state-controlled media misguidedly portray Armenians as three distinct groups: the good, the bad and the poor. The small Armenian community in Istanbul is regarded as the good — obedient, agreeable and easy to manipulate. The diaspora is regarded as the bad — the hateful enemy obsessed with genocide recognition, compensation and reparations. The Armenians in Armenia are regarded as the poor — completely desperate, dependent in every way on the Russians or the diaspora finances. [The] Turkish state and Erdogan fail to see that all three groups share a common pain since 1915 and a common goal for a just resolution. Yes, perhaps the diaspora is the most vocal among the three in pushing for acknowledgment and justice; however, Turkey has completely shut out any attempt for reconciliation with all three groups — closed borders with Armenia and no dialogue with any Armenian entity from neither diaspora nor Armenia regarding 1915. I am a minority within the Armenian diaspora advocating direct dialogue with Turkey, instead of pressuring Turkey through third states, but after several attempts for dialogue, encouraged by Davutoglu's statements such as 'Armenian diaspora is also our diaspora,' I have become disillusioned at the fake attempts by government officials and academia. I see absolutely no willingness at state level to acknowledge historical facts and truths.”

Indeed, Al-Monitor interviewed over 20 prominent Armenian academics, journalists, artists, pundits and pastors from Australia, United Kingdom, France, Canada, Syria and Lebanon, as well as different parts of the United States, and all agreed with Armenians’ demand for Turkey to officially recognize the genocide.

Kevork Oskanian, a research fellow at the Center for Russian, Eurasian and European Studies at the University of Birmingham in the United Kingdom, told Al-Monitor that beyond the shared wish of an official recognition of genocide, “there are actually a great number of different ideas [among the diaspora]. Some believe the matter should stop there; others go so far as to advocate the resurrection of the Sevres Treaty and Wilson’s arbitral award. The overwhelming majority are somewhere in between these two extremes, demanding, say, symbolic acts, or more concrete — financial — forms of compensation.”

Asked about the Armenians of the Levant, he said, “They have a special status in the diaspora partly because they are the oldest and best developed postgenocide communities; the ancestors of many people in France, the USA … passed through Lebanon or Syria before heading West, and, of course, 1915’s ‘killing fields’ were situated mostly in Syria, giving the place an added significance to Armenians worldwide. In that sense, the Syrian civil war has done immense damage to the Syrian Armenian community, which used to be one of the most dynamic in the region, and is considered the ‘mother community’ by many in the diaspora.”

Scout Tufankjian, a photojournalist and author of the upcoming book "There Is Only the Earth: Images from the Armenian Diaspora Project" that documents contemporary Armenian communities in more than 20 countries, told Al-Monitor, “Beyond [the recognition of genocide] views [of the diaspora] really vary — from those who would be satisfied with recognition to others who would push for reparations to others who would want to re-establish Western Armenia in our historic homeland.” A New York resident now, Tufankjian has just returned from a year in Istanbul.

“Views on modern Turkey also really vary," she added. "Some people hold that the responsibility for recognition lies with every Turkish citizen; others see this more as a governmental issue. Some people have no issue with traveling to eastern Turkey to tour the villages of their ancestors; others would never step foot in a Turkey that does not acknowledge the genocide. Even the attitude that people take toward the Kurdish apology [for their role in the genocide] has varied. Many have accepted it warmly and wholeheartedly and look for opportunities to work together; others distrust it.”

Nigol Bezjian, a filmmaker in Beirut, told Al-Monitor, “Armenians in the Levant may have more pragmatic and practical approach to deal with the past in this modern time due to the proximity to their homeland.” Bezjian, born in Aleppo, Syria, has directed the movie “I Left My Shoes in Istanbul” documenting the travels of a Lebanese Armenian to Istanbul in 2012.

Armen Georgian, a political analyst for France 24, is more pessimistic about the relations between the diaspora and Turkish government and the impact of Syrian civil war. “I see the stalemate continuing," he told Al-Monitor. "Last year, Erdogan made a statement on the Armenians that would have been unthinkable for a Turkish leader 20 years ago, but it fell far short of the unequivocal apology that the diaspora has been demanding for a century. This year Erdogan has taken a harder line, trying to make sure that the Gallipoli centenary overshadows the centenary commemorations in Yerevan. So I think the rift between him and the diaspora has widened. In addition, some members of the diaspora hold the Turkish government indirectly responsible for the destruction of Armenian heritage in Syria by the Islamic State.”

When asked whether the diaspora’s actions benefits Armenians in Turkey, Georgian said, “I think that international awareness of the genocide centenary makes it difficult for the Turkish government to take measures against Armenians — back in March 2010 the prime minister threatened to deport 100,000 Armenian migrants — but I would not rule out a further spike in tensions after April 24 that could make both Armenian migrants and Turkish citizens of Armenian origin feel uncomfortable.”

One of the biggest diaspora groups is in Southern California. Harut Sassounian, the publisher of the California Courier, expressed concerns about the reactions of rest of the world as well, wondering, “Is it sufficient to criticize Turkey for genocide denial, while ignoring world leaders who attend the Gallipoli ceremonies?”

Whatever your answer is to Sassounian’s question, one cannot deny that diverse and determined Armenian diaspora spread over 70 countries symbolizes survival rather than victimhood.