Turkey’s alleged collusion in the rebel takeover of a Syrian Armenian village has revived the ghosts of a bloody past. 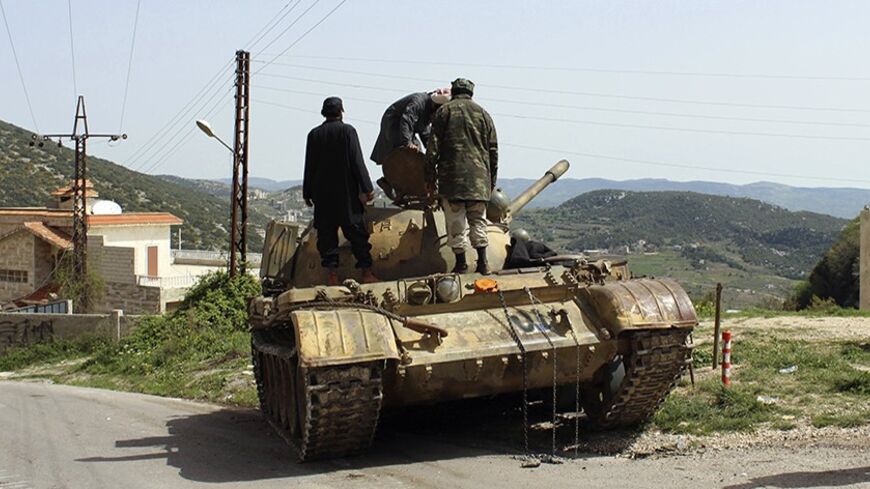 “The bearded men came to our home. They spoke Turkish. They rifled through our belongings and asked if we had guns.” This is how Sirpuhi Titizyan, a refugee from Kassab, a mainly Armenian village in northern Syria that was overrun by jihadists fighters on March 21, described her ordeal to Agos, an Istanbul-based Armenian weekly.

The frail octogenarian blamed Turkey’s prime minister, Recep Tayyip Erdogan, for Kassab’s fall. “Had Erdogan not cleared the path to Kassab, this many evil men would not have come,” Titizyan said. “May Allah blind Erdogan,” she thundered in a separate interview with Aris Nalci, a Turkish-Armenian blogger.

But readers of the mass circulation daily Hurriyet, which disingenuously claimed to have interviewed the sisters first, were offered a completely different version of events. When asked to respond to allegations that Turkey had helped to orchestrate the attack against Kassab, Sirpuhi was quoted as saying: “If this were so, why would the [Turkish] government be helping us?”

Sirpuhi and her sister Satenik have become the unwitting tools of a propaganda war pitting Syrian President Bashar al-Assad's regime and members of the Armenian diaspora against Turkey and its rebel proteges.

The Islamist fighters promised the women, who were among a handful of elderly people left behind, that they would help them join their fellow villagers in regime-controlled areas of Latakia and Tartus. But they handed the pair over to Turkish authorities in the neighboring province of Hatay instead.

The sisters have since been resettled in Vakifli, the sole Armenian-inhabited village left in Turkey since 1915.

That was when more than a million Armenians were slaughtered by Ottomans in what most historians concurred was the first genocide of the 20th century. Much of the violence took place as hundreds of thousands of Armenians were uprooted from their homes and ordered on a “death march” to the Syrian desert in Deir al-Zor.

Coming just weeks before the 99th anniversary of the genocide on April 24, the campaign in Kassab was bound to bruise Turkey’s image. And that is why, wrote Agos editor-in-chief, Rober Koptas, Turkey intervened with opposition fighters to prevent them from moving against Kassab in the past. So what prompted the change? he asked. Most Armenians, Koptas notes, would give the shortcut answer that it was “to harm Armenians.” But as he said, any harm suffered by Kassab’s Armenians would harm Turkey, too. The more likely reason that Turkey did not stand in the way of the rebels this time was because the conflict was tipping in the regime’s favor. Kassab would give the rebels a strategic foothold in Latakia and unprecedented access to the Mediterranean Sea. But at what price?

Claims that the jihadists had desecrated churches and beheaded Christians in Kassab have been debunked. And there has been only one civilian death reported so far. Yet, the Armenian National Committee of America (ANCA) called on US President Barack Obama “to immediately press Turkey to stop facilitating attacks on civilians in Kassab, and to investigate Turkey’s reported assistance to foreign fighters associated with US-designated terrorists groups.”

ANCA is at the forefront of a long-running campaign to get the US Congress to formally recognize the Armenian genocide. Armenia’s President Serzh Sargsyan was quick to draw parallels with 1915. Speaking in The Hague on the sidelines of the World Nuclear Summit, Sargsyan said: “All of us remember the history of Kassab very well. Unfortunately, in the course of the past centuries it has been rich in hellish realities of deportations of Armenians.”

Armenian-American celebrities like Kim Kardashian and Cher have waded in with tweets to “Save Kassab.”

Turkey denies it had any role in the fall of Kassab. In a statement on April 6, the Turkish Foreign Ministry declared that it had taken “swift measures to ensure that the people of Kassab were kept out of harm’s way.” Turkish authorities were coordinating with the Armenian Patriarchate to facilitate passage for those Armenians who wished to come to Turkey.

Some 18 Kassab Armenians have been brought over to Turkey and joined the Titizyan sisters in Vakifli, where the Turkish Red Crescent was tending to them. But Agos editor Koptas believes it’s more of a public relations exercise than a humanitarian mission. “It is clear to us that the rebel assault against Kassab was launched from Turkish soil,” Koptas told Al-Monitor, echoing eyewitness reports from the Turkish-Syrian border. “Turkey is now in an extremely difficult position and is trying to repair its image,” he said.

It’s easy to see why Turkey’s actions have triggered such controversy. The horrors of 1915 are never far from the Armenians’ collective memory. In Kassab, which overlooks Turkey, “the feelings for Turkey were not of yearning but of dislike,” recalled Nigol Bezjian, a Syrian-Armenian filmmaker who as a child spent summers in Kassab.

Turkey denies that there was a genocide, and has pumped millions of dollars into a largely unsuccessful campaign to peddle its own narrative which proposes that, swept up in the chaos of the collapsing Ottoman Empire, the Armenians mostly perished as a result of famine and disease.

Ankara’s credibility with the Armenians was further dented when it junked a set of protocols it signed with Armenia in October 2009 that were supposed to have established diplomatic ties and reopened its long-sealed land border with the former Soviet republic.

The ink on the documents had barely dried when Turkey declared that it could not implement them unless Armenia withdrew from at least some of the territories it had seized from Azerbaijan during a bitter six-year war over the disputed Nagorno-Karabakh enclave that ended in 1994. Turkey’s minister for European Union affairs, Mevlut Cavusoglu, asserted in a recent interview that Armenia had delivered “a verbal pledge to withdraw from territories under its occupation” before the protocols were signed. “But they failed to keep their promise; it is Armenia’s fault,” Cavusoglu insisted. But Western diplomats who were close to the negotiations say that Nagorno-Karabakh never came up. There is no mention of the issue in the protocols, and it is widely assumed that Turkey’s volte-face was a result of Azerbaijan’s threats to cut off vital oil and natural gas sales.

Despite the freeze in official ties between Turkey and Armenia, civil society initiatives to heal the wounds of the past are flourishing. A growing number of Turkish academics and intellectuals are rejecting the official account of what happened in 1915. A commemoration of the tragedy will be held April 24 in Istanbul’s central Taksim Square.

Now many fret that Turkish meddling in Kassab will undo such progress. Some Armenian intellectuals, in turn, worry that disinformation about Kassab may hurt the Armenian cause.

“Kassab is the heart and soul of the Syrian-Armenian community, a surviving artifact of life we had before the genocide. Losing it feels a bit like a final erasure,” explained Elyse Semerdjian, who teaches Middle East and Islamic History at Whitman College, in an interview with Al-Monitor. But Semerdjian cautions against linking the events in Kassab to 1915 “to attack Turkey’s role in the Syrian conflict as well as agitate further for Armenian genocide recognition.” She said, “Genocide recognition is a noble cause, but it should not come at the expense of Armenian credibility on human rights.”

Bezjian agrees that the Armenian community must not allow itself to be manipulated by the warring sides. “When things were good and Assad vacationed with Erdogan, all books about the Armenian genocide were confiscated from the bookstores by Syrian secret service agents,” Bezjian recalled. “Now that things have turned the other way, Assad talks about the genocide to justify his own conduct.”