The Turkish prime minister’s legislative attempts to interfere in the private lives of citizens reveal a mindset that places his will above the law. 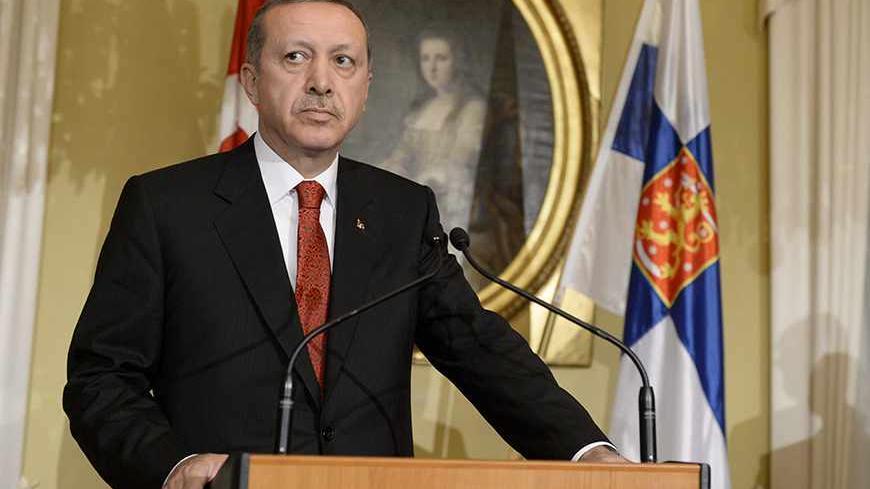 Readers of Al-Monitor's Turkey Pulse know by now that the new national agenda of Prime Minister Recep Tayyip Erdogan is taking legal measures to prevent unmarried male and female students from sharing the same house, as that contradicts his conservative-democrat views. For those who haven’t familiarized themselves with the issue, I suggest they read the articles by Yavuz Baydar and Orhan Kemal Cengiz posted on this website.

Erdogan, in a joint news conference in Helsinki on Nov. 6 with his Finnish host, Prime Minister Jyrki Katainen, was asked about the measures against mixed male-female student housing.

A reporter from the Finnish state television asked Erdogan, "In recent days, you have been accused of interfering in private lives, particularly because of your opposition to male and female students living in the same house. Why do you see this as necessary?”

Apparently rattled by hearing such a question in Helsinki, Erdogan’s first reaction was to say, “My esteemed friend must have been put up to this by someone.” And then he said, in short: "The private lives of our people are under our guarantees. There is legitimate life and illegitimate life. Naturally, we have our duties about this. Those duties are defined by law. We will take our measures as required by law."

What are we to take from the prime minister's words?

A critical look at those five sentences tells us the following: If the Republic of Turkey is a state of law, it must be accepted that the private lives of its citizens are not under the personal "guarantees" of the prime minister, but of law. Even if the prime minister had meant well when he said, "Private lives are under our guarantee," he did reveal his problematic mindset that places his will above the law.

Erdogan implicitly said that for him, male and female students sharing the same house, even if they are adults, is "illegitimate."

He considers himself duty bound not to permit a lifestyle that is illegitimate according to his ethics, and he is getting ready to prevent this so-called illegitimacy through legal means. After all, he is the one who crafts the laws which will direct him. He will direct himself, that is to say.

For a moment, some might think that the Erdogan who spoke in these terms in Helsinki could not be the same Erdogan who on Sept. 30 announced a series of legal and administrative measures bundled in a “democratization package." To the contrary — it is one and the same person, and there are no contradictions between the two.

The only contradiction is between calling the package “democratization” and today’s practices of interference that defy the current constitution of the Republic of Turkey pertaining to private live and inviolability of residence. Although there is absolutely no legal and constitutional basis to intervene with residences shared by male and female university students, on Nov. 5 Erdogan called on provincial governors to “use their initiatives."

Without skipping a beat, Huseyin Avni Cos, the mayor of Adana, stated, “Of course, the necessary work is being undertaken in line with the instructions of our esteemed prime minister. His comments were an opportunity for us to review our work.”

On Sept. 30, when Erdogan was announcing the democratization package, he mentioned and praised the concept of "respect for lifestyle.” Such a concept arising from a regulatory package labeled "democratization" should be understood as “respect for the lifestyle of everyone and every segment." That is what is natural and democratic, but not for Erdogan.

When Erdogan announced the good news that "disrespect for lifestyle" would be incorporated into the Turkish penal code as a criminal offense punishable by one to three years in prison, he referred to “religious beliefs." He added that interfering with the practice of religious beliefs will also be punished.

When saying that the scope and punishment of "hate crimes” will be expanded, he declared, “Preventing a person from practicing beliefs will be considered a hate crime and duly punished." Actually, the main and concrete benefit of the democratization package was the annulment of the headscarf ban in public. This is no doubt a positive step that appeased Erdogan's constituency.

In short, this is what the situation is: The prime minister divides the lifestyles of his citizens into “legitimate” and illegitimate" categories. For those he considers legitimate, he provides legal protections, while preparing the ground for police intervention with those he sees as illegitimate. Obviously, such an attitude is totally contradictory to concepts such as private life and the inviolability of residences as part of personal rights and freedoms adopted by modern democracies.

So what is Erdogan trying to do? He has three objectives. First, by provoking a reaction similar to the Gezi protests that began in May, he will polarize society and consolidate the conservative voters in the lead-up to the local elections in March 2014 in major cities such as Istanbul, where he may face the risk of losing. Second, he will use his extreme conservative narrative as an instrument of social pressure to impose his straitlaced notion of ethics as the norm for the entire society. Finally, Erdogan wants to criminalize non-marital relationships. There can be no other legal basis to ban male and female students from living in the same house. What is to protect from people of all age groups from being victimized if such measures are applied?

Naturally, there is one prerequisite of realizing such practices that contravene law and human rights: Erdogan has to declare himself as the “Islamist Big Brother.”