Egypt has been coordinating with the United Arab Emirates on the Suez Canal project, amid growing public outcry at the lack of transparency surrounding it. 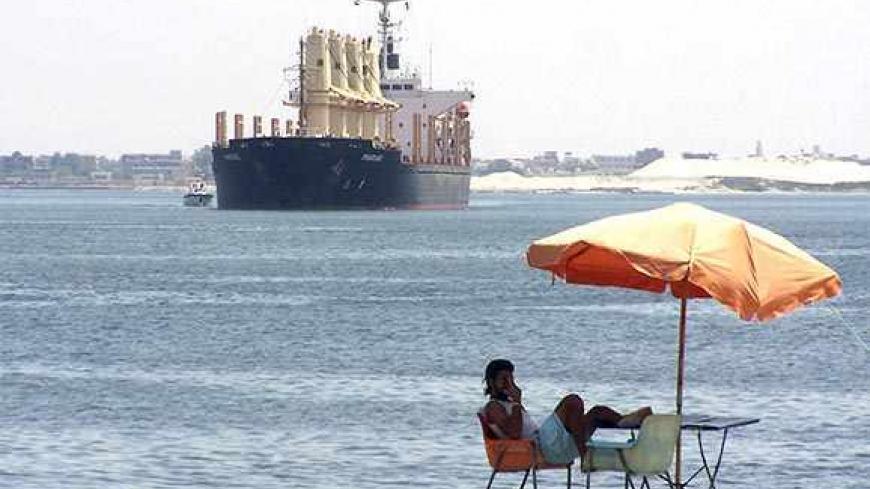 A man sits near a ship crossing the Suez Canal at the port city of Ismailia, 120 kilometers (75 miles) northeast of Cairo, June 13, 2013. - REUTERS/Stringer

CAIRO — The Egyptian government is looking to rely on United Arab Emirates' (UAE) funding and expertise in carrying out the Suez Canal development project. It needs this support to realize additional growth due to the project’s economic and strategic significance. The UAE would effectively replace Qatar, which faced popular objections amid accusations that the former government of deposed President Mohammed Morsi had sold the Suez Canal to Qatar. But protests and objections against the project have been ongoing as the government has maintained discretion in not announcing its details.

Egyptian Prime Minister Hazem el-Biblawi visited the UAE on Oct. 24 — his first foreign visit since taking leadership of the government — during which he received additional grants to the sum of $1.4 billion in addition to the $3 billion that had been granted by the UAE to Egypt after Morsi’s ouster.

“The Suez Canal project file was high among the UAE’s interests, affording it a great deal of special importance at most meetings during the visit. The government received investment offers and part of the UAE grant was put toward laying the foundation for a highways and facilities project,” a source from the government who accompanied Biblawi on this visit to the UAE told Al-Monitor.

“The government is working diligently on the project to announce its details after the media uproar about it. The discussions of the project’s technical study should be finished next week,” explained the source, who preferred to remain anonymous. “The government is trying to quickly create a draft and final vision for the project, so that it can be put up for bids from international corporations. There is no problem for any Arab or foreign parties to join in this effort, as long as there are conditions that protect Egypt's security,” he continued.

The idea behind the Suez Canal project is to build a global logistics and industrial center and for the project to take the form of a comprehensive economic zone. It includes three governorates and the cities of Port Said, Suez and Ismailia. It will provide additional services to users at lower prices and at high quality levels. Egypt expects the project to be a global center for transport. Currently, the country only collects passage fees from ships and freight carriers traveling through the Suez Canal without offering any sort of logistical or industrial services.

The Muslim Brotherhood has accused the current regime of selling the Suez Canal to the UAE. It described the latter as having the intention of taking control of the project without allowing it to be open to competition with Egypt. The Muslim Brotherhood recognized that Dubai may lose its economic clout as a trade and transit center, suspecting it of trying to control the project to guarantee that it would not affect the shipping lines in the UAE and the Jebel Ali port, which is regarded as among the most important in the Middle East. The Muslim Brotherhood, meanwhile, was facing the same accusations while it had the power of selling the project to Qatar and reverting back to a period of showing favoritism to foreign powers. Popular outrage grew toward the project because of a lack of confidence in the former regime.

The current Egyptian regime distanced itself from accusations leveled at the former regime regarding the project by changing its name from the “Suez Canal Axis” to the “Suez Canal Junctions Development” and nullifying all former proposals for it. It has not formally commented on its decision to use the UAE instead of Qatar for the project.

Political activists have called on the government via social networking sites to release the confidential details of the project and put it up for public discussion rather than continuing to hide its details. They also called on it to respond to the accusations leveled at it that it gave the canal to the UAE and tell the truth behind the UAE’s role in the project.

A security source from the Suez Canal Authority (SCA) told Al-Monitor that the authority would be setting forth standards and stipulations to protect the security aspect. “We will dispel any fears that the project will be sold to other Arab countries or foreigners. The Ministry of Justice will prepare a special law that specifies the procedures of dealing with the project and the mechanism of dealings, facilitations and privileges afforded to foreign companies to make the competition more alluring,” he explained.

“No privileges have been given to the president of the republic in the new draft law. The SCA will have the sole upper hand in acting on behalf of the project in cooperation with other institutions in the country,” the source confirmed.

“It has been agreed that the canal’s land will be put forth in this project according to bylaws and stipulations that protect the security of this vital and strategic region of Egypt. Absorbing the anger of the Egyptian street has also been taken into consideration. The sale or giving of the land to any foreign companies working on the project has been forbidden, even in the case of Gulf partners such as the UAE. Partnerships will be formed based on investments only and not on ownership of the canal’s lands,” he explained.

The Egyptian government is trying to expedite what the rates will be once the first phase of the project is implemented and hopes increased revenue will help it get out of its economic crisis and ensure a secure source of funds to help draw down the budget deficit and to help halt the decline in the nation’s global monetary reserves. This is particularly the case after the fall in tourism and investment rates because of the volatile security situation suffered by Egypt since the Jan. 25 Revolution.

“The government is expected to announce the beginning of the first stage of the project in the coming days, after the president requested that the start and rates of implementation be expedited. The involvement of partners from other Arab countries will not harm national security. They are normal partnerships that respect global standards. It is inconceivable that the Egyptian government would currently be capable of shouldering the exorbitant material costs required by the project. It is enough that the SCA alone will be taking on the funding of the basic structure to serve the industrial zone,” Minister of Investment Osama Saleh told Al-Monitor.

“The currently executable vision is to begin global bidding to build factories to repair ships, oil refining and producing petrochemical products. These companies will not be purely Egyptian but will include international companies of various nationalities. The government nearly finished reviewing the portfolio of conditions that deal with these projects,” Saleh added.

Al-Monitor received a copy of the current draft of the project being studied by the SCA. It states that foreigners shall not own land at the Suez Canal’s northern junction, including at  Port Said, Damietta, el-Arish and Ismailia or the southern junction that includes Suez and the Red Sea. The land needed for the project will be specified by the armed forces —particularly those at the northern junction, due to their connection with development in the Sinai. The call will be made for investors by the Ministry of Transport, projects will be specified and the technical and financial conditions will be laid out.

The draft includes the construction of a port town in the eastern part of the canal to attract residents to build up the Sinai and motivate youth to live there and work on the project.

“The law that deals with the Suez Canal region development project must include provisions to facilitate procedures in a way that guarantees competitiveness and attracts foreign investment. Egypt as a state taking in foreign investment must have the legal recourse that facilitates its work and does not impede it in a way that allows investors to flee,” said Taher Hazin, a legal member of the Advisory Authority to the Suez Canal project.

“The current government has not yet called for our opinion of the project or looked over the studies we have done. The main plan for the development of the Suez Canal has been available and public since 2009. However, we do not know if this is the same plan taken up by the current government. The most important change in the project must be that the regime owns the land, which is only rented. This recommendation was made by the World Bank when it was presented the project,” he added.