Bethlehem at the heart of Palestinian affairs

A flurry of diplomatic activity in Bethlehem has returned the holy city to political significance in Palestinian affairs. 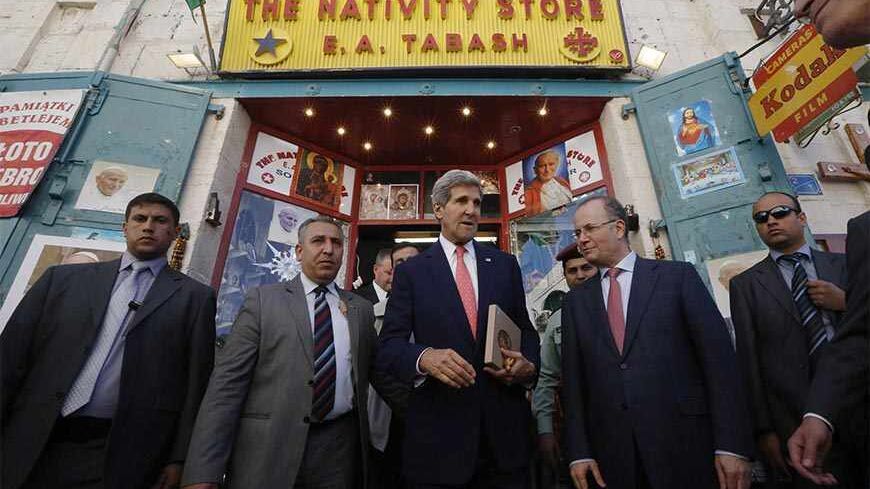 US Secretary of State John Kerry walks out after shopping for souvenirs at The Nativity Store in Manger Square, Bethlehem, Nov. 6, 2013. - REUTERS/Jason Reed

The Palestinian town of Bethlehem found itself this week in the heart of high-powered Palestinian political discussions and debates. Residents of the city where Christianity began felt the change that included a five-day stay in town by Palestinian President Mahmoud Abbas, a visit of Polish President Bronislaw Komorowski (Nov. 5) and meetings with US Secretary of State John Kerry (Nov. 6).

Security arrangements in Bethlehem were at their  highest level as Palestinian police forces were spread all over the city; certain sections of the city were completely out of reach for residents, and the Church of Nativity — where Christians believe Jesus was born — was a mix of regulating both the visit of ordinary tourists as well as political visitors.

Bethlehem has quickly jumped in terms of importance because of the rise in its tourism income. The city has built new hotels that offer rates much lower than those in nearby Jerusalem, thus attracting many tourists who are eating, shopping and for the first time staying overnight in the Palestinian town. Naturally, the bulk of tourism income is still clearly on the Israeli side, but the growth of the city’s hotel business is evident in the number of tourist buses that are seen crossing in and out of Bethlehem daily.

Palestinian tourism has yet to adapt to the sudden influx of overnight tourists. Few attractions have been organized to give tourists opportunities to learn more about life, culture and, most important, the political aspirations of Palestinians. Some organizations have started alternative tours and offer tourists the opportunity to stay overnight with a Palestinian family; still, these alternative tourism programs are still barely making a dent in the multibillion-dollar business which Israel has the lion’s share of.

While tourists normally cross the Israeli military-run checkpoints between Bethlehem and Jerusalem, they are immune from the much more rigorous and demeaning actions of local Palestinians lucky enough to get a permit to even reach the checkpoint. Israeli checkpoints rarely stop or check passengers on tourist buses.

In addition to the need for Palestinians to create cultural and tourist activities for those staying in Bethlehem overnight, the issue of tour guides is still an unresolved problem. Israel maintains an advantage over Palestinians in this area. Not only is the travel issue for Palestinians in the control of Israelis, but the coveted guide license is practically a "state secret" in which the Israelis hold the power on whom to give and not give it to. During the second intifada, Palestinian militants tried to restrict Israeli guides from entering Bethlehem, but this issue was partially resolved. While Israeli tour guides can now enter, Israelis have yet to provide equal treatment to Palestinian guides.

By being able to exhibit a Palestinian city as a well-run and properly regulated tourist city, Palestinians have the option to build up credit toward managing the more politically charged areas such as being involved in finding a permanent solution to visits and prayers at the Ibrahimi Mosque compound in Hebron — which is holy to Jews, Muslims and Christians. An even more ambitious goal will be the management, in Jerusalem, of the Al-Aqsa Mosque compound, which Jews call the Temple Mount and has major political and religious significance.

In addition to the tourist and religious importance of Bethlehem, the city has also become a center of sorts for the West Bank’s southern district. While Hebron is the capital of the south, Abbas and Palestinian officials are much more comfortable and secure in Bethlehem as a result of its liberal lifestyle and easiness to secure. Of course, for Palestinian officials and the ordinary citizen to travel from Ramallah in the north to Bethlehem in the south, they cannot take the easy route through Jerusalem and must use the alternative Wadi al-Nar mountainous road.

Bethlehem has become an important part of the new Palestinian history. This week, the numerous activities in the city have shown how important it is for Palestine and its future.