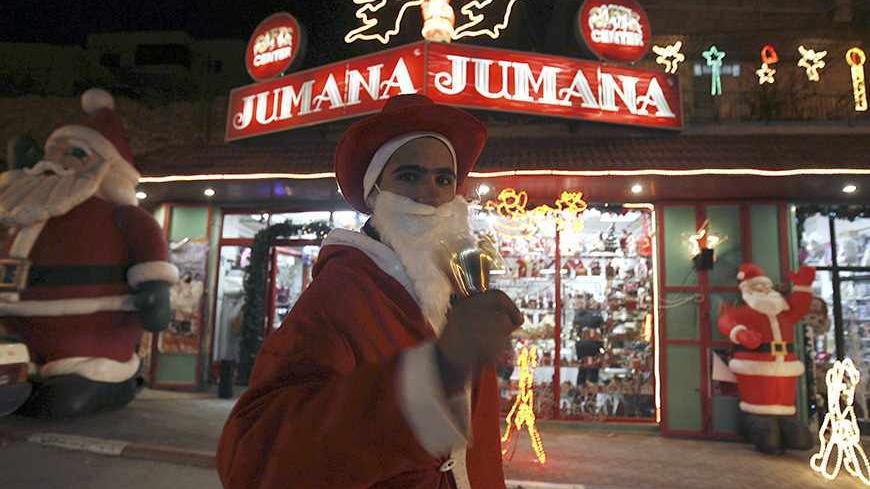 A Palestinian man dressed as Santa Claus rings a bell as he stands outside a shop in Bethlehem, the West Bank, Dec. 23, 2007. - REUTERS/Ammar Awad

As the Christmas season approaches and as tourism to the Holy Land rises, the fight over holy sites has also escalated. The Palestinian Ministry of Information published on its website a report citing an official complaint by the Palestinian ambassador in Rome, Mai al-Kalia, against Israel, which is trying to appropriate Bethlehem.

According to the Palestinian ministry, the Israeli tourism office in Rome has published touristic literature stating that “Israel, thanks to a wide range of unique sites such as the old port of Jaffa, and Nazareth, Jerusalem and Tiberias, Bethlehem, Capernaum, Masada, the Dead Sea, Fort Herod and caves near Qumran …” Four of the sites mentioned lie in the Palestinian territories, but Israel is advertising them as part of Israel in an attempt to attract Christian pilgrims from Italy.

The Palestinian diplomat, according to the report, will file an official complaint to the Italian Foreign Ministry accusing the Israeli tourism office of publishing “false information.”

Palestinian efforts in Italy have been matched by a popular movement in Bethlehem itself. Young Palestinians holding signs in different languages protested outside the Church of the Nativity in Bethlehem on Nov. 28. Their message was simple: Bethlehem is a Palestinian town.

The diplomatic and public activity was also echoed in a powerful message penned by the city’s first female mayor, Vera Baboun, and addressed to US Secretary of State John Kerry during his visit earlier this month. While specifying how the region could benefit from tourism, Baboun rejects any exclusively economic solutions without serious efforts to end the Israeli occupation of Palestine. She said, “No true economic development is possible as long as Israel continues its occupation of our country. As the World Bank confirmed a few weeks ago, we continue to lose billions of dollars because of the Israeli occupation.”

Israeli officials have stated that tourism to the Holy Land has experienced a recent boom. Between January and June 2013, the number of tourists who arrived in Israel reached 1.7 million, many of them making the short trip to the Palestinian town of Bethlehem.

The Israeli checkpoint between Jerusalem and Bethlehem continues to operate, but the Israelis have relaxed measures for tourists, announcing on its website that tourists can easily pass the checkpoint. The official Israeli tourism site states in its frequently asked questions section, “Crossing from Jerusalem to Bethlehem is direct, easy and no prior authorization is required. Hundreds of tourists make the crossing in both directions every day.”

Palestinians do not receive the same privilege as visiting tourists. They are not allowed free movement in and out of their own city, but must obtain a travel pass to cross the same checkpoint that tourists are waved through without any delay.

The jewel in Bethlehem's crown is the Church of the Nativity built by Queen Helena, the mother of the Roman Emperor Constantine in 327. The church is being renovated after years of neglect and deterioration. With the state of Palestine being admitted to UNESCO and the international organization recognizing the Church of the Nativity as a protected heritage site, joint work on the restoration effort became possible. The Palestinian government has contributed $2.6 million toward the project. An Italian company, Piacente Spa, has been entrusted with supervising the restoration efforts.

While Palestinian diplomatic and public efforts have focused on Israeli attempts to misrepresent Bethlehem, the announcement by the Israeli tourism office in Italy also names other sites that are clearly part of Palestine. The location of the Herodian castle and the Qumran caves are part of the West Bank. These locations constitute what Palestinians hope will become their independent state as part of the universally accepted two-state solution.

Tourism and politics often collide, and recent efforts by officials and the general public clearly show that the Palestinians will stand up to Israeli efforts to appropriate tourist and pilgrimage sites, even if it occupies these locations.