An alternative tourism market, which offers tourists a chance to join Palestinians in an olive harvest or tour a refugee camp, has developed in Israel, so that tourists can experience the complex reality of this land. 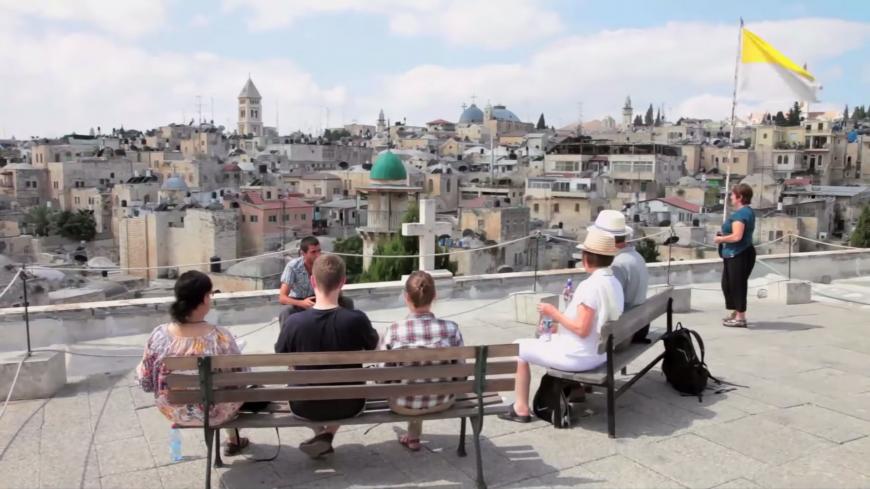 Tourists listen to a guide during a tour run by Green Olive Tours that covers culture and politics as well as history, Jerusalem's Old City, seen in a still from a video uploaded April 5, 2012. - YouTube/Green Olive

Enjoying a Sabbath meal at a West Bank settlement, meeting Palestinian artists in Ramallah, popping over to Israel’s border to see the Gaza Strip from there — a growing number of tourists is interested in seeing more than just the regular tourist sites and attractions of the Holy Land. They want to hear about the people living here, Jews and Palestinians alike, and learn about the Palestinian-Israeli conflict from up close. These aren’t study groups that come to Israel and the West Bank with some specific educational objective. They are “ordinary” tourists, who are taking a break from their busy lives, and paying good money to boot, just to experience the complex realities of this land for themselves. What they find is light-years away from any glittery ad campaign.

It is not just educational or political groups such as anti-occupation group Breaking the Silence that now offer alternative tours of contested areas such as Hebron. Various companies offer fascinating tours of Israel, the West Bank, and the Palestinian territories, bringing tourists to places that few Israelis have actually seen. For example, Green Olive Tours offers tourists a chance to participate in the olive harvest with Palestinians, visit the old city in Nablus and see street artist Banksy’s work in Ramallah as part of their daily tours. In contrast, Mejdi Tours takes tour groups to visit Jewish settlements and Palestinian villages, and offers a rich cultural program that focuses, among other things, on the works of Israeli poet Yehuda Amichai and Palestinian poet Mahmoud Darwish.

Aziz Abu Sara, a Palestinian from East Jerusalem who founded Mejdi Tours 10 years ago, told Al-Monitor that this market of “more responsible and engaged tourism” is part of a growing international phenomenon. “Tourists want to see more than just the required sites. They also want to learn about real life in the places they visit,” he said. “It is impossible to understand the challenges of the people living here without talking to them and getting to know them. There used to be no companies that offered things like that. We were the first company to offer tours based on the two narratives. Our groups always have a Palestinian guide and an Israeli guide. People laughed at us at first and said that no one would come. But then we started to work with an large variety of groups, ranging from educational groups to tourists looking for exclusive tours. What they all had in common was a desire to understand what is really happening in Israel and [Palestine]. They wanted to learn about the impact of globalization and to connect with the situation on the ground locally.”

Abu Sara noted that at first, there were few groups that came to hear both narratives and participate in a different kind of tour — one that was completely out of the box. Over the past decade, however, Israel has launched three military operations in the Gaza Strip — Operation Cast Lead in 2008, Operation Pillar of Defense in 2012 and Operation Protective Edge in 2014 — and negotiations between Israel and the Palestinians have entered into a state of deep freeze. Because of this, he explained, many tourists do not want to make do with the usual visits to Jerusalem, Nazareth and Tel Aviv. They are interested in the locals, each of whom has a unique story. He added that hundreds of groups have taken part in these alternative tours in the past year alone.

Fred Schlomka, CEO of Green Olive Tours, was born in Scotland to parents with Palestinian roots. He told Al-Monitor that a growing number of tourists join alternative tours because there has been a significant increase in the number of tourists to Israel in general. He said that most tourists who visit Israel, also visit the Palestinian territories.

The Ministry of Tourism believes that Israel will break another record in 2019 by hosting about 5 million tourists. About half of them are independent tourists, who do not come to Israel on a package tour. Green Olive Tours offers visits to refugee camps in Ramallah and Bethlehem, and home hospitality with Israeli and Palestinian families. “We also have tourists who volunteer in refugee camps or in schools in Palestinian Authority areas,” Schlomka said. Abu Sara’s Mejdi Tours goes beyond Israel and Palestine by offering a wide variety of tours to regions of conflict, ranging from Iraqi Kurdistan to Ukraine.

In answer to the question whether they believe tourists get a different perspective as a result of these tours, Schlomka said, “That is certainly our goal. We want these tourists to go home as ambassadors of a just peace in this land. Nothing makes me happier than getting emails from visitors who tell me that when they returned home, they joined a group interested in promoting peace, or that they approached their member of Congress and asked exactly what he or she is doing to advance this objective.”

According to Abu Sara, there are precise figures about how these tours impact their guests. “A young doctoral student examined the impact of the tours we offer. When she interviewed tourists about one year after their trip, 83% of them told her that [following their trip] they had developed more compassion for the other side. In other words, those who arrived with pro-Israel leanings felt more compassion for the Palestinians, while those who were pro-Palestinian felt more compassion for the Israeli side. For us that means that we achieved our objective. We are different from other groups that offer political tours. Unlike them, we work very hard not to turn the experience into propaganda. We don’t do that. Our goal is to enrich the information for the tourists, so that they hear both sides and feel more compassion,” he said.

The reviews on TripAdvisor of Mejdi Tours and Green Olive Tours include several moving testimonies about experiences that changed these tourists’ perspectives on what happens in the region.

Since there is a global trend of more attentive tourism, it would be safe to assume that many more tourists who want to visit places off the beaten track will be arriving here in the next few years. They will want to get to know Israelis and Palestinians, and will end up going home with new insights. Encouraged as it is by this rise in tourist numbers, Israel should prepare for a new kind of tourism — visitors who are much more aware but also more critical.