Who decides how to rank Arab women? 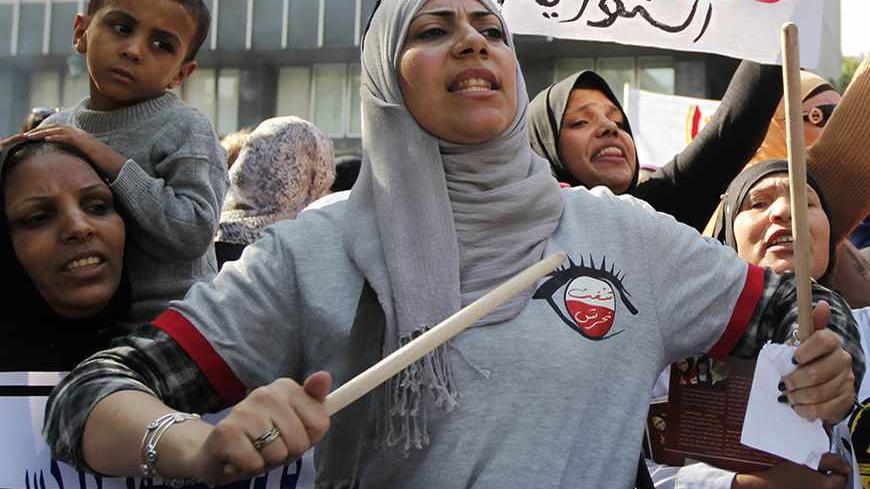 Women shout slogans against the government and members of the Muslim Brotherhood and Salafists during a protest against the absence of a women parliamentary quota in the constitution and to demand more women rights in front of the Shura Council in Cairo, Nov. 13, 2013. - REUTERS/Mohamed Abd El-Ghany

It took Western media a few weeks after the toppling of Egyptian President Hosni Mubarak to bring up the question of women’s rights in relation to the Arab revolutions. The question is certainly not innocent considering the deployment of women’s issues in war propaganda and the presumed image of Arabs as incapable of intellectual revolutions that can bring about values of equality and freedom, presuming these values exist elsewhere.

The recent poll by the Thomson Reuters Foundation does not diverge from this discourse. On social media, women and men have been debating the methodology and outcomes of the poll. Although the status of Arab women did not witness any significant developments, a critique to this report is necessary to highlight how problematic these polls are, particularly when measured on “human rights.”

The report claims to have relied on the answers of "336 gender experts." The criteria of selecting these “experts” are not known and the names of those involved are not disclosed. I was myself contacted to take part of the poll, but did not find the questions of any use as they relied on one understanding of a good status for women and expressed interest in one type of woman for the poll.

I did not find stateless and migrant women in Kuwait of importance to the poll, just as issues of a cultural and religious nature were of more importance than institutional ones. Hence, Kuwait is ranked the third best after Comoros and Oman, perhaps due to the lack of information and participants in the poll, and not necessarily for factual reasons.

On his blog, Asad Abu Khalil published an email sent from the Thomson Reuters Foundation to a colleague of his, which was similar to the email I received. The colleague was asked to answer the short questionnaire and forward it to others to participate. This places the methodology in doubt as there were no clear criteria for the selection of participants and the questionnaire was open to any willing participant. It should be deemed more of a public poll than one conducted by “experts.”

The poll’s most controversial outcome was to state that Egyptian women hold the worst status of all Arab women based on sexual violence and female genital mutilation. The title was staggering, not because Egyptian women necessarily enjoy a comfortable status, but because ranking women on such selective aspects is problematic. The poll showed, by contrast, that Saudi women were only better off than women in Egypt and Iraq because their country is “making token advances on women’s rights.” Not only does this statement soften the kind of institutional and daily sexism that Saudi women face, but it simplistically implies that women’s driving is the main concern of Saudi women as opposed to rampant discrimination in employment, male-guardianship and divorce rights.

Like many other reports, this poll mentions a report by the United Nations Entity for Gender Equality and the Empowerment of Women (UN Women) that states 99.3% of Egyptian women have been sexually harassed. The UN report, which does not state the number of respondents surveyed, is subverted in this context to make forms of sexual violence in other Arab countries less relevant and less important. In comparison to Syria, ranked fourth worst in this poll, Egypt is not a conflict zone in which women are sold into rescue-marriages, kidnapped from refugee camps, raped, tortured and killed. Here is the problem with such polls: creating an absurd competition for what is worse, while in the background Western women are imagined as enjoying flawless rights, despite sexual violence still being a regular occurrence in Western societies.

A Reuters report explaining the poll’s outcomes mentions polygamy as a “widespread” practice in Tunisia, making it an issue with which women are struggling. Tunisians commenting online ridicule this statement since polygamy is not permitted in their state. This particular point reflects how images of Arab women by the Western eye are constructed on presumptions. It also shows how comfortable Western establishments, and Western feminists, are listing polygamy among practices demeaning to women when their monogamous, heteronormative marriages are never mentioned in their "gender gap" reports.

This poll is nothing more than an example of how the West — with its political leaderships, United Nations establishments, nongovernmental organizations, media outlets and mainstream feminists — imagines Arab women to be. Not only are we supposed to fit the "ruler" that measures and evaluates our lives and struggles, but we are also supposed to accept rankings that prioritize certain issues over others. Once again, gender issues in the Arab world from the Western perspective are located in the domain of culture and tradition instead of institutional and patriarchal oppressions that are aided by colonial and neocolonial legacies.