Does Israel's police have a problem with women?

In an interview with Al-Monitor, Erella Shadmi, an academic researcher and retired policewoman, says she was unsurprised by revelations of sexual harassment within the police: ''This phenomenon has been well known for more than 20 years.'' 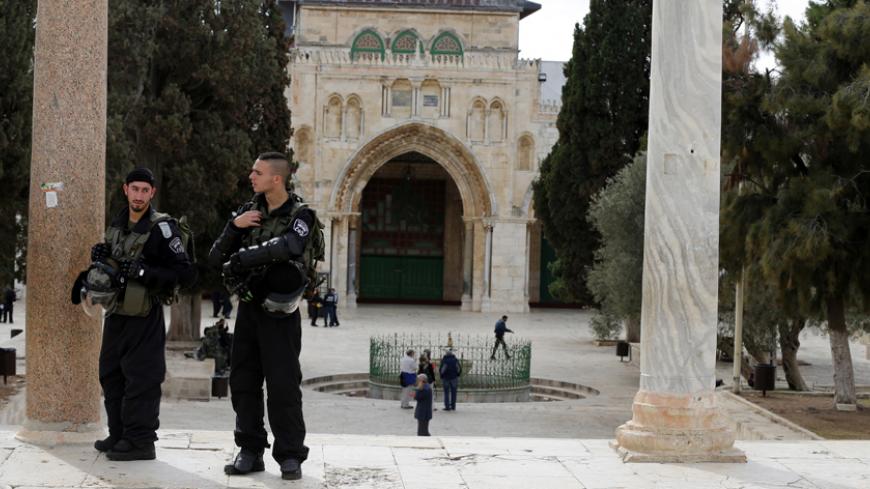 Israeli police stand guard on the compound known to Muslims as Haram al-Sharif and to Jews as Temple Mount in Jerusalem's Old City, Nov. 5, 2014. - REUTERS/Ammar Awad

Erella Shadmi has been studying the complex relationship among the police, society and women for more than 40 years. She spent the first 20 years of her career as an officer in the Israeli police, and the next 20 years as a sociologist, an activist and a leading feminist researcher. Shadmi dedicated her doctoral dissertation to public oversight of the police in a free society — the first dissertation about the police to be written in Israel.

A Tel Aviv native, Shadmi participated in leftist protests while still in high school. As a student of communications she joined the police, and was the first woman in the command and headquarters course. Among her many posts there, she also served as police head of the human resources planning division, and established the newsletter of Israeli policemen titled Sights of the Police.

She is among the founders of the Kol Haisha (A Woman's Voice) organization, active in the feminist peace movement Women in Black, a member of the feminist Mizrahi organization Achoti (My Sister) and made her living as the chairwoman of the Women’s and Gender Studies Program at Beit Berl College.

As a string of episodes of sexual harassment and improper, even criminal behavior by senior police officers has been exposed in recent days, let's hear Shadmi's opinion about this organization.

Al-Monitor:  What encouraged you to join the police?

Shadmi:  It was never my deep desire to join the police. When I joined its ranks in 1970, I was already a critical peace activist and I saw the police as an oppressive organization. I had to start working there because I had no other job offers in Jerusalem at the time. Although my outsider status stood out, I was sucked into the police. It was a fascinating workplace: the diverse men and handful of women who worked there along with the complexity of the organization and the dilemmas that it faced, made it very interesting for me. I was especially drawn to the familial atmosphere of the organization, which sometimes translated to flirtation, relationships and all too often undesired sexual harassment.

Al-Monitor:  In the 20 years you worked in the police, you built an impressive career. Do you feel that you were able to create change?

Shadmi:  I was creative and was awarded with ranks and challenging posts. I was aware of the men around me but I enjoyed being the respected young woman, usually the only woman. I became committed, responsible and loyal. I worked closely with two chiefs of police — [Shaul] Rosolio and [Herzl] Shafir — and I was deeply impressed by their openness and their equal treatment of women. I was especially impressed by their aspiration for a revolution in police work. However, after 20 years I chose to leave. A moment before my free spirit was defeated, before I lost my critical outlook and internalized the aggression, competitiveness and authoritarianism of police work — I got wise. I spent some time in the United States, saw some changes in my family life and was embraced by feminists, which all gave me back my freedom. I once again became the free woman I always was: critical, feminist, peace seeking, political. The day after I retired from the police I showed up at a Women in Black demonstration [against Israeli occupation] and gave myself to the struggle for peace and feminist action for a better world. I taught in the academy and became a critical researcher of the police and policing. Since then I haven’t spared the police my criticism toward it, which has been reflected in newspaper columns, academic conferences, television, but especially in my book "Secured State."

Al-Monitor:  After years in the police and years of researching the police, what do you think are its main misconceptions regarding women, and how have you dealt with these mistaken ways of thinking?

Shadmi:  I survived the police, but I saw many weak men there who paid a heavy price and gave in to the violent culture to win authority, prestige and upward [social] mobility. This is the steamroller of the hegemonic masculine institutional culture of the police. It was cemented through years of an exclusively male institution, through an ethos of force and authority, aggression and control, normative and permitted violence, defense of the state instead of citizens, the exclusion of women and femininity, of encountering the other, especially the Palestinian and sometimes the Jewish Arab, only through the gun and the nightstick.

Al-Monitor:  What impact does an internal organizational culture such as you describe have on the conduct of the police in society?

Shadmi:  When masculinity is institutionalized in this way, you can only expect a police force that serves hegemony. Of course, you can’t expect a real and honest fight from the police against men’s violence toward women or trafficking in women or the integration of women in all aspects of police work. So, for instance, Israeli police has refrained until today with dealing with trafficking in women for purposes of prostitution as it has refrained for years from dealing with the phenomenon of women who are abused by their partners, even though it was well aware of this terrible violence. I wasn’t surprised that a long line of very senior officers is suspected of sexual harassment. This phenomenon was exposed 15 years ago in all its gravity and its treatment has been held up. As early as 1998, Israel’s police committed itself to work to advance and integrate women, but for years it did so sluggishly — even though women have proven their ability as investigative officers and station commanders.

Al-Monitor:  How do you explain this ongoing immanent failure? And what do you think can be done to change women’s status in society in general and the police in particular?

Shadmi:  We must remember that the police is not the army, but a civil service to defend and help the state’s residents. Therefore, it’s not just that women can serve in any role and their presence in the organization is invaluably important, there’s a need for structural and essential change — we should overthrow the militaristic and combative approach that’s prevalent in the police — including the minimum requirement that recruits have “combat experience” for the majority of positions. The police force marks the boundaries of social legitimacy of men’s violence toward women, within the organization and outside of it, as it marks the boundaries between the majority and minority, hegemony and the margins, control and oppression. We saw this, for example, in October 2000, when police bullets killed 13 Palestinians, or in the continuing neglect in dealing with the murder of women in Juarish [a neighborhood in Ramle].

Al-Monitor:  You present a very troubling picture. Is there an opening for change? Do you feel that it’s your role to cry out in the name of women? In the name of society?

Shadmi:  In light of the police’s disdain for dialogue with the public, the refusal of the political system to intervene in a real way in the organization’s practice, the failure of civil society to develop mechanisms for police transparency and responsibility, and the silence of the vast majority of the academy — I don’t see real change in the police on the horizon. Add to that the growing political power of the police in Israel (today the minister of public security and four Knesset members are retired police commanders). Unfortunately, after long years of service in the police, research and teaching about the police and policing and activism to fight failures and violence in police work, I feel defeated. But as a feminist, I can’t allow myself to be silent. I will continue to work politically for a professional, fair and equal police force, just as I’ll continue to work for peace, for Jewish-Arabs and for disadvantaged women.