Tunisia has served as a regional example for Arab women in politics, but the Arab world still falls behind in global studies and much work remains to be done. 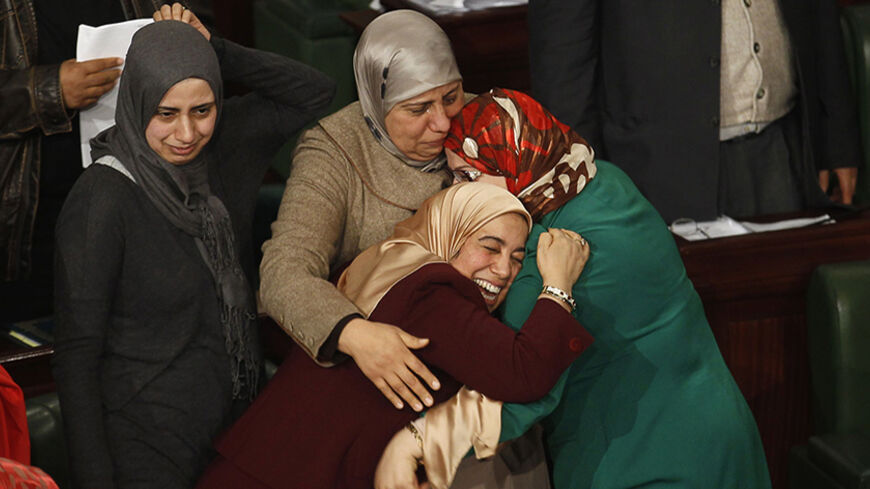 Members of the Tunisian parliament celebrate after approving the country's new constitution in the assembly building in Tunis, Jan. 26, 2014. - REUTERS/Zoubeir Souissi

Arab women are increasingly present in public life, contrary to widespread misconceptions about the region. This is at least what Youssef Courbage, research director at the French National Institute for Demographic Studies (INED), contends. The combined effects of delayed marriages, high enrollment rates in universities, access to contraception and decreased fertility (i.e., the number of children per women) has led to the emergence of women from the family sphere and entry into the labor market and politics.

In an interview with Al-Monitor, Courbage dated this evolution to the early 1970s. He cited Morocco as a case in point, where the percentage of single women in the 30-34 age bracket has soared from 5% in the late 1960s to 33% today. Likewise, traditional marriages that often involve marrying into a clan or tribe continue to plummet, from 30% in 1995 to 15% today. Female political participation is best exemplified in Tunisia, where women represent more than 31% of members of parliament, up from 28% in 2011. By way of comparison, a mere 18% of national legislature seats are held by women in the United States and 27% in France.

According to preliminary results of the Oct. 26 parliamentary election, Tunisia’s parliament boasts 68 female members of parliament, of which 35 hail from the liberal, secular party Nidaa Tunis and 27 from the moderate Islamist party Ennahda. Tunisia is reaping the fruits of a progressive electoral code, which was revised in the wake of the Arab Spring.

“We fought to have male-female parity in the 2011 electoral law,” Faiza Skandrani, who heads Tunisia’s organization for equality and parity (Association pour l’Egalité et la Parité), told Al-Monitor. She remembered that surprisingly enough Islamists from Ennahda were sometimes more in favor of gender parity than democratic parties. Skandrani said the main challenge back in 2011 was to convince political parties that there were indeed apt female politicians. “Often at time, men in political parties said they wouldn’t be able to find suitable female candidates. So we traveled the country and collected the resumes of perfectly able women to prove them wrong.” Her organization also trained female candidates in political communications and lobbying.

Some 5,000 women ran in the 2011 election and almost as many ran in 2014. Yet, Skandrani said she regretted that gender parity only applied to the lists of candidates — meaning that each party should present 50% of women candidates — and not to the heads of the lists. Article 23 of the Tunisian electoral law requires only one-third of women as heads of the lists. “Considering the advanced status of Tunisian women historically and the 2014 constitution, which provides for equal rights, women could have done much better in the last election if integral parity had been ensured in the electoral law.” She said it would be her organization’s next battle for the coming 2015 municipal elections, when an updated electoral code will be enforced. The existing partial parity rule will apply to the upcoming November presidential election, in which a female candidate is running.

Tunisia stands as one of the rare exceptions for female political participation in the Arab world. According to a report published annually by the World Economic Forum (WEF), most Arab countries fare poorly on gender parity. WEF's Global Gender Gap Report uses four criteria to assess the parity gap between men and women: economic participation and opportunity, educational attainment, health and survival and political empowerment. Not a single Arab country ranked above 113th place, out of 142 surveyed in the 2014 edition. Kuwait had the best ranking at 113th, followed by the United Arab Emirates (115th) and Qatar (116th). Tunisia ranked 123rd, with its lowest score for economic participation (130th) and its best ranking for political empowerment (82nd). In comparison, Kuwait ranked 137th for the latter criteria, Morocco 98th and Egypt 134th.

But Courbage, a French-Lebanese national, had an explanation: Progress takes time. “The poor performance of Arab countries in the WEF report doesn’t mean they haven’t improved over time. They have, but in parallel with other countries, and that is why Arab countries are still close to the bottom,” he also said. He cited illiteracy rates in the Arab world: “Illiteracy in the 1960s reached 80% of the Arab population compared to 20% today, but considering that it was probably 0% in Sweden all along, Arab countries still rank poorly.”

The WEF report measures the economic participation of women as a factor of gender parity. This criterion does not necessarily make sense in Gulf countries where female university enrollment exceeds male enrollment, but where women “aren’t obliged to work as they can easily and happily live on their husband’s salary," said Courbage. However, change in the status of women is in the making even in conservative Gulf countries. “Look at Saudi Arabia where the fertility rate has dramatically decreased in the past 40 years, with 3.3 children per woman.”

Arab women’s economic participation and their share in the overall labor force only partially reflects the reluctance of male-dominated societies, Courbage argued. Many low-income and middle-income Arab countries such as Morocco, Tunisia and Egypt have been deeply affected by the 2008 downturn of the global economy and consequently hit by higher unemployment rates. Arab women are historically more vulnerable to economic crises as they hold less secure jobs or jobs in the informal sector.

The upsurge in Islamist politics, whether it be in Morocco with the ruling Parti de la Justice et du Développement (PJD), Tunisia with Ennahda or Egypt with the Muslim Brotherhood, has also set women back a few decades. “But this is all temporary,” said Courbage. “Deep transformations are underway such as the demographic transition and one should not forget that it took Europe a century and half from the industrial revolution to truly empower women.”

The International Labor Organization (ILO) says that decreasing fertility rates, increasing life expectancy and therefore an increasing working-age population will require the recruitment of more women into the workforce. ILO forecasts an increase of at least 50% in the Arab female participation rate by 2050, down from 26% — one of the lowest rates of female economic participation in the world, relative to a global average of 56%.

The status of Arab women is evolving but it will require the commitment of governments, rights organizations and women alongside men to speed up the pace and make sure that economic participation and higher school enrollment rates also translate into political empowerment.