Yehouda Shenhav, author of Beyond the Two-State Solution, advocates one comprehensive space, for Israelis and Palestinians. 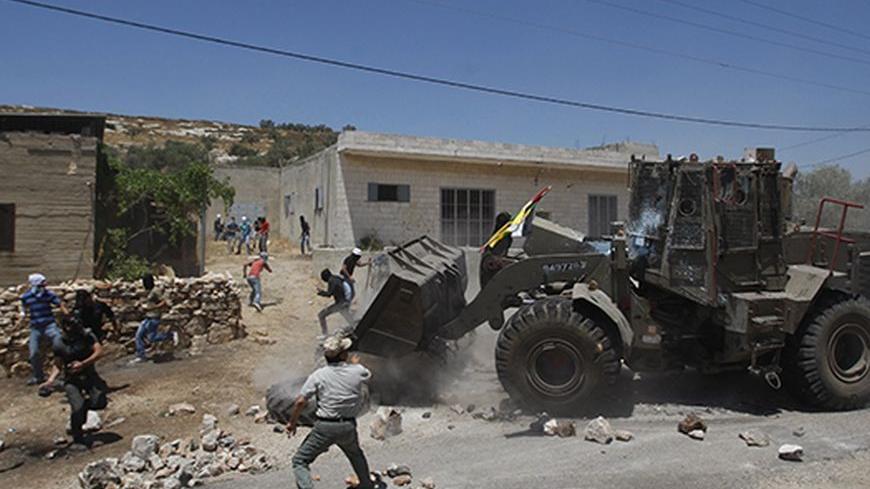 Palestinian protesters run away as an Israeli military bulldozer clears a roadblock placed by the protesters during clashes at a demonstration against the nearby Jewish settlement of Kedumim, in the West Bank village of Kfar Kadum, near Nablus, June 8, 2012. - REUTERS/Mohamad Torokman

For many years, sociologist Yehouda Shenhav has rejected the two-state solution that became, in his eyes, the only paradigm of the Israeli left. As far as he is concerned, this is a violent, inapplicable solution that only promotes the next war.

Paradoxically, Shenhav — regarded as belonging to the radical left — has become an isolated, aberrant phenomenon in his camp. He is viewed as a figure who harms the group’s efforts when he brandishes the one-space solution.

But now Shenhav feels that things are changing; that more and more people, including right-wingers and Palestinians, are beginning to distance themselves from the worn-out two-state solution that Shenhav is sure will never be realized.

One of the experiences that strengthened his feelings on the matter is the Sept. 15 debate in which he participated vis-à-vis Jewish-American journalist Peter Beinart, considered the strongest spokesman of the Israeli left in the United States. The event was sponsored by the Institute for Israel and Jewish Studies at Columbia University, following the publication of the English version of Shenhav’s book, Beyond the Two-State Solution.

Shenhav returned to Israel with the feeling that the lure of the two-state solution as presented by Beinart has expired. In an interview with Al-Monitor, Shenhav advises us not to raise our expectations regarding the diplomatic negotiations led by Justice Minister and chief negotiator Tzipi Livni, and explains why the only possible solution is the one-space solution, and that we will all come to this understanding eventually.

Professor Shenhav, from where do you get the idea that the two-state solution is no longer relevant? At this very moment, diplomatic negotiations are being held along these very guidelines.

''New winds are blowing now and people are beginning to understand that the two-state solution is not possible. Around the same time as my debate with Beinart, an article appeared in The New York Times by Ian Lustick on Sept. 14, one of the great experts regarding the conflict, under the title “Two-State Illusion.” And Lustick believed in the two-state concept.

"People come and tell me, 'We ridiculed you five and 10 years ago, and now we are beginning to understand that we have no choice.' On what are they basing this ‘no choice’ idea? We are all aware of the power of the settlers and that evacuating half a million settlers is an illusion. Even if we assume, like Akiva Eldar, that only 150,000 would have to be evacuated, that is also a dangerous illusion. The settlers are a power group in politics, in the army and the Israel Land Administration, they are too strong.''

That is the only reason?

''No, not the only reason. I also argue that partitioning the land is immoral. It is immoral to remove a person from his house, whether a Jew or an Arab. I say this contrary to my political positions, as I do not support the settlers, but I argue that it is not right to evict them from their houses. It is an anti-moral step. It is a transfer, expulsion — which is a word used by the right wing, but I agree with it.

''I also argue that from the Jewish point of view, it would be a giant mistake to partition the country. I think that this illusion, that Jews and Arabs can be separated, is erroneous. Severance is a violent act for Jews and non-Jews alike.

''Even more than that, I think that we are missing the point about the key problem of the two-state solution. In my opinion, the ones who will suffer the most are the Palestinian Israelis. People will tell them: You don’t want to bear arms or to swear allegiance [to the state of Israel]? So go to your own state. Pressure will start for the transfer of Palestinian Israelis.''

This is a very sweeping statement. After all, the leaders of both sides and the US president are taking action to realize the two-state solution.

''It will never actually happen because it is clear to everyone that Israelis approach the conflict with the '67 paradigm in their heads; in other words, if we return what we conquered in '67, then everything will be OK. I claim that the Palestinians don’t think this way. They think about '48. As far as they are concerned, that war never ended, and there are 6 million people waiting to hear something new. The Palestinian leadership cannot betray them, and justifiably so.

''The one who was first to recognize this was, ironically, [former Prime Minister] Ehud Barak. In an interview with Ha’aretz, eight years after the Camp David failure, Barak said that he came toward [former Palestinian Authority Chairman Yasser] Arafat to solve the '67 problem; but he — Arafat — came to solve the '48 problem. That is why [Palestinian President] Abu Mazen didn’t accept [former Prime Minister Ehud] Olmert’s offer, and why he will not accept Tzipi Livni’s offer. And therefore there won’t be two states for two nations.''

High-placed officials in the Israeli political system who met with Abu Mazen in the last two years, including Knesset member Tzachi Hanegbi, received the impression that Abu Mazen is ‘into’ the two-state idea.

''Abu Mazen cannot. He has no support anymore.''

Is he "irrelevant," as former Foreign Minister Avigdor Liberman says?

''Obviously. I agree with Liberman on 90% of his observations. But not regarding the solutions. The Israeli Arabs are the very heart of the conflict, that’s why there can’t be two states when the center of the conflict will remain in the Jewish state. It is so very clear to me, and not only to me.''

''You hear the voices on the right. [Past and present Knesset Members] Moshe Arens, Ruby Rivlin, Tzipi Hotovely, [Defense Minister] Moshe Ya’alon, Avigdor Liberman, who say that the conflict is not solvable. This week [Deputy Foreign Minister] Zeev Elkin said that we need to manage the conflict, not solve it. And I agree with their diagnosis.''

They say that because they don’t want to concede parts of the country.

''True. But their diagnosis is that the negotiations won’t bear fruit because the Arabs have not conceded ’48. We have here completely different views regarding the origins of the conflict and how to solve it, which includes the dangerous illusion of the left that the settlers can be evacuated.''

But settlers were evacuated in the disengagement [from the Gaza Strip in 2005].

And on the other side?

''The Palestinian youths in the West Bank are already talking about one space. This understanding is growing even within the Jewish public. In the regular, liberal left there is a process of erosion. And here we get to the key point. We think that we have two options: a two-state solution or a binational solution. This is a well-known sociological trick of deception, because there never are only two alternatives. Between the two paradigms — of “a nation of all its citizens” and “two states” — are many more options. People refuse to see this.''

What are the other options?

''I am not an engineer or politician who can determine how to go. But I know that from a moral point of view it is a mistake not to consider other options. We are stuck with the ‘two-state solution,’ which is a very violent solution; and on the other hand, there is the ‘state of all its citizens’ option, in which we will all drown in an Arab ocean and they will eliminate us. But in between, there are a trillion other options.

''We need to abandon the concept of separating populations and creating a linear fence. Do we want our children to live here forever with the help of the nuclear reactor in Dimona? Relying on that to ensure our future, with the thought that if there is a problem we can operate our Judgment Day weapon? I don’t want to live this way.

''If we want to rely only on the army and establish a closed Zionist ghetto, that’s the way; but we should turn things around and create a situation in which Jews will live here out of acceptance.''

What if the other side does not agree to that either, because they don’t want us here at all?

''I think that saying such a thing is terrible ignorance. I read Arabic and I read lots of autobiographies. It’s unpleasant for me to say this, but I find more violence and much more animosity and hatred and incitement in Jewish writing than in Arabic writing.

''Who reads Arabic here? That is, by the way, one of the absurd things: How can it be that [only] 2½% of Jews know Arabic? Who is telling us about what’s happening on the other side? The Middle East experts who see everything through the sight of a rifle? We should all know Arabic. People don’t understand how much more they could understand if they spoke the language. It is impossible to explain."