The sectarian war in Syria comes to the Iran-Pakistan border. 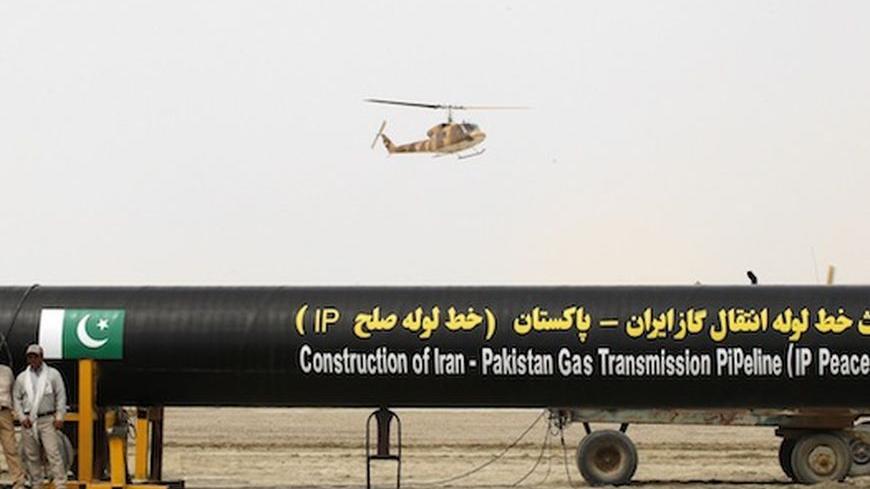 Iranian workers stand near as a security helicopter lands during a groundbreaking ceremony to mark the inauguration of the Iran-Pakistan gas pipeline, in the city of Chahbahar in southeastern Iran, March, 11 2013. - REUTERS/Mian Khursheed

The Iranian government and the Iran's Revolutionary Guard Corps in particular are paying a price with the lives of Iranian soldiers inside Iranian territory for their support of Bashar al-Assad in Syria.

This seems to be the gist of the statement from Jaish al-Adl (the army of justice) that was issued after it claimed responsibility for the deadly Sept. 26 attack in the town of Saravan in Iran. The attack left 14 Iranian border guards dead. Five others were wounded.

In response, the Iranian government executed 16 “rebels” in the Sistan and Baluchistan province, where the attack took place. The move was condemned by the Iranian Nobel Peace laureate Shirin Ebadi, who said, “The execution of people who were clearly not responsible for the attack on the border officials within 12 hours of the attack makes the move an act of revenge and contrary to fair legal procedures.”

The strong knee-jerk reaction from the regime judiciary apparatus is a clear sign of concern.

Jaish al-Adl, is not a widely known organization. It's a small Salafist organization based in Iran's border area with Pakistan. Its numbers are believed to be in the hundreds, if that. It trains children to join its ranks. According to the head of Iran’s border police, its establishment was declared only last year.

So why should the Iranian government be so worried about such a tiny organization that was established only recently?

The reasons seem to go beyond the organization itself.

In 2010 Iran arrested Abdolmalek Rigi, the head of the Baluch Jundollah movement, another militant Sunni organization which had been attacking Iranian civilians and security forces for years from Iran’s border area with Pakistan. According to the Iranian site Diplomacy.ir, which is close Iran's former reformist Foreign Minister Kamal Kharazi, the arrest was made “with the cooperation of the Pakistani intelligence agency.” It seems that in Iran it was believed that the arrest could put an end to the threats posed from Iran’s border with Pakistan by militant Sunni organizations, especially since the Pakistanis helped.

Such feelings in Tehran are likely to have been reinforced after Iran signed a security agreement with Pakistan in February 2013 “to cooperate in preventing and combating organized crimes, fighting terrorism and countering activities which pose a threat to the national security of either country.”

The new attacks by Jaish al-Adl could mean that the Pakistanis could be going back on their word and agreement.

What is most probably causing concern in Iran is that the previous security agreement between Iran and Pakistan was signed in February when Pakistan had a different prime minister, Asif Ali Zardari. On June 5, Pakistan elected a new prime minister, Nawaz Sharif.

Compared to his predecessor, Sharif is much closer to the Saudi regime, which is one of Iran’s staunchest rivals in the region. In fact, when Sharif was deposed in a bloodless coup as Pakistan's prime minister in 1999, it was Saudi intervention which saved him from jail. He then went to live in Saudi Arabia until 2007. Since coming to power, Sharif has met with the Saudi king again.

These days, the Saudi regime is very worried about the possibility of an Iranian-US rapprochement. This is in addition to new reports that Iran's ally Hezbollah is readying to help the Assad launch a major operation in the mountainous Al-Qalamoun region between Damascus and Homs in Syria. Should the campaign succeed, it would be a second major blow for the anti-Assad forces which the Saudis back, after the loss of Qusair in June this year.

Pressuring Iran on its very border by sponsoring attacks by Salafist forces such as Jaish al-Adl could very well be the Saudi government's way of exacting a price from the Iranian regime for its support of anti Saudi forces in Syria as well as other places such as Iraq. The fact that US and Iran may repair relations could very well have created an added impetus for the Saudis to do this. Riyadh could be worried that the Americans may no longer feel obliged to support their anti Iran activities in the region.

What could have made it easier for Sharif to tacitly cooperate with the Saudis by looking the other way while attacks are launched against Iran from its territory is the recent cooling of economic relations with Iran.

For years the two sides have been working on the peace pipeline gas deal to enable Pakistan to import gas from Iran. These days there are reports that Iran is losing interest and the deal may not go through after all. The Iranians seem tired of inaction from the Pakistani side, which is now asking for money from Iran to construct the pipeline on its side of the border.

Meanwhile, there are concerns on the Pakistani side, too. A new report by the Islamabad-based Sustainable Development Policy Institute (SDPI) has described the gas contract with Iran as a “death sentence for Pakistan's economy.” There are also concerns in Pakistan that reaching a deal with Iran could subject Pakistan to penalties, as Iran is currently under sanctions.

Jaish al-Adl is too small to cause any major challenge to Iran’s security. However, as its recent assault showed, its an organization which can not be ignored by Iran. The Saudis want to increase their leverage against Iran and just like Syria, they are unlikely to think twice before supporting Salafist organizations to attack Iran or its allies repeatedly, and in as many places as possible. The question is: where are they likely to apply this method on a wider scale next? The answer could be: Lebanon.