As militants begin to prepare for the spring offensive, Iran will face new challenges in dealing with its neighbor to the east. 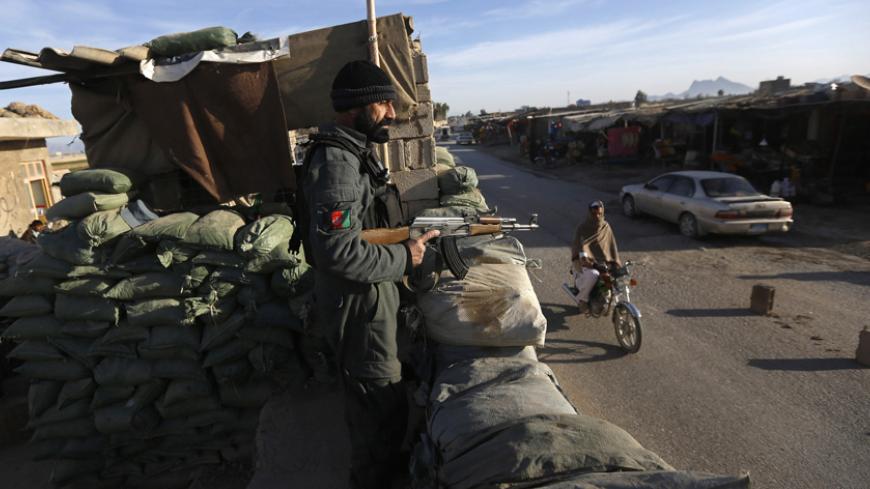 A policeman keeps watch at a checkpoint on the outskirts of Farah province, Feb. 4, 2015. - REUTERS/Omar Sobhani

Iran is likely to face renewed challenges in Afghanistan, where militants are expected to launch their annual spring offensive. While much focus is on the issues the Islamic republic faces to its west, in Iraq and Syria, the challenges to its east may well prove to be at least equally vexing for Tehran.

Over the last 15 years, the Afghan situation has epitomized the ups and downs Iran has experienced in its relations with its Arab rivals and the United States.

After 9/11, Iranian-US contention over Afghanistan turned into cooperation, with the aim of ousting the Taliban. For the United States, the Taliban had to be removed as it sheltered al-Qaeda. For Iran, the regime in Kandahar constituted a genuine security threat; in 1998, following the killing of Iranian diplomats in Mazar-i-Sharif, Iran and Taliban forces were on the verge of all-out war.

Shared goals provided impetus for crucial Iranian-US intelligence and security cooperation. Senior Iranian sources confirm to Al-Monitor that Tehran even offered two airfields on its border with Afghanistan for use by US transport aircraft. Perhaps more importantly, Iran facilitated coordination between its Afghan allies and Washington, and played a vital role in the establishment of a new Afghan government. Current Iranian Foreign Minister Mohammad Javad Zarif is widely credited with the latter.

Of note, the Afghan operation was Qasem Soleimani’s first major assignment after assuming command of the Quds Force. According to former Iranian diplomat Hossein Mousavian, Soleimani was among those who advocated cooperation with the United States to oust the Taliban. The subsequent breakdown in US-Iranian cooperation was ensured by George W. Bush’s 2002 State of the Union address, in which Iran was labeled a member of the “axis of evil.” One Iranian source told Al-Monitor, “After that, on Iraq, Iran wasn’t ready to fully cooperate with the US.”

The Afghan situation is also a microcosm of Iranian tension with some of its southern Arab neighbors. Along with Pakistan, Saudi Arabia and the United Arab Emirates (UAE) were the only countries that recognized the Taliban regime. The method of the Taliban overthrow was a particular Saudi concern; a textbook example of Iranian-US collaboration that still causes alarm in Riyadh.

Of the myriad threats the Islamic republic faces to its east, three are most pronounced: the increasing rise of militant Salafism, drug trafficking and drought.

While Iran has battled the Taliban for decades, the militants’ spring offensive may pose a new challenge in the form of the Islamic State (IS). It's difficult to ascertain the veracity of the numerous reports of an increasing IS presence in Afghanistan. However, the threat of the latter appears credible enough to compel Afghan President Ashraf Ghani to raise alarm. Ghani told US Congress on March 24 that IS is sending people to his country to “test for vulnerabilities.” IS, which already constitutes a serious threat to Iran through its presence in Iraq, could soon threaten Tehran from Afghanistan, too.

Alarmingly for Iran — and Pakistan — Ghani added that the IS scouts are primarily operating in the south and west of Afghanistan. Those areas neighbor Baluchistan, a nexus of militancy, smuggling and drug trafficking on both sides of the Iranian-Pakistani border. Indeed, the prospect of IS seeking to join forces with militant Iranian Baluchi Salafists should not be taken lightly.

While splintered, militant Salafism within Iran’s borders is a real security threat. Members of the Rigi clan have played an important part in this respect. Abdolmalek Rigi led the outlawed Jundallah until his detention and execution by Iranian authorities in 2010. Jundallah has killed and injured hundreds of Iranians in numerous attacks. Now, Iran seeks the extradition of Abdolmalek’s brother Sattar, who Tehran says has been detained by Pakistani authorities. Sattar Rigi is reported to head Jaish ul-Nasr, an offshoot of Jundallah. Islamabad is also reported to hold Salam Rigi, a cousin of Abdolmalek. Salam reportedly heads Jaish ul-Adl, another offshoot of Jundallah noted for its widely covered abduction of five Iranian border guards last year.

Afghanistan’s position as the world’s biggest producer of opium also constitutes a threat to Iran. The United Nations Office on Drugs and Crime reported a 17% increase in potential opium production in 2014, estimating it at 6,400 tons. Revenues from drugs help pay for militancy within Afghanistan. Moreover, many smugglers operate in militant-infested border areas, which coupled with dire local economic conditions, provide breeding grounds for lethal violence.

Notwithstanding the devastating material and non-material toll of addiction in Iran, which sits on a major drug smuggling route, there is also the danger posed by drug smuggling revenues inside Iran. As Al-Monitor has reported, $3 billion of the latter has entered the Iranian economy, with the interior minister reportedly announcing and then retracting a claim that “dirty money” has penetrated politics.

Dysfunctional hydropolitics also poses a major challenge to the Islamic republic. In this case, development in Afghanistan is causing a great headache for Iran.

The dire condition of Lake Hamun’s wetlands in Iran’s southeastern Sistan-Baluchestan province is widely reported. According to Iran’s Environmental Protection Organization, the water served almost half a million people a decade ago. Today, it’s dry. The wetlands are fed by Afghanistan’s Helmand River, whose flow Tehran and Kabul have long disputed. The Taliban completely cut off flow in 1999. Dialogue on the issue resumed when the new Afghan government came into power, but the issue remains unresolved. Drought, irrigation, diversion and popular growth have all reportedly contributed to the situation.

Less publicized, but potentially far more devastating, is the Hari River debacle. Originating in the Hindukush, this waterway partly acts as an Iran-Afghan border and ends in Turkmenistan. In 1991, Iran and Turkmenistan agreed on the construction of a dam on it, with shared output. In 2004, the “Friendship Dam,” which provides major resources for irrigation but is also designed to secure the drinking water of Iran’s second-largest city Mashhad, was completed. Despite the Iran-Turkmenistan cooperation, there is currently no agreement with Kabul. Afghanistan is reportedly constructing two dams on the Hari River. It is feared that this will reduce the quantity and quality of the reserves of the “Friendship Dam,” which supplies drinking water to over 3 million Iranians. Once the Salma Dam project, delayed for decades because of a plethora of issues including war, is completed, it will cut flow in Iran’s section by 73%.

In sum, Afghanistan is set to pose a major challenge for Iran in 2015. How Tehran reacts may very well cause, end or contain conflict that could make other turmoil pale in comparison.