Saudi Decision on Security Council Is About Syria

Saudi Arabia’s decision to decline a Security Council seat expresses anger in some Sunni Muslim quarters about the Syria war. 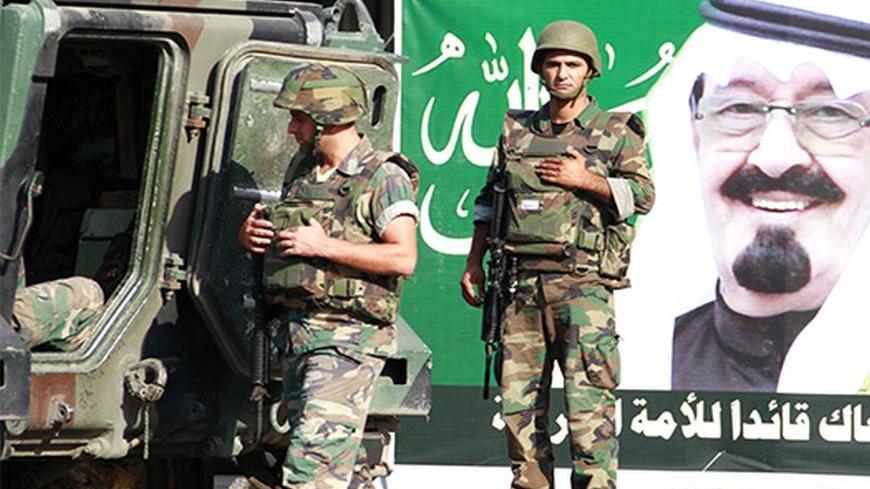 A poster of Saudi Arabia's King Abdullah is behind Lebanese soldiers in Tripoli, Lebanon, where gunfire broke out between people loyal to different sides in the Syria war, Oct. 23, 2012. - REUTERS/Omar Ibrahim

Saudi Arabia’s decision to decline a UN Security Council seat is neither ordinary nor fleeting. Many may criticize the move, while others might wonder how Saudi Arabia can demand reforming the United Nations, which arose in the aftermath of World War II, while the kingdom still needs reforming itself and is far from democratic. While international parties, most notably Washington, tried to play down the decision, and others considered it a routine way of criticizing the international system, the Saudis' move was nonetheless surprising and shrewd.

The first to notice this was Russia, an old Middle East player that today is taking on a new role as the United States focuses on its internal affairs while seeking regional compromises. By quickly expressing its bewilderment at the decision, Moscow essentially recognized the significance and dimensions of it, the primary aim being to strengthening the negotiating positions of the kingdom and its Arab allies, especially in light of the looming US withdrawal from Afghanistan, the explosive situation in Sudan, harbingers of the Arab Spring, and other developments. What may end up determining the shape of the Middle East in the next phase, however, is the Geneva II conference on the Syrian crisis, especially with Russia having succeeded diplomatically, and Iran militarily, in prolonging the Syrian regime’s life.

The other and more important aspect of the Saudi decision lies in the kingdom’s identity and roles. One should not belittle the decision, ignore its real causes, or consider Saudi Arabia a mere US protectorate that obeys Washington, which affords it security and strategic cover. In fact, Saudi Arabia’s decision was significant because it resonates in the Arab and Sunni Muslim street, which has been accumulating disappointments and experiencing growing frustration as a result of erratic international politics and the Barack Obama administration’s sharp turns.

One should not forget that Saudi Arabia occupies a leadership position in the Islamic world. It was recently joined by Egypt, the main center of gravity in the Arab world, after its relations with Washington reached a new low due to the US stance toward the Mohammed Morsi government and its decision to suspend aid to the Egyptian military. Even Turkey, the third “Sunni pillar” so to speak, has expressed understanding for the Saudi position. The issue is about widespread Sunni resentment among Arab states from the Persian Gulf to the Atlantic Ocean. Of importance here, the Saudis' decision reflects this popular anger.

The Saudi statement rejecting the Security Council seat criticized the United Nations for failing to find solutions to Middle East crises. Its complaints included failing to deal with the nuclear threat by not imposing effective supervision on the Iranian nuclear program and not finding a solution to the Syrian crisis and ending the related humanitarian tragedy unseen in recent decades. They also highlighted the failure to craft a just and comprehensive solution to the Arab-Israeli conflict that takes into account the conscience of the Arab street at a minimum. The Saudis called for the need to reform the United Nations, particularly its decision-making process involving the veto system. This position is in sync with a previous French request for suspending the veto power when dealing with major crises involving large-scale crimes.

The Saudis' rejection also has political dimensions. The US-Saudi relationship has always been close, but that is of little comfort to countries susceptible to falling under Iranian influence . These countries are concerned, for example, by how the United States decided to halt aid to Egypt while at the same time US representatives in Geneva were discussing the parameters for lifting the economic sanctions on Iran. Although none of the sanctions have yet been lifted, the new policy of openness is not associated with parallel gestures to reassure the anti-Iran contingent (excluding Israel) in the region.

The Syrian issue is proof of that and is no doubt at the core of the problem. Saudi Arabia openly disapproves of how the Syrian crisis was reduced to the chemical weapons issue. The US-Russia agreement on destroying the weapons did not include a settlement for ending the war, but instead left the crisis open-ended. The United States seemed to only care about Israel’s security, appearing indifferent to the Syrian people’s plight and the effects of that tragedy on the Arab and Muslim conscience. In short, the so-called US allies find themselves facing a declining US role, to Russia’s advantage, and a rising Iranian tide, from Tehran to Baghdad to Beirut. It is as if the US allies are the ones paying the price for the US rapprochement with Iran.

In Iraq, the Sunnis are marginalized. Prime Minister Nouri al-Maliki’s government has failed to reunite the country, which has fallen under Tehran's influence. The situation in Lebanon is stalemated, with the decision on forming a government having collided with the desires of Hezbollah, Iran’s military wing on the Mediterranean. Hezbollah is insisting on a “blocking third” [in the cabinet] and on formal recognition of its “army-people-resistance” triad, which would allow it to keep its weapons outside the state's authority.

Syria has been torn apart and emptied of its people. Millions of displaced persons are flooding neighboring countries, threatening the region’s security and stability in ways unseen since World War II. Neither the Security Council nor the broader international community has been able to do anything to stop it. All they have done is give the Nobel Peace Prize to the team entrusted with dismantling Syria’s chemical weapons. The most dangerous aspect of this situation is its potential effect on the victims and others. If the events of 9/11 revealed anything, it is the correlation between repression and violence, and feelings of humiliation and recourse to terror.

The Kingdom of Saudi Arabia and Egypt may not be model democracies, but they do represent Arab moderation, which must be sustained by taking at least a minimum of its interests into account. The alternative is the growth of jihadist groups, which will not be confined to a geographic area, but will spread to any mind or conscience that feels offended or deprived. A major crisis, like that involving Syria, cannot be reduced to its chemical weapons aspect. There is still time to address the crisis before it turns, like its predecessors, into a cause of war and a source of terrorism. The Saudi decision to reject a Security Council seat should be seen from that perspective.

The Saudis' action may be a warning signal about the possible dangers to come if the kingdom were to withhold its support for the ongoing diplomatic process, which has thus far proved incapable of finding solutions. In such a case, Saudi Arabia may decide to withdraw the two cards it holds — Arab moderation and Sunni representation coupled with Islamic legitimacy — both of which are necessary for any future settlement.