The warming trends in US-Russia and US-Iran ties may or may not benefit Lebanon, unless Iran and Saudi Arabia end their sectarian regional policies. 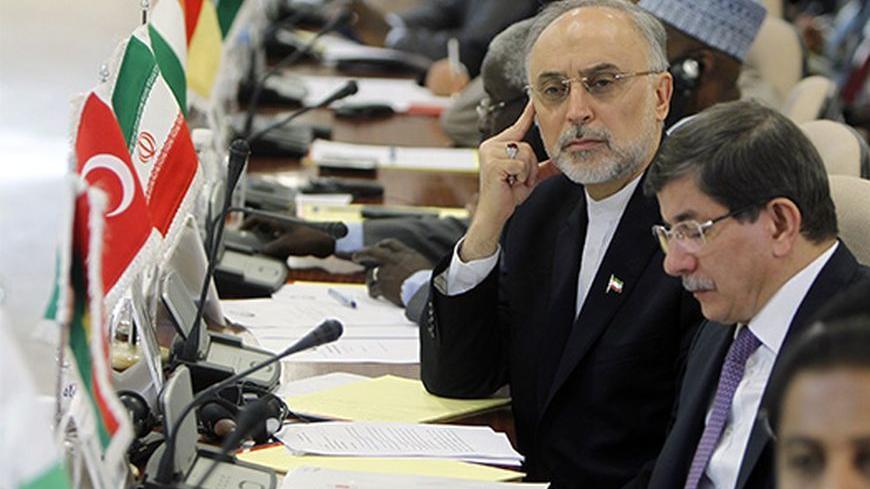 Iranian Foreign Minister Ali Akbar Salehi (L) looks past his Turkish counterpart Ahmet Davutoglu (2nd R) during the opening of a ministerial meeting by the Organization of Islamic Cooperation, Jeddah, May 13, 2013. - AFP/Getty Images

Lebanon is in a state of waiting — waiting for a multitude of developments that might be a long time coming, and, in the process, lead the country into a constitutional vacuum.

Since an internal agreement about the main issues of Lebanon’s social contract and foreign policy has failed to materialize, the country’s heartbeat has become linked to the pace of the multitude of crises that continue to ravage the region. The role of state institutions has gradually been eroded in terms of ensuring stability, as well as making policies and important decisions, which have been relegated to regional powers that sponsor local political entities.

The last of these crises, and the most influential among them on Lebanon’s political and economic reality, is the Syrian one. The standstill that prevails in Beirut today concerning the formation of a government and the lack of regularity in institutional functions, is but a reflection of the developments underway in Syria, and the regional equations that are associated with them.

The first expectation of this small country that surrendered its fate to the game played by major powers, is tied to the results of the American-Iranian rapprochement, assuming it continues to progress and is not sabotaged by the interests of those whom it has excluded. The rapprochement has not yet led to tangible results on the ground, nor has it affected any important tracks that would be beneficial to Lebanon in any way.

It faces many obstacles; primary among them is the intransigence of the Israelis, who have not hidden their concern about the budding entente and the possibility that economic sanctions on Iran will be lifted, even if the latter does not completely guarantee its commitment not to develop nuclear weapons. Israel thus raised the tone of its rhetoric and urged the international community to avoid falling for the trap, as diplomatic efforts ground to a halt following Netanyahu’s “a wolf hiding in sheep’s clothing” comment. Israel’s margin for maneuvering is narrow, and its time frame is limited.

Escalating the nuclear issue was not restricted to words uttered on the podium of the United Nations, but included a few days later, during an interjection at the Begin-Sadat Center for Strategic Studies last week, talk about Iran’s expansionist ambitions, and accusations that Tehran was trying to control the whole of the Middle East. The escalatory tone reached its apogee yesterday, Oct. 10, with Lebanon being directly mentioned with extremely dangerous words spoken by the Israeli army’s Chief of Staff Benny Gantz, as the home of Iran’s proxy on the Mediterranean, Hezbollah, which poses a threat to Israel's northern border.

In short, the American-Iranian rapprochement did not carry with it anything to appease people in the short term. On the contrary, it raised the level of tension along the Lebanese-Israeli border. Hopes for change have been transformed into concern that a new war would erupt, with Hezbollah perhaps benefiting from the prevailing anxiety to bolster its position as a movement resisting Israel, and repair the damage done to its reputation by its immersion in the sectarian war that rages in Syria.

The second expectation relates to the Russian-American understanding and its repercussions on the internal situation in Syria and the reflection thereof on the map of internal Lebanese alliances. The matter revolves around Syrian President Bashar al-Assad’s fate, as well as the role and geographical scope of influence of his regime, if it manages to survive.

Geneva II might answer these questions, but the truth of the matter is that a conference of this type, if it were to occur, would in one foul swoop define the future of Syria and Lebanon alike, for both serve as an arena for a battle waged between the same regional powers. Its holding is neither as yet a foregone conclusion, nor is the framework for any ensuing potential agreement between rival sides.

The Russian-American understanding revolved solely around one pivotal issue: the need to dismantle Syria’s chemical arsenal. It is true that implementing the conditions of this understanding led to an international consensus and the adoption of the globally endorsed UN Resolution 2118. It is also true that that the endorsement verged on the extraordinary when American Secretary of State John Kerry praised the Syrian regime for its cooperation.

It is just as true, however, that the understanding troubled many Arab factions because it extended the lifespan of the regime and reduced the Syrian crisis to the issue of chemical weapons, to the point where the problem at hand no longer is securing the rights of a people demanding more freedom and a higher level of participation, but has become limited to the extent of the regime’s cooperation with the international team tasked with dismantling its chemical arsenal.

Saudi Arabia is atop the list of countries critical and wary of the Syrian people’s cause being distorted, reduced and hollowed out. It is no longer a secret to anyone that the relationship between Saudi Arabia and the United States has been degraded as a result of the Syrian affair. The issue has ramifications on the Lebanese scene as well: The Saudi-American axis has always been an equalizer in the face of Iranian influence, and has been active in backing the faction that opposes the alliance led by Hezbollah.

The United States and Saudi Arabia agree about the need to protect Lebanon, empower the Lebanese state and confine weapons to the Lebanese army. They disagree, however, about the approach to use in dealing with the Syrian crisis, and about how to best support the Syrian opposition. As long as this issue is not resolved, Saudi Arabia will not make any concessions on the Lebanese track, where it holds two trump cards: Sunni representation and economic assistance, which has become more vital in a country suffering from uncontrolled recession, further exacerbated by a socio-economic catastrophe the likes of which Lebanon, and the region, has never seen. This catastrophe is, of course, the Syrian refugee crisis, which has grown beyond the worst of expectations.

In short, the results of both tracks — the Russian-American understanding and the American-Iranian rapprochement — are foregone. The first will not change Hezbollah and its Iranian sponsor’s approach, at a time when both of them believe that they are winning, if only temporarily, the battle to keep Assad’s regime alive. Nor will America’s openness toward Iran reassure Saudi Arabia and drive it to temper its stance. On the contrary, it has added fuel to the sectarian fire that rages because of its disregard for the main issue at hand.

Lebanon is therefore caught between a rock and a hard place, unless the Saud family’s rationality were to converge with Iran’s usual pragmatism and a temporary or partial deal were to be cut in order to manage the disagreement at a minimum cost and avoid a protracted confrontation that would exhaust both their resources and power.