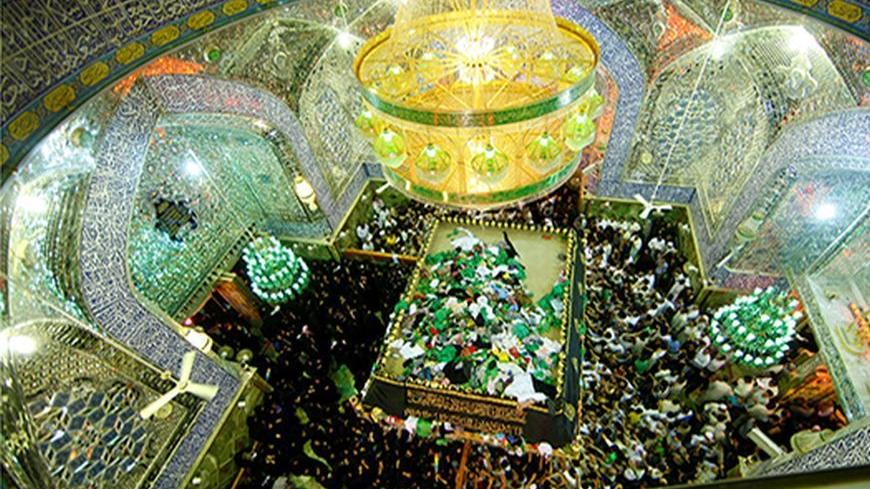 Shiite pilgrims gather to mark the death anniversary of Imam Ali at his shrine in Najaf, July 30, 2013.

The victory of the moderate faction in the 2013 presidential elections in Iran has been welcomed by the Hawza of Najaf. The religious authorities as well as the instructors there had hoped that the radical policies of the preceding eight years would finally come to an end. The election results have already brought a reduction in tensions between Iranian government officials and the religious authorities in Najaf, who did not receive former Iranian president Mahmoud Ahmadinejad. They refused to grant him an appointment during either of his two trips to Iraq. In contrast, the current foreign minister, Mohammad Javad Zarif, visited all four grand ayatollahs in Najaf on Sept. 9, shortly after taking office, on his first trip to Iraq.

News reports on the interactions between Iran and the United States are being closely followed in the Hawza in the hope that violence in the region might be brought under control. Such changes in policy — interpreted by instructors and students at the Hawza as a sign that the Iranian government is moving toward moderation and away from radicalism — have been warmly welcomed. In the past, the Hawza had criticized some of the Iranian government's radical policies, and in retaliation, Al-Kawthar, the state-owned Arabic-language network, broadcast programs in which the institution and its religious leaders were themselves strongly criticized.

The support the new administration is enjoying outside and inside Iran, the outcome of its moderated policies, has been greeted negatively by the radical faction inside Iran. Upon Rouhani’s return to Tehran from the UN General Assembly gathering in New York, a mob of about 100 people attacked the president’s car. At the same time, Keyhan’s Arabic edition, which has close ties to the Principlists, and Al-Kawthar broadcast reports about the meeting between Zarif and Grand Ayatollah Ali al-Sistani. According to their stories, Sistani considers the wise leadership of Iran's supreme leader, Ayatollah Ali Khamenei, to be the reason for the strength of the country's Islamic government and that all of Iraq's problems are because it lacks such leadership. In addition, Sistani called on everyone to take note of this fact and said that he prays every day for the leader of Iran.

The broadcast of this story angered the members of the Hawza community. They called it an abuse and an immoral representation of the religious authorities and seminary schools. One instructor present at the meeting between Zarif and Sistani denied the accuracy of the story and briefly described what happened to Al-Monitor.

According to him, “Ayatollah Sistani said to the foreign minister, 'I have read most of your book Mr. Ambassador, and I value your experience and consider you deserving of your position as the foreign minister.' Then he added that Zarif has a difficult road ahead of him in dealing with the nuclear issue and the sanctions and then emphasized the importance of complete transparency regarding the nuclear issue, especially in light of what he [Zarif] had said about its peaceful nature.”

In addition, a source close to Zarif's office informed Al-Monitor that the foreign minister has not granted any interviews on his meeting with Sistani and that everything being attributed to him in reports and broadcasts is therefore false. Both Keyhan and Al-Kawthar reported the story without clearly identifying their sources. More important, the timing of the story — almost a month after the meeting took place and shortly after Zarif returned from the United States — has added to suspicions.

There appear to be two reasons behind the media's actions. One is opposition to the moderate policies of the Hawza of Najaf in trying to tamp down religious conflicts, actions in direct contrast to the more radical policies of the Principlists in Iran. Part of this opposition is also to try to weaken Sistani's position in Iraq by attributing certain words to him, knowing that they will increase nationalist sensibilities among the Iraqi people. The second reason is to sabotage efforts by Rouhani to improve relations with important actors in the region and beyond, while essentially hoping for a continuation or return to the policies of the previous administration.