The Return of Mohammed Dahlan

The UAE and Egypt are pushing for a reconciliation between Palestinian Authority President Mahmoud Abbas and former Gaza strongman Mohammed Dahlan, who would return to Fatah. 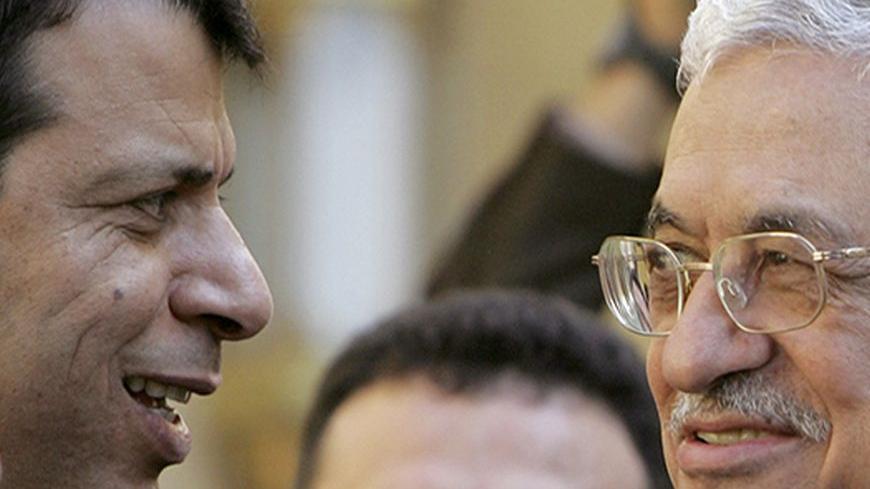 The possibility of the return of former Gaza strongman Mohammed Dahlan to Palestine appears to have improved in recent months. Fatah sources told Al-Monitor that Palestinian Authority President and Fatah Chairman Mahmoud Abbas has softened his stance toward the former member of Fatah's Central Committee.

The sources, however, cautioned against early celebrations by Dahlan and his supporters, noting that Abbas will not automatically allow Dahlan to assume his former post. Fatah suspended Dahlan from the Central Committee in January 2010, severing all ties with him. He will only be allowed to return (and be guaranteed protection) as an elected member of the Palestinian Legislative Council from Gaza. He will still have to respond to official charges of corruption and murder in the West Bank before his status in Fatah is considered, the source told Al-Monitor. No time frame has been agreed upon, but it is related to ensuring that all details are accepted by both sides.

Dahlan responded to media reports about his reconciliation with Abbas with a 13-minute, high-quality video aimed generally at Palestinians and posted on YouTube on Oct. 28. It got more than 23,000 hits within the first two days.

In the video, which appears to have been edited a few times, Dahlan confirms that a number of individuals have attempted to mediate between himself and Abbas — including Yasser Abed Rabbo, secretary of the Executive Committee of the Palestine Liberation Organization, Said Khoury, a Palestinian businessman who lives in the United Arab Emirates (UAE), and the Libyan ambassador to Jordan — but all attempts at reconciliation have thus far failed.

Discussions about Dahlan’s return do not appear to have stemmed from a change of heart among the Palestinian leadership, but rather is the result of a desire to improve relations with the rich Arab Gulf state, the UAE, where Dahlan has been residing and apparently has forged close ties with the top leadership. Reports from within Fatah suggest that funding from the UAE has dried up, and the relationship between Ramallah and Abu Dhabi downgraded.

Part of the financial crisis facing the Palestinian government is the result of some Gulf states' failure to fulfill pledges made at Arab League summits. It is unclear why the UAE has taken a high-profile position in support of Dahlan. Media reports have indicated that the former Gaza leader has become one of the closest advisers to UAE leaders. In one sign of Dahlan’s closeness to the UAE’s top brass, in April Serbian President Tomislav Nikolic presented Dahlan with an award for his contribution to UAE-Serbian ties, with the media report referring to Dahlan “as a personal adviser of Mubarak Al Nahyan — heir to the throne of Abu Dhabi and deputy commander of the UAE armed forces.”

Media reports have revealed that Egypt's new rulers are looking for a reliable security expert to help seal the border with Gaza and see no alternative to Dahlan, a former head of the Palestinian Preventive Security Services. He still has a strong following among Fatah cadres and former security personnel in Gaza.

Gaps between the two Palestinian parties remain, however. Dahlan surprised many when the current peace talks with Israel began and he described the Palestinian decision to participate as “political suicide.” In addition, Dahlan has sued the Palestinian president in the International Court of Justice for allegedly violating his human rights, referring to Abbas as “a tyrant.” He asserted, “I and my family have, for a long time, been subjected to terror and harassment, persecution, arrests, defamation, threats to life and damage to property. The campaign against me knows no moral or legal limits, nor national boundaries.”

If Dahlan does return to Palestine and can somehow deal with the legal cases facing him, it will still be a long, uphill battle to return to a senior position. A Fatah source in the West Bank told Al-Monitor that the majority of the rank and file of the nationalist movement is closer to Abbas and his position than to Dahlan's. The young Gaza leader surprised many in his strong showing at Fatah's Sixth Congress, in 2009, when he was elected to the Central Committee, the highest body in the movement.

Dahlan’s situation is also connected to the post-Abbas power struggle. The 78-year-old Abbas has repeatedly stated that he will not run for president of the Palestinian Authority in the next election. Although post-Abbas politics is focused on Fatah, many independent Palestinian personalities are hoping that the public will turn away from career “guerrillas” and vote in a civilian as president.

Until presidential elections take place, however, the internal struggle within the leading former guerrilla movement will continue to capture attention. What Dahlan and his supporters want are for any future discussions about a leadership succession to include him.

Before his fall, Dahlan was seen by many as the representative of a new, young Palestinian leadership. He was arrested 11 times by the Israelis, during which time he learned to speak Hebrew. While many have strong opinions about him, Dahlan's supporters are extremely loyal. It is hard to know how extensive his support is, but it does not appear to have come close to reaching a tipping point.

Dahlan’s chances of becoming the next Palestinian leader are quite slim. The attention that continues to be focused on him might be more a reflection of the absence of an alternative, strong leader than his personal strengths and ability to win over a highly skeptical Palestinian public.