A further upgrade in bilateral relations between Iran and the United Kingdom will require action by the Iranian parliament. 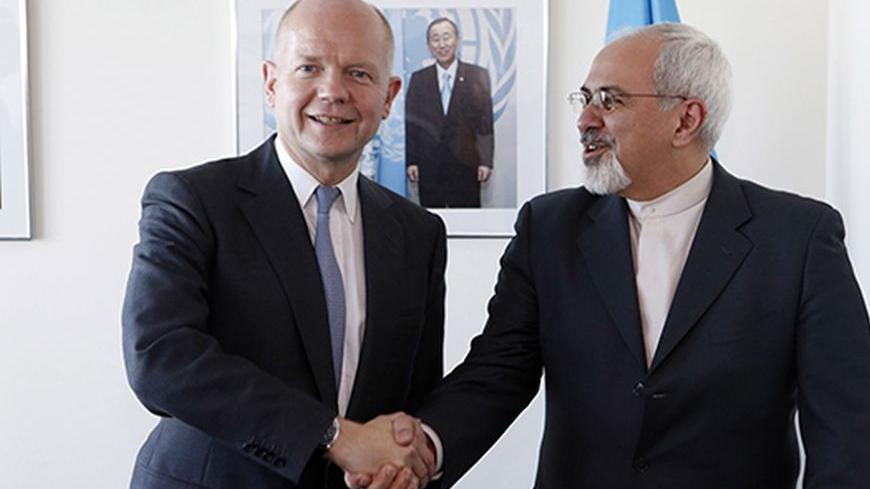 TEHRAN, Iran — It's only the beginning for the United Kingdom and Iran. Nonresident chargés d'affaires in both Tehran and London will start the step-by-step process that was agreed on by both Iranian Foreign Minister Mohammad Javad Zarif and his British counterpart William Hague in their Sept. 23 meeting in New York to re-establish relations after two years of complete alienation.

Back in November 2011, Iran’s parliament decided to downgrade relations with Britain due to new sanctions put in place by the UK. The next day, dozens of angry students stormed the British embassy in Tehran, damaging property and driving the embassy staff away. On Nov. 30, 2011, in response to the attack, the UK closed its embassy in Tehran and ordered the closure of the Iranian embassy in London.

The British-Iranian decision was preceded by an exchange of positive messages that started after the election of Iran's President Hassan Rouhani, who himself acquired his Ph.D. from a British university around a decade ago.

For sure, the reason behind the new approach isn't Rouhani's good memories of the UK, or his old friendship with some British politicians — which actually did play a role in easing the tensions — but rather a new strategy adopted by both Tehran and London that is expected to reflect positively on both the bilateral relations and the nuclear round table.

“The Britons are aware of Iran’s importance in the region,” said an Iranian official close to Rouhani’s camp when asked about the breakthrough in relations. He added, “Iran is the gate to the Middle East, and it’s not in any country’s interest to boycott us. And we know, too, that it’s in our interest to maintain better relations with the West and our neighbors.”

According to well-informed sources in Tehran, the meeting between Zarif and Hague was not the first contact between the new Iranian administration and British officials in recent months. The said, “We exchanged messages with them directly after the election. They were interested in starting a new chapter, [and] common friends in both Tehran and London played a big role in making this happen.”

The sources stressed that there are several points to be debated, including some crucial historic matters related to the colonial era. They said, “We believe that London should apologize for taking part in suppressing the Iranian people, and mainly in the 1953 coup d’état that toppled elected Prime Minister Mohammed Mossadegh with the help of the United States.” Other points to be discussed include the nuclear program, Iran's human rights record, some $1 billion frozen in Britain under the EU and UN sanctions on Iran in 2011 and any possible future cooperation between the two countries.

The decision to start with nonresident chargés d'affaires means both representatives will be based in their countries, but visit in the course of their duties. This modus was adopted due to the decision made by the Iranian parliament two years ago that limited relations to this level. To upgrade the contact, Iran needs to consult its parliament, which must vote to revoke the previous bill and adopt a new one. Our source in Tehran stresses, “The government will have to convince the Shura Council that relations with Britain are necessary and that London is showing signs of goodwill toward us, then it’s possible to see a British ambassador in Tehran and his Iranian counterpart in London.”

But what does goodwill mean in the Iranian dictionary?

"Goodwill" means a positive stance in the forthcoming nuclear negotiations, in which the United Kingdom can play a positive role to reach a deal. The Iranians believe London would be capable of directing the entire negotiations toward a happy ending if it had the genuine will. Such a role can also affect the relations with the United States and can pave the way for better ones, whereas London is able to influence Washington and be a mediator rather than a party.

“A 'no enemy-no friend' relation with the United Kingdom and the United States means we can start building confidence, and that will be reflected in several areas where we can cooperate,” said our Iranian source, explaining, "In Syria, Iraq, Lebanon, Bahrain, Yemen, Egypt, Afghanistan — even in Somalia — we can change together the face of the Middle East, but the starting point is mutual respect.”

Our source believes that Washington and London aren’t driven only by politics to revive relation with Tehran. He said, “They know that Iran, the resources-rich country, is still virgin [as compared] to other states in the region. They know well that Iran has the potential of being another China. We are under sanctions and pressure and we are sending rockets to space. We can make cars — we can manufacture anything; just imagine Iran without sanctions. This is what they saw, and that’s one of the reasons they want better ties.”

It’s said that the Iranians and the British resemble each other in their diplomatic style, as both tend to deal in a matter-of-fact way and think long term. The most important thing is that both countries have a policy of patience. A famous story here in Tehran reads, "There were two cars on a one-way lane. One was driven by an Iranian and the other by an Englishman, and they came to a point where one had to give way to the other. The Englishman opened his newspaper and started reading as the Iranian waited in his car. Minutes later, the Iranian stepped out and walked toward the Englishman, who thought he had succeeded in provoking the Iranian. To the Englishman’s surprise, the Iranian asked him to kindly pass him the newspaper after he finished reading.”

In today’s case, it seems both have decided not to wait each other out and to work together to find common ground, but in the American case, a honeymoon period is not expected. Rather, they will work on classifying the differences between them according to priority. Still, UK-Iranian relations are less complicated than those with the United States.