The Kurdistan Workers Party (PKK) has signed on to the Geneva Call’s initiative after three years of negotiation. 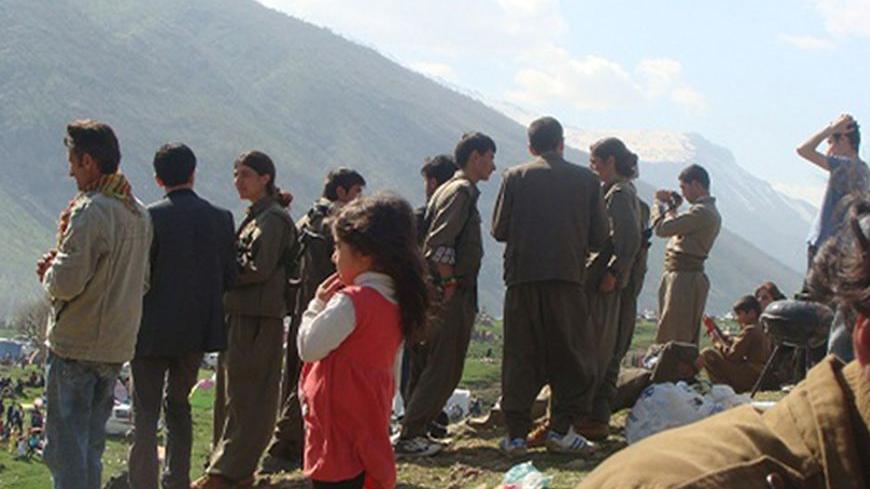 In 2010, UNICEF condemned the recruitment of child soldiers by the Kurdistan Workers Party (PKK), which had been fighting the Turkish government since 1984. After 9/11, Ankara tried to use the PKK's adoption of this practice against the organization in its international solidarity campaign against terrorism. On Oct. 5, after three years of dialogue, the People’s Defense Forces/Center (HPG), the armed wing of the PKK, signed the Geneva Call’s Deed of Commitment to protect children from armed conflict. The HPG's sister organization, the People’s Protection Units (YPG) in Syria, are now also in discussion with Geneva Calls, a Switzerland-based non-governmental organization, to sign the commitment as well. The statute of the International Criminal Court criminalizes the act of using children under the age of 15 in armed conflict.

The Child Soldiers Global Report 2008 asserted that the PKK had used children in its forces “since 1994, and was believed in 1998 to have had 3,000 child soldiers, more than 10% of them girls, in its forces based in Iraq and operating in south-east Turkey.” A survey by the Turkish analyst Nihat Ali Özcan, based on data from 2001 to September 2011, estimated that 42% of PKK rebels were 18 and under.

In 2012 the PKK’s military chief, Murat Karayilan, denied his group used these youths in armed conflict. He told a northern Iraqi news agency, “What we call tender ages are youngsters who are 16 to 17 years old. But we do not put the youth at that age into war. At the beginning, we could not find a chance to send them back since they had already come. So we tried to prepare them for the future by training them.”

A 2012 study on child labor by the US Labor Department reported that children were being recruited by Kurdish militant groups that have been “fighting for equal rights in Turkey for nearly three decades, although a cease fire declared in early 2013 remained in effect as this report went to press.” The PKK declared a truce in March 2013 and a withdrawal of its forces from Turkey, but suspended its withdrawal last month and threatened to order fighters back into Turkey.

The Geneva Call was launched in March 2000 as a humanitarian organization to persuade armed non-state actors to follow international law and convince them to respect humanitarian law.

On the behalf of the HPG, Delal Amed, a female PKK commander, signed the Deed of Commitment for the Protection of Children from the Effects of Armed Conflict. “We will make all efforts to ensure that all 16-18 year olds are separated and kept away from combat zones. We are also ready to cooperate with Geneva Call and provide access to these young persons,” Amed pledged. “The next HPG conference will adopt this new status and we will take all measures to secure compliance with this commitment.”

According to Elisabeth Decrey Warner, president of Geneva Call, the PKK and her organization will now work together on implementation, which would directly benefit some 300 to 400 children. She stated, “We commend their pledge and are confident that this will serve as an example for other armed non-state actors, notably in Syria. We also hope that it will make a positive contribution to the ongoing talks between the Turkish state and Abdullah Öcalan of the PKK movement.”

Geneva Call representatives have traveled to the city of al-Malikiya (Derik in Kurdish) for their dialogue with the YPG in Syria. In an email interview, Mehmet Balci, Geneva Call's program director for the Middle East, told Al-Monitor, “We want the YPG to review and improve its respect towards the international human rights norms. We discussed with YPG what we have observed so far in their practice in relation to the rules of armed conflict.”

The August 2013 report by the UN Human Rights Council's Independent International Commission of Inquiry on the Syrian Arab Republic accuses anti-government and Kurdish armed groups of recruiting and using child soldiers in the Syrian conflict. The report alleges, “In Afrin (Aleppo) and Al Hasakah, the YPG recruited boys and girls from the age of 12. In late 2012, large numbers were recruited to counter an attempt by Jabhat Al-Nusra to enter Al Hasakah from Turkey.”

In an interview with Inter Press Service, YPG spokesman Redur Khalil denied these allegations, claiming that there had only been individual cases. He asserted: “Recruitment of conscripts under the legal age is completely rejected, it's unacceptable and prohibited by the rules and regulations in force in this area,” Khalil said, adding, “What I want to underline is that it was only actions of individuals, not of the system or the organization as a whole.”

Geneva Call’s Balci said that the YPG has expressed its willingness to sign the same deed as the HPG, but until now has only discussed the prohibition of the use of anti-personnel land mines and the protection of women in conflict. “YPG confirmed its policy not to use children under 18 in the armed conflict. But it accepted some of their units have made use of the children as they stated in their letter to the UN,” said Balci.

In a letter to the Human Rights Council and the independent commission, the YPG explained, “A few who are under the legal age did join on a voluntary basis under the pressure of circumstances, and through the neglect of some, although they were not allowed to participate in military operations or to stay in the hot battlefields. What we want to emphasize here is that whatever breaches happened in this area was no more than actions of individuals.”

Geneva Call expects that the YPG will develop feasible measures to protect children under 18. Balci stated, “YPG expressed its concern about the right to self-defense, in case the children are attacked unlawfully, such as [when] inhabitants are attacked in the villages, as has already happened in some areas.”

In the future, Geneva Call plans to conduct trainings on humanitarian norms for members of Kurdish civil society in Syria to monitor the obligations of armed actors in Syria and improve dialogue with armed non-state actors.