An exclusive report, citing sources on the ground in Syria and Libya, says Syrian teenagers are being sent to Libya to take part in the civil war there. 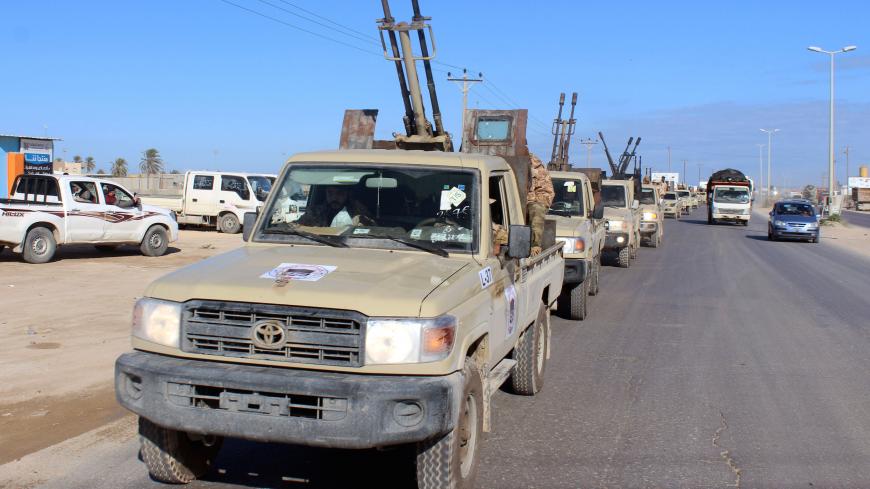 Factions of the Turkish-backed opposition Syrian National Army are recruiting minors to fight in Libya, according to a report laying out in exhaustive detail Turkey’s use of Syrian rebels to prop up Libya’s Government of National Accord.

The 40-page document, prepared by Syrians for Truth and Justice and shared exclusively with Al-Monitor, cites sources on the ground in Syria and in Libya who say Syrian teenagers have been recruited and are part of their units in the battlefield. The report will be published Monday by the nonpartisan not-for-profit organization, which documents human rights abuses in Syria.

The children are among well over 2,000 Syrian rebels believed to have been deployed over the past year via Turkey in support of the Government of National Accord against the eastern warlord Khalifa Hifter, who is backed by Egypt and the United Arab Emirates.

“Our investigation revealed that children are issued forged identity documents with false information about their date and place of birth, and are accordingly registered in the personal status records of the [Syrian] National Army,” the report says. Some of the children used the names of their older brothers in their fake papers, and the recruitment of child soldiers is ongoing, according to the report.

One of the sources, a civilian from the town of Marea in the Turkish-occupied Euphrates Shield zone in northern Syria, says that in January, a commander from one of the Syrian National Army factions, the Mutasim Division, came to his shop with three children between the ages of 15 and 16. The civilian, who was not identified by name to shield him from possible retribution, said, “They told me they would go to Libya with the approval of their families. They were very happy to receive a salary of $3,000.00 [promised to them by recruiters].

"I asked one of them if he knew how to use a weapon, and he responded he would learn all of this in the military camp where he would be with his peers.”

The child said the camp was set up by the Mutasim Division and trained children in groups of 25. The children were told that they could contact their families from Libya and return home in three months “with a big amount of money” and that they would get free cigarettes, food and housing.

The report also cites a fighter from the Sultan Murad Division, an ethnic Turkmen faction, which is fiercely loyal to Turkey. The fighter, who is currently in Tripoli, where the Government of National Accord sits, is quoted as saying there are at least five children in his group.

The fighter said, “It is very clear that they are physically children.”

The United Nations Optional Protocol on the Convention of the Rights of the Child on the involvement of children in armed conflict, which was opened for signature in May 2000, says, “Armed groups that are distinct from the armed forces of a State should not, under any circumstances, recruit or use in hostilities persons under the age of 18 years.” It additionally says, “Parties shall take all feasible measures to prevent such recruitment and use, including the adoption of legal measures necessary to prohibit and criminalize such practices.”

Syria, Turkey and Libya are all party to the Optional Protocol.

“If Turkey and the Government of National Accord, which is recognized by the UN as the legitimate representative of Libya, are either colluding or facilitating the deployment of children under the age of 18 to fight in Libya, they are committing a grave violation of the Optional Protocol,” said Mehmet Balci, co-founder of Fight for Humanity, a Geneva based nongovernmental organization that focuses on conflict prevention and promotes human rights.

Balci said in a telephone interview that Turkey frequently calls out the Kurdistan Workers Party, the Kurdish militant group that has been waging an armed insurgency against Turkish security forces since 1984, over its use of child combatants.

Bassam al-Ahmad, executive director of Syrians for Truth and Justice, told Al-Monitor that he had no evidence that Turkey or Syria were complicit in the deployment of child soldiers. The report does, however, provide compelling evidence that the Turkish government is directly involved in transporting Syrian fighters from Turkey to Libya; this has also been widely reported by the international media. Ahmad emphasized that his organization will soon be publishing a report on the recruitment of foreign mercenaries by Hifter as well.

A UN report leaked this week said the Wagner group, a Russian private military contractor, has deployed about 1,200 mercenaries to Libya in support of Hifter.

The United States has accused Russia of escalating the conflict.

The US special envoy for Syria, Jim Jeffrey, told reporters Thursday, “We know that, certainly the Russians are working with [Syrian president Bashar al-]Assad to transfer militia to fighters, possibly third country, possibly Syrian to Libya, as well as equipment.” Jeffrey did not mention Turkey's deployment of Syrian rebels.

Syrian National Army spokesman Yousef Hamoud denied in a statement to Al-Monitor that the group is sending fighters to Libya.

Ahmad, dwelling on the irony of Ankara and Damascus using foreign fighters to square off in Syria and now carrying Syrians to Libya to take part on opposing sides in yet another civil conflict, said, “Here in Syria it’s a proxy war and people are using Syrians against each other but I never thought that Syrians would be recruited by Turkey and by the Assad regime and Russian companies to fight in Libya.” He added, “People who don’t know my country well will think of my people as mercenaries. It’s really very sad.”

Turkish President Recep Tayyip Erdogan acknowledged in a Feb. 21 interview with CNNTurk that Turkish forces had been deployed to Libya in a “coordinating role” alongside “various teams” drawn from “an opposition force.”

He was widely believed to be alluding to Syrian opposition rebels, many of whom have been lured to Libya with dubious promises of four-digit dollar salaries and eventual Turkish citizenship. According to another report on Turkey’s intervention in Libya released by the International Crisis Group this week, Ankara has since January deployed at least 100 officers to help the Tripoli government and transferred shiploads of weapons along with “a contingent of at least 2,000 fighters of the Syrian National Army.”

The deployment of Syrian rebels allows Turkey to “score a double win,” argues Emadeddin Badi, a senior fellow at the Atlantic Council. “Turkey momentarily gets rid of those that cause them problems in northern Syria while using them as cannon fodder to shift the tide in Libya,” Badi told Al-Monitor. “It’s quite cruel, but that’s the reality.”

Turkey’s expanded role is thought to have played a critical role in slowing down Hifter’s more than yearlong campaign to take Tripoli. But it remains uncertain whether Turkey can definitively tip the balance in the Government of National Accord’s favor.

Turkey maintains that its presence in Libya is legitimate because it is based on a pair of defense and maritime agreements signed with the Tripoli government in November. Egypt, which remains at loggerheads with Ankara over Erdogan's ties to the Muslim Brotherhood, accuses Turkey of transporting "terrorists" to Libya and in a letter to the UN called the agreements void and invalid. Its claims are echoed by Turkey's other regional arch foe, the UAE.

Badi said that whether Turkey remains successful “depends on whether the UAE and Russia still want to maintain some plausible deniability about their involvement in Libya, the UAE in particular.” He continued, “Mitigating the Ankara-induced shift in the tide of the conflict involves deploying its own aerial military assets, not drones, to conduct strikes in western Libya. And yes, there are child soldiers on both sides of the conflict.”

The first credible indication that the presence of minors was more than just rumor emerged in January. Jesrpress, an independent Syrian newspaper, reported that a 17-year-old from Hasakah had died in Libya fighting in the ranks of the Sultan Murad division.

Elizabeth Tsurkov, a fellow at the Foreign Policy Research Institute who closely monitors the Syrian conflict, said it was not surprising that children were being drawn into the conflict.

“The force from which these fighters are dispatched, the so-called National Army, includes many minors in its ranks — boys with few years of schooling and no job prospects other than joining these factions in exchange for a salary,” Tsurkov told Al-Monitor. “A commander in one of these factions also told me previously that any boy who has gone through puberty is a man who can join,” she added.