Turkey’s plan to recruit mercenaries from Syria for the Libyan battlefield is gaining traction but appears to creating rifts among the Syrian opposition as fighters are lured to Libya by Turkish promises of money and more. 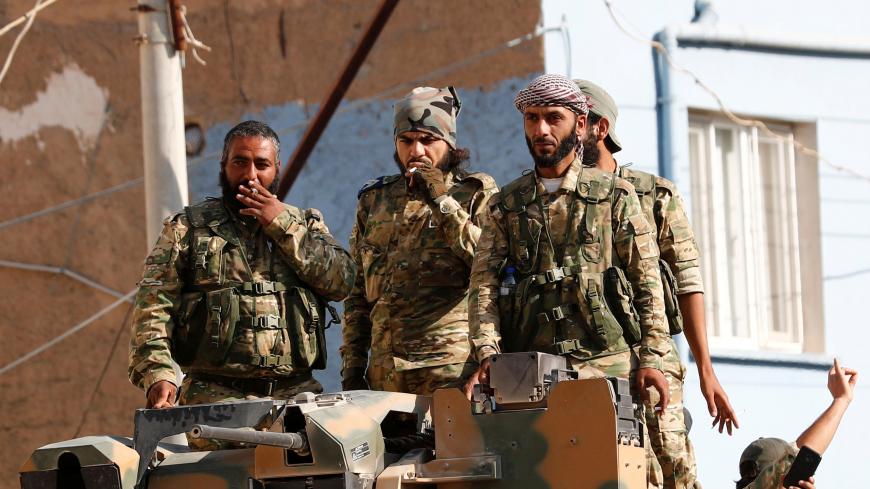 Members of the Free Syrian Army stand on top of an armored vehicle in the Turkish border town of Ceylanpinar in Sanliurfa province, Turkey, Oct. 11, 2019. - REUTERS/Murad Sezer

A week after the Turkish parliament approved a government motion for a military deployment in Libya, the scope of the mission remains unclear, but Ankara seems inclined to make use of non-military elements, including militia from Syria. While recruiting fighters from Syria may be seen as a relatively easy task for Turkey, the move appears to be opening rifts in opposition ranks.

In a television interview Jan. 5, President Recep Tayyip Erdogan said that Turkey would set up an operation center in Libya under the command of a Turkish lieutenant general and that Turkish soldiers had already started to “gradually” move into the war-torn country, where Ankara backs the Tripoli-based Government of National Accord. The Turkish troops, he stressed, will not have a combat role. According to Erdogan, “The aim of the Turkish Armed Forces is not to fight or make others fight … [but] to prevent developments that could lead to humanitarian tragedies and drag the region into instability.” Yet Turkey will have “other units as combat forces,” he said. In remarks the following day, Erdogan highlighted the role of Turkey’s National Intelligence Organization (MIT), saying that it “is duly performing its duties in Libya.”

The reason a combat force remains on the back burner is likely linked to disappointing results from Erdogan’s contacts with Russia, the United States and Tunisia, Libya’s northwestern neighbor on which Ankara had pinned hope for a logistical route and bases. In his unscheduled visit to Tunisia Dec. 25, Erdogan was given an unexpectedly chilly welcome. Shortly after the visit, Tunisian President Kais Saied denied his country had aligned with Turkey, Algeria and the Tripoli-based Libyan government against the Libyan National Army led by Khalifa Hifter, saying that Tunisia would not be part of any such axis. Parliament speaker Rachid Ghannouchi, the leader of Ennahda and a close friend of Erdogan in the Muslim Brotherhood network, said that Tunisia was not part of the Libyan conflict and could act only as a mediator.

As international and regional conditions dictate a limited or covert Turkish intervention in Libya, proxies are gaining prominence. The source of the “other” combat forces that Erdogan mentioned is the militia pool in northern Syria, especially the Syrian National Army, an umbrella force trained and equipped by Turkey.

According to the Syrian opposition news site Zaman al-Wasl, Turkish intelligence officials met with SNA leaders Dec. 22 to discuss how local fighters could be sent to Libya. The Turkish side allegedly offered monthly salaries of $2,000 to $3,000 to those who would go to Libya for at least three months. An SNA spokesman promptly denied the plan, but reports have continued to stream about hundreds of fighters from factions such as Faylaq al-Sham, Suqour al-Sham, the Sultan Murad Division and the Mutassim Brigade moving to Libya.

The Syrian Observatory for Human Rights reported the opening of recruitment centers in the Afrin region under the supervision of Turkish-backed factions, including the Hamza Division, al-Jabha al-Shamiyyah and the Mutassim Brigade, to attract fighters for Libya. According to another report by the observatory, aspirants were being offered salaries ranging from $2,000 to $2,500 on three- or six-month contracts.

On Jan. 5, the observatory reported that some 1,000 fighters from Syria had reached Libya and about 1,700 recruits were receiving training in camps in Turkey before heading to the front, including members of the Sultan Murad Division, the Suleyman Shah Brigade and the Mutassim Division. Many former members of the Hazm Movement, which dissolved under jihadi pressure several years ago, are also reportedly taking part in the training.

Turkey might be offering even more to those willing to fight in Libya. Elizabeth Tsurkov, a fellow at the US-based Foreign Policy Research Institute, tweeted Jan. 6, “Sources inside the Turkish-backed Syrian factions tell me that in exchange for fighting in Libya, fighters are being promised Turkish citizenship after six months of deployment. Multiple commanders in the factions received Turkish citizenship & passports over the past month.” She added, “A fighter in the Samarkand Brigade told me why fighters are going to Libya: ‘Turkey is carrying out a policy of starving the dog to make him follow you.’ The salaries of fighters in Syria are $50 per month — impossible to survive on. Rumored monthly salaries in Libya are $1,500.”

Meanwhile, some videos of unconfirmed authenticity have made their way to the internet. In one of them a gun-wielding fighter exclaims, “Allahu Akbar, the Free Syrian Army is in Libya to defend Islam.” According to Libyan journalists, another video, showing men speaking with an Aleppan accent and mockingly pronouncing Hifter’s name, was filmed in the al-Tekbali camp in the Salah al-Din area near Tripoli, which Hifter’s forces recently lost.

The Libyan press has drawn attention also to flights from Istanbul to Tripoli and Misrata by companies such as Libyan Wings, Libyan Airlines, Afriqiyah Airways and Buraq Air, claiming that the planes were bringing jihadis from Syria. There have also been allegations of secret passenger lists. According to email correspondence obtained by Libyan news site Al Marsad, an Afriqiyah Airways manager in Tripoli who asked the company’s Istanbul office to provide the passenger list for a Dec. 25 flight from Istanbul to Tripoli, was told, “For security reasons, the National Intelligence Organization in Turkey did not want to share the number of passengers.”

Erdogan had signaled Turkey’s intention to make use of militia forces on Dec. 10, when he mentioned that the Russian private military company Wagner was helping Hifter’s forces in Libya and said that Turkey could resort to similar means.

Those in the Syrian opposition who saw Turkey’s recruitment of rebel support for its Euphrates Shield, Olive Branch and Peace Spring operations in Syria as a diversion from their struggle against the regime are now opposed to the Libyan venture as well. The Libya campaign has coincided with a fresh offensive by the Syrian army on the key town of Maaret al-Numan in Idlib. Once again, some factions in Turkish-controlled areas fought shoulder-to-shoulder with the jihadist Hayat Tahrir al-Sham.

One could argue it is no surprise that Islamist groups linked to the Muslim Brotherhood would be willing to help their brethren in Libya, that Turkmen groups controlled by MIT would join that venture or that foreign fighters facing the end of the road in Idlib would look for a new battlefield. Yet, for opposition groups whose primary concern is a regime change in Syria, the Libya venture is a problem. Salim Idris, the SNA’s chief of staff and defense minister in the self-proclaimed Syrian interim government based in the Turkish city of Gaziantep, is allegedly on the brink of resignation along with several other commanders. Though a resignation letter circulated on social media turned out to be fake, the discomfort of such opposition figures is visible on various platforms.

Furthermore, some of the factions in northern Syria that inevitably benefit from Turkish patronage in Turkish-controlled areas have a history of ties with a rival axis led by Saudi Arabia and the United Arab Emirates. Idris, too, belongs to them. Such bonds prevent them from tagging along with Turkey against Hifter, who is backed by Saudi Arabia, the UAE and Egypt.

As the above reports suggest, Turkey has little option but to loosen its purse strings and offer Turkish citizenship to desperate fighters to lure them to Libya. Yet, if the militants transferred to Libya reach a number that weakens the battlefield in Syria, the mainstays of Turkey’s Syria policy might crack and some factions might turn their back on Turkey. Moreover, the Libyan venture would make things easier for Russia and the Syrian government as they intensify their operations against the rebels in Idlib.

The plan to move militias to Libya is also significant in terms of Turkey’s future. It is a sort of a test run for Erdogan on how he could make use of thousands of fighters who will flock to the Turkish border once the Syrian campaign comes to a close. For the militia heading to Libya, Turkey will be the place to retreat after the mission is over. With Turkish citizenship apparently guaranteed, they would continue to be useful elements for Ankara, both at home and abroad. They would make for a large pool of candidates to employ in a prospective private military company, which, Erdogan’s former senior advisor Adnan Tanriverdi says, Turkey needs to establish. The retired major-general is the founder of SADAT, a company set up as an international defense consultancy. In remarks to the media last month, Tanriverdi denied that SADAT was involved in mercenary activities, but argued in favor of setting up such a company in Turkey, saying it would take burden off the Turkish army, be useful as a foreign policy tool and earn the country hard-currency revenues. Erdogan’s messages over the past month indicate that he is inclined to embrace the idea.