Though the Free Syrian Army denies it has sent fighters to Libya, hundreds of Syrian fighters are now in Libya after being lured by high salaries. 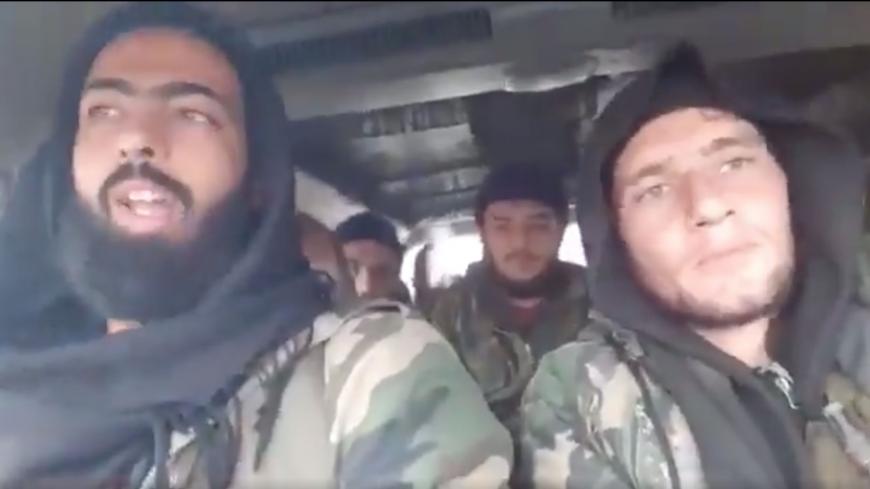 Syrian troops from the National Army of the Free Syrian Army are seen in a still from a video in which they say they are on their way to Libya, video uploaded Jan. 8, 2020. - Twitter/@hassinaouch

ALEPPO, Syria — Hundreds of fighters from the National Army of the Free Syrian Army (FSA) headed to Libya in December 2019 to fight alongside the Libyan Government of National Accord (GNA) against forces led by Gen. Khalifa Hifter.

​The deployment came after Turkey agreed to help support the GNA against Hifter’s offensive in the Libyan capital Tripoli. According to leaks circulated by opposition media, Turkish security officials met with FSA leaders in December 2019 and discussed the deployment of Syrian fighters to Libya, in return for a salary. Syrian soldiers will reportedly receive up to $2,000 monthly for participating in the mission in Libya, while Syrian commanders will receive $3,000. Neither the official Turkish side nor the Syrian opposition confirmed the reports.

Meanwhile, Turkish Foreign Minister Mevlut Cavusoglu denied Jan. 15 that Turkish citizenship or money had been given to National Army soldiers in exchange for fighting in Libya. “These allegations are completely false,” Cavusoglu told CNN Turk. The GNA also denied the presence of Syrian fighters in Tripoli Dec. 29.

The deployment sparked controversy among the opposition in Idlib and the countryside of Aleppo in northwestern Syria, where Syrian regime forces continue to carry out ground and aerial strikes.

The controversy prompted the Syrian Ministry of Defense in the opposition's interim government to issue a statement Dec. 25 denying it had ever received any request from Turkey to send fighters out of Syria.

“We categorically deny sending any of our forces and military formations to Libya," the ministry stated. "Our priority in the National Army is to protect our Syrian people from the regime's militias and its Russian and Iranian supporters.” In turn, the FSA also denied the reports about Syrian fighters being deployed to Libya.

Still, activists on social media shared several videos showing fighters said to be affiliated with the National Army at al-Takbali camp in Tripoli's Salah al-Din area. They also shared information about hundreds of Syrian fighters moving to fight in Libya.

National Army commander Abdul Salam Abdul Razzaq told Al-Monitor that Syrian fighters are indeed taking part in the Libyan battles, but they went on their own volition and do not represent the National Army or its factions.

He noted that the National Army has denied participating in the Libyan war since no official decision has been issued to send fighters to Libya.

Abdul Razzaq explained that those who went to Libya did so after receiving offers from the Turkish government. “The Turkish offer seems [alluring] given that these people [fighters] had lost their homes and lands and basically everything they had in Syria during the revolution, which forced them to accept this offer for the money,” he said.

"When I go back to Syria after fighting in Libya, I will be able to pay them back and live properly. If I die here, I will be rid of this cruel life."

He continued, “Of course, there is a great responsibility that falls on the National Army leaders. They should have prevented Syrians from participating in the Libyan war. These fighters should have been recruited inside Syria. We could have benefited from them in fighting the regime forces and serving the Syrian revolution, instead of them fighting outside the country. Syrians took up arms to defend themselves and their revolution; they were never up for rent.”

Ahmed Koussa, a former FSA fighter from the Aleppo countryside, is now in Libya fighting alongside the GNA. He told Al-Monitor, “I was out of work back in the Aleppo countryside and if I would ever find a job it would be poorly paid and not enough to cover my living expenses. Money is the main motivation for me coming here. The money will help me improve my family’s living conditions. I have a lot of debts I could not pay. When I go back to Syria after fighting in Libya, I will be able to pay them back and live properly. If I die here, I will be rid of this cruel life.”

Rawan Erkhies, a Libyan humanitarian activist, told Al-Monitor, “The Syrian fighters were exploited due to their urgent need for money. They accepted fighting in the Libyan war in exchange for money. However, it will cost them their lives, and this matter does not serve the interests of any party to the conflict. We hope they will return to their land safely.”

Erkhies added, “Syrian fighters do not constitute a crisis for us since many countries are already involved in Libyan affairs.”

Hamed al-Saleh, another Syrian fighter from the Aleppo countryside who is now in Libya, told Al-Monitor, “Fighting alongside the legitimate GNA in Libya is a moral duty over which one cannot compromise. We defend the Libyans against the militias that seek to destroy Libya. I was motivated to fight in Libya by the salary I will receive. It amounts to $2,000 per month, which is equal to 2 million Syrian pounds. It is a lot of money given the poverty in Syria. If I die, at least my children will have a better life thanks to the money they will get.”

Mohammed Shakeeb Elkhaled, the head of the Syrian National Democratic Movement, an opposition party formed in 2019, told Al-Monitor, “It is a shame that the Syrian youth have turned into hired mercenaries. It is unfortunate that we have turned into a tool for regional and international alignments, and we will pay dearly for that.”

He added, “Poverty and difficulty to put food on the table are not convincing reasons. One cannot sell their soul for money and ruin the FSA’s image, for which thousands of martyrs had to pay.”

Elkhaled noted, “The factions are tools whose decision and will had been stolen. They now work for Turkish interests.”

Basel al-Ghazawi, a Syrian journalist who worked with Orient TV and currently resides in Idlib, told Al-Monitor, “These fighters ought to fight in Syria against the Syrian regime that is killing its people. There is no justification for Syrians fighting foreign wars. If the Syrians’ participation in the Libyan war is ideological and intellectual, then the battles in Syria need to be a priority when it comes down to it. Those who participate in battles only for the money are mere mercenaries.”

Ghazawi added, “Syrian fighters ought to defend their cause and their revolution. The fact that the FSA denied [the reports about] their participation in the Libyan battles is a desperate attempt to contain popular anger, so fighters do not look like mercenaries. The FSA cannot prevent its fighters from participating because it is actually following Turkish orders.”