Why Syrians are joining Turkey in Nagorno-Karabakh clash

Al-Monitor spoke with Syrian opposition fighters who joined the fight in Azerbaijan. Here is what they had to say. 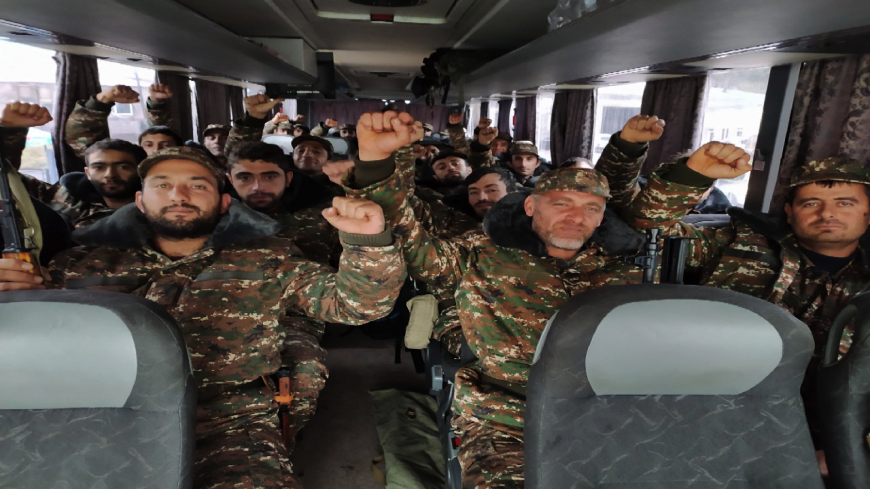 A picture taken on Oct. 6, 2020, shows ethnic Armenian volunteers and reservists riding in a bus on the Armenian territory toward the Karabakh frontline to fight with Azeri troops during the ongoing military conflict over the breakaway Nagorno-Karabakh region. - AFP via Getty Images

IDLIB, Syria — Azerbaijan, Armenia and Turkey have been exchanging accusations about bringing Syrian fighters to Azerbaijan, as clashes have been escalating in recent days following the renewed fighting between the two neighboring countries over the disputed Nagorno-Karabakh area.

Turkey stands by Azerbaijan in its war with Armenia for two reasons, mainly because Azeris belong to the same Turkish ethnicity or are the closest to Turks, and also due to the long-standing hostility between the Turks and Armenians against the background of the conflict between the Ottomans and the Armenians at the beginning of the 20th century and the accusations against Ottomans of committing genocide against Armenians.

For its part, Russia is backing Armenia due to the presence of an Armenian lobby in Russia and the traditional alliance between the Armenians and Russians during the founding of the Soviet Union. Meanwhile, Russia maintains military bases in Armenia.

On Sept. 28, the spokesman for the Azerbaijani Ministry of Defense, Anar Iwazov, said in a press statement that Syrian mercenaries of Armenian origins were found among the bodies of the Armenian forces on the Karabakh front.

On the same day, Sept. 28, Russia’s Interfax news agency quoted Armenia's ambassador to Russia, Vardan Toganyan, as saying that Turkey had transferred about 4,000 fighters from northern Syria to Azerbaijan. Meanwhile, Hikmat Hajiyev, head of the Department of Foreign Policy Affairs of the Azerbaijani Presidential Administration, responded to the Armenian accusations, denying all claims about his country bringing Syrian fighters.

On Oct. 2, Azerbaijani President Ilham Aliyev denied that any Syrian fighters were taking part in the battles on the Artsakh front. Speaking to Al Jazeera, Aliyev said the news reported by Armenia regarding bringing Syrian fighters to Azerbaijan was false.

On Sept. 28, Turkish Defense Minister Hulusi Akar called on Armenia to immediately stop its attacks and withdraw the mercenaries brought in from abroad, while the Azerbaijani Ministry of Defense said that “Syrian mercenaries are fighting in the ranks of the Armenian army during the ongoing clashes on the Artsakh front.”

In this context, Al-Monitor spoke via phone with Syrians who have joined the fight in Azerbaijan.

Khaled Saleh (a pseudonym), 25, from the northern countryside of Aleppo, told Al-Monitor, “I work with the First Corps in the Free Syrian Army (FSA). The living situation in northern Syria and unemployment forced me to go to Libya before, and now I have decided to go to Azerbaijan for $1,500. I never thought that I would ever fight anyone other than the Syrian regime, and I was fighting it for free. But I had to fight in Libya in order to secure my family’s income because we are poor and have nothing except what some humanitarian organizations in northern Syria provide us with.”

Saleh added, “By joining the fight against Armenia through Turkey, I will achieve two goals: The first is getting a financial income in light of the poverty we live in, and the second is to stand by Turkey, which stood by our side in the Syrian regime’s war against us.”

Bilal Hamdan (a pseudonym), 24, who lives in a displaced camp in the northern countryside of Idlib on the Turkish-Syrian border, told Al-Monitor, “I never fought during the Syrian revolution, even though I am against the regime. My cousin is a soldier in the Sultan Murad Division (affiliated with the Turkish-backed Free Syrian Army), and he told me to meet him in Afrin in order to register my name to join the fight in Azerbaijan. So I did and met the commander in charge, who told us that the salary will be between $150 and $2,000, and we would work as guards in oil facilities only. However, when we arrived in Turkey, we were transported by air to Azerbaijan, to an area where I could hear bombing sounds. It then became clear to me that we were in a war zone instead of an oil facility. I agreed to fight because of the tempting salary. I am the sole breadwinner in my family of eight, my father is deceased and we have no one to support us.”

In this context, Ahmad Hassan, a Syrian journalist residing in Turkey, told Al-Monitor, “Yes, some Syrians did go (to Azerbaijan), but they were only a few hundred. Some faction leaders misled them and claimed that they were going through official contracts, but it was not the case. They rather went through Turkish security companies that have projects in Azerbaijan with gas, oil and contracting companies. These Syrians only left for financial reasons and with the aim of working in security companies. When they first registered, no military operations were taking place there (in Artsakh).”

He added, “Those who are officially sent by Turkey are Syrians who hold Turkish citizenship and belong to the FSA. Meanwhile, those (Syrians) who were sent unofficially are members of groups that seek the return to the Turkish state, and most are Turkmen; they have no official cover and they are not given any travel documents. This is why they use illegal means through security companies.”

Hassan noted, “The participation (of Syrian fighters) does not affect the Syrian file, where the US, Turkey and Russia are heavily involved through military forces allowing them to act individually, while the Syrian parties have remained on the sidelines. Russia is adopting the same measures (when it comes to recruiting Syrian fighters to Azerbaijan) through security companies. The issue in Azerbaijan is not linked to the one in Syria; each region has its own nature, alliances and expectations.”

FSA leader Capt. Abdul Salam Abdul Razzaq, who resides in the countryside of Idlib, told Al-Monitor, “There is a strategic alliance imposed by geography, history, interests, and common objectives between the Syrian and Turkish people. This is why the Turkish leadership and the FSA military and civil institutions are in alliance. I do not get what this fuss is about; FSA factions will fight alongside our Turkish friend anywhere because Turkey is fighting alongside us in Syria. But so far, there is no intention to (officially) participate in the battles of the Caucasus or any other battle, even if there are Syrians there.”

He added, “All of the region’s issues are politically and militarily interconnected, and Russia is losing its mind over the emergence of forces that will prevent it from committing more killings in Syria. These forces stand with oppressed peoples and even countries. I believe it is in the interest of the Syrian revolution to take away Russia’s areas of influence and break its might everywhere.”