Western officials say that given the Islamic State threat, it is only a matter of time before their governments initiate formal ties with the Kurdistan Workers Party and the Democratic Union Party, despite objections from Turkey. 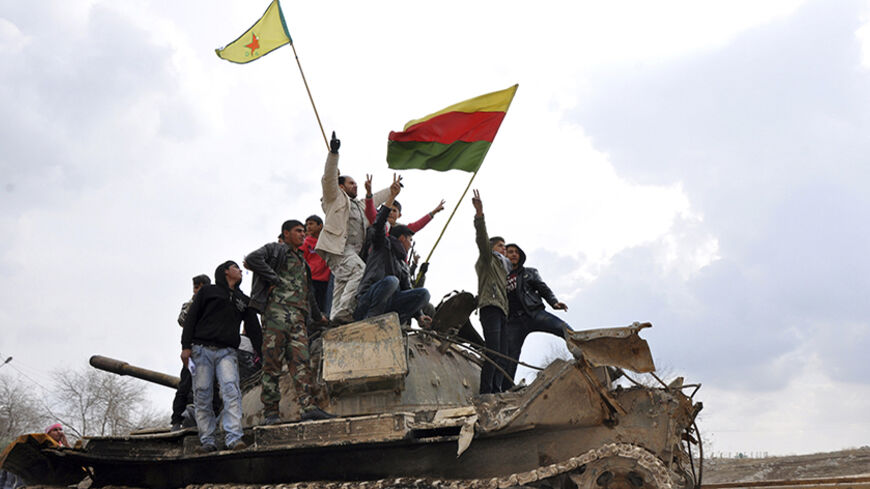 Civilians and members of the Kurdish People's Protection Units (YPG) gesture and raise flags atop a tank that belonged to fighters from the Islamic State of Iraq in al-Manajeer village of Ras al-Ain countryside, Jan. 28, 2014. - REUTERS/Rodi Said

As the United States presses ahead with assembling an international coalition to “degrade and destroy” the Islamic State (IS), two potentially critical players are coming to the fore: the Kurdistan Workers Party (PKK) and its Syrian Kurdish franchise, the People’s Protection Units (YPG). Their ascent has been amply chronicled by Al-Monitor columnist Kadri Gursel and Al-Monitor contributor Mohamed A. Salih.

The PKK and YPG have proven to be the most effective forces in the battle against IS both in Iraq and in Syria, never so much as when they shepherded tens of thousands of Yazidi Kurds marooned on Mount Sinjar, in northwestern Iraq, to safety and helped Iraqi peshmerga retake the town of Makhmour.

The PKK and YPG are pro-secular, if quasi Marxist, in ideology. The latter has never targeted the West, and although the PKK has been fighting Turkey, a NATO member, on and off since 1984 for Kurdish self-rule, a cease-fire declared in March 2013 remains in effect. Moreover, both groups claim they are eager to cooperate with the West. So, what better local partners for the anti-jihadist alliance than them? This question is being pondered by European Union (EU) governments and US officials, senior Western officials speaking on condition of anonymity told Al-Monitor. All stressed, however, that for now the debate was, as one put it, "of a purely 'what if' nature."

“The problem is Turkey,” explained one of the officials, echoing concerns of a likely backlash from the Turkish government. Turkey branded the PKK as “terrorists,” and the label was adopted by the EU and Washington. The PKK is on both their lists of officially designated terrorist groups and has been accused of money laundering and drug trafficking. IS’ dizzying gains, however, have dramatically altered the security landscape across Syria and Iraq. “You’ve got to pick your poison. It's either [IS] or the PKK,” the same official stated.

Turkey has not helped matters by refusing to join the anti-IS front, saying its contribution would be limited to humanitarian missions. IS continues to hold 49 workers from the Turkish Consulate in Mosul hostage, which is the main stated reason for its reticence. After all, Turkey has been holding direct peace talks with the imprisoned PKK leader, Abdullah Ocalan, for at least five years. Thus, US and European policymakers who are pushing for a dialogue with the PKK/YPG argue that Turkey can hardly complain about Western engagement with them when it is talking to the rebels itself.

Ankara's peace negotiations with the PKK were effectively formalized with legislation rammed through parliament by the ruling Justice and Development Party (AKP) earlier this year. In a further dramatic shift, AKP officials say they are finally ready to talk to PKK commanders in Iraqi Kurdistan. All of this ought to make it easier for Western governments to delist the PKK, but Turkey argues that until a lasting peace agreement is struck with the rebels, any Western moves to legitimize the group would weaken the government’s hand.

Engagement with the PKK and the YPG’s political arm, the Democratic Union Party (PYD), is already being advocated by some influential think tanks in Washington. Michael Werz, a senior fellow at the Center for American Progress, co-authored a recent report calling on the Obama administration “to deal with Kurdish organizations that are helping define the reality on the ground [in Syria], such as the militant Democratic Union Party, or PYD.” Unlike Turkish officials, Werz believes that dangling the carrot of delisting can help move the peace talks forward.

Another part of the problem is Turkey's insistence that the rebels surrender their arms and disband as part of any final deal. This is utterly unrealistic given the spiraling IS threat. If anything, the PKK is looking to expand its forces and upgrade its weapons. Indeed, it is the PKK’s prowess on the battlefield, rather than its peace overtures to Turkey, that is propelling it to international legitimacy.

Marietje Schaake, an EU parliamentarian who closely follows Turkish affairs, argues against such expediency. “The Middle East has suffered enough from ‘your enemy’s enemy is your friend’ type of thinking, which has often had disastrous consequences. Instead, the IS threat should create a sense of urgency for a negotiated solution [to Turkey’s Kurdish] problem,” Schaake told Al-Monitor.

Another hurdle to Western dialogue with the PKK and the YPG is the Iraqi Kurds. Massoud Barzani, head of the Kurdistan Democratic Party (KDP), sees himself as the true leader of the world's 40 million or so Kurds and resents any suggestions that Ocalan and the PKK might have a similar claim. His peshmerga, however, put up no resistance and fled when IS forces stormed Sinjar in August, casting them in an unfavorable light compared with the battle-hardened PKK/YPG.

PKK sources who asked not to be identified confirmed that they have already had informal contact with “junior level” US Army officials and CIA operatives on Mount Sinjar. “These interactions would be unthinkable absent the [IS] threat,” Werz told Al-Monitor. “That said, the US government is very risk averse and will proceed cautiously. Many officials are afraid of jeopardizing their careers by being seen to cooperate with anyone linked to the PKK,” he said. This and unremitting Turkish pressure may explain why the United States continues to deny a visa to Salih Muslim, the PYD co-chair, and shuns official contact with him.

Undaunted, the PKK and the PYD/YPG are continuing their battle for global acceptance. In a move apparently calculated to provide the Obama administration with a fig leaf for future cooperation, the YPG recently sealed an anti-IS alliance with various groups affiliated with the Free Syrian Army (FSA), founding what they call the Joint Action Center. Its purported goal is to liberate all territories held by IS in Syria. Barzan Iso, a Syrian Kurdish activist, explained to Al-Monitor, “We cannot fight IS alone. We need to join hands with the Arabs.”

It remains unclear how this sits with the YPG’s policy of nonconfrontation with the regime of Bashar al-Assad. YPG sources confirm that they have already begun training FSA-linked fighters from Liwa al-Tawhid, Shams Shamal and Liwa al-Siwar al-Raka, among others, in and around the town of Azaz, a logistical hub for weapons and other materiel flowing to so-called moderate rebels vetted by the CIA. The end goal for the YPG is to be part of the fresh batch of moderates the Obama administration says it is planning to arm and train to fight IS.

On June 5 and July 5, the PYD/YPG signed three “deeds of commitment” with Geneva Call, a nonpartisan Swiss-based nongovernmental organization dedicated to promoting respect by what it calls armed nonstate actors (ANSAs) for “international humanitarian norms in armed conflict.” Under the terms of the agreement, the YPG pledged to ban anti-personnel mines, work against gender discrimination and sexual violence and not use children under the age of 18 to fight in its ranks. By July, the group had demobilized 149 child soldiers. Geneva Call has wrested similar pledges from the PKK and its armed unit, the People's Defense Force.

Though there have been alleged violations of the accords, Anki Sjoeberg, program director for Geneva Call, told Al-Monitor, “Geneva Call has found that both the PKK/HPG and the PYD/YPG have proven a willingness to implement them.” She further stated, “We have also worked with both organizations on the respect of international humanitarian law, and they did show a keen interest in learning more about international standards and practices.”

Human Rights Watch (HRW), the New York-based rights advocacy group, had a similarly favorable experience with the PYD/YPG. When HRW published a report cataloguing alleged rights abuses by the PYD/YPG, the Syrian Kurds’ reaction was unexpectedly measured. While they claimed there were “inaccuracies” in the report, YPG spokesman Redur Xelil acknowledged in a tweet that they had to do “a better job.” Emma Sinclair-Webb, HRW’s senior Turkey researcher, told Al-Monitor, “We were encouraged by their response.”

Western officials, meanwhile, predict that it is only a matter of time before their governments initiate formal ties if not with the PKK then certainly with the PYD and the YPG, because the latter two outfits are not on a terrorist list. Nihat Ali Ozcan, a Turkish security analyst who focuses on the Kurds, reckons that Turkey may well ditch its demand that the Syrian Kurds take up arms against the Assad regime as a condition for dialogue and join hands with them, albeit tacitly, against IS as well. “It's an open secret that the PKK and the YPG are branches of the same tree, but under the circumstances, Turkey will likely resort to pragmatism and treat them differently, at least until the IS threat subsides,” Ozcan told Al-Monitor.