Jordan has moved to stifle free speech, targeting Islamist and secular activists alike and reneging on promises of reform. 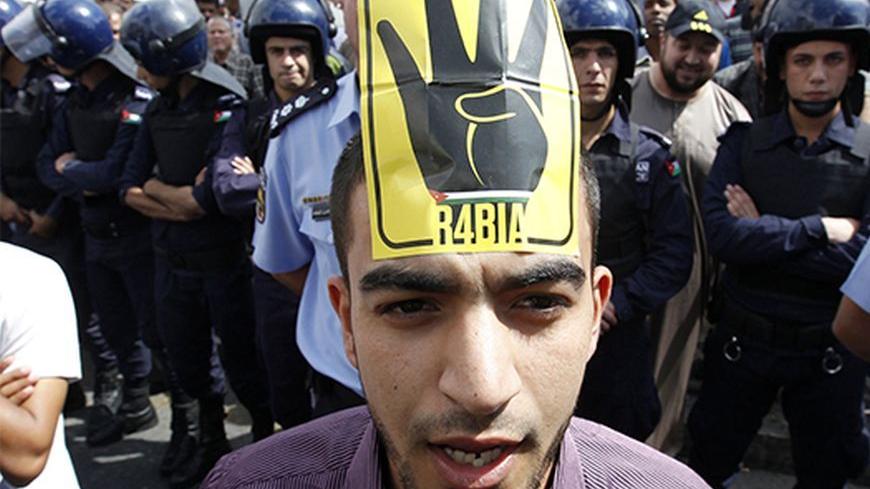 A supporter of Jordan's opposition parties wears a sign of the four-fingered salute on a yellow background, which represents those who were killed in Cairo's al-Rabia Square in Egypt, Amman, Oct. 4, 2013. - REUTERS/Muhammad Hamed
October 25, 2013

AMMAN, Jordan – On Sep. 27, three Jordanians were arrested for putting up posters of a black hand with four fingers raised against a yellow background. The hand symbolizes R4BIA, a solidarity movement in support of the hundreds of backers of deposed Egyptian president Mohammed Morsi who were killed outside Cairo’s Rabia al-Adawiya Mosque in August by security forces.

Morsi’s fall in Egypt came at a moment of weakness for the Muslim Brotherhood in Jordan, where Islamists are the main political opposition. The R4BIA arrests represent just one aspect of a broader crackdown on dissent, Islamist and secular alike, especially if linked to neighboring countries.

King Abdullah, who once proclaimed that “the sky is the limit” of free expression in Jordan, has been praised for introducing constitutional changes and maintaining order through the tumult of the Arab Spring, but escalating regional turmoil has set the Hashemite kingdom on edge and set back the clock on reform.

On Sept. 1, Prime Minister Abdullah Ensour announced that Abdullah had made a “big and courageous reform step.” The SSC, essentially a military court, will be limited to jurisdiction over treason, espionage, terrorism, drugs and money counterfeiting, he said. All other crimes will go to a civilian court, as stipulated in the constitution.

Within a month of Ensour’s speech, 11 civilian activists were arrested for trial before the SSC, according to figures compiled by the Jordanian activist group al-Hirak and shared via email. Human Rights Watch reports that the SSC prosecutor has charged at least 70 protestors since 2011, mostly with offenses of “subverting the political regime” or “insulting the majesty.” Two Jordanian activists recently fled SSC prosecution and sought political asylum — a new phenomenon in Jordan — in Turkey and Sweden.

The Jordanian government continues to call itself a beacon of progress in the region. “Jordan is a role model within the Middle East area when it comes to reform,” said Minister of State for Media Affairs Mohammad Momani in an email interview. When asked to respond to criticism that Jordan is using stability as an excuse to repress human rights and freedoms, Momani replied, “The current situation within the area was a vital cause to accelerate the reform process rather than delaying the reform process.”

Evidence of this acceleration is scarce. “Jordan’s new constitution provides wonderful guarantees,” Adam Coogle, a Middle East researcher at Human Rights Watch, said by phone. “But its penal code regulations remain in direct contradiction to it.” Despite almost three years of royal rhetoric on reform, Coogle said, the penal code has yet to change.

Official control has also tightened on free speech. The government blocked more than 250 news sites in June, using recent amendments to the Press and Publications Law that media watchdogs say amount to censorship.

Abdulkhadir al-Khatib, the defense attorney for the R4BIA protesters, said in an interview that there is “no serious will to reform the law” in spite of official claims. The R4BIA arrests are a warning to Jordanian Islamists, he asserted. “What happened is so clearly against free expression and human rights,” Khatib said. “This is not a legal charge at all. It’s a political message to the Islamic movement, saying, ‘See what happened in Egypt? We can do this now.’ It’s a show of power.”

Meanwhile, Abdullah received Adly Mansour, Egypt’s interim president, in Amman on Oct. 8, just days after another clash between security forces and Morsi supporters left up to 57 dead and almost 400 wounded in Cairo. The king, the first head of state to visit Egypt after the military takeover in July, urged Egyptians to make choices that “enhance their national unity, stability and security.”

Such talk is familiar to activists like Leen Kayyaht, a human rights lawyer, who says authorities use instability to justify a “security mentality” in Jordan. “We have refugees and revolutions, regional and economic conditions,” Kayyaht said in an interview. “They say, ‘Do you want security or freedom of expression? Do you want to see your house safe from bombing or do you want freedom of assembly?’ When you construct a choice like this, people start to feel fear.”

Kayyaht is a member of the Jordanian Youth Movement, whose protests last November denounced Abdullah as corrupt and called for regime change. A year later, they maintain a social media presence but are largely defunct.

“There are protests, but people don’t feel like they are effective,” Kayyaht said. According to her, the average Jordanian is too burdened with daily financial struggles to speak up. “It’s a matter of priority, of feeling safe,” Kayyaht asserted. “People have issues like, how can they find good insurance? How to have a home? How to deal with rising prices? These problems are more important than things like free speech.”

Alice Su is a journalist based in Amman, Jordan. On Twitter: @aliceysu