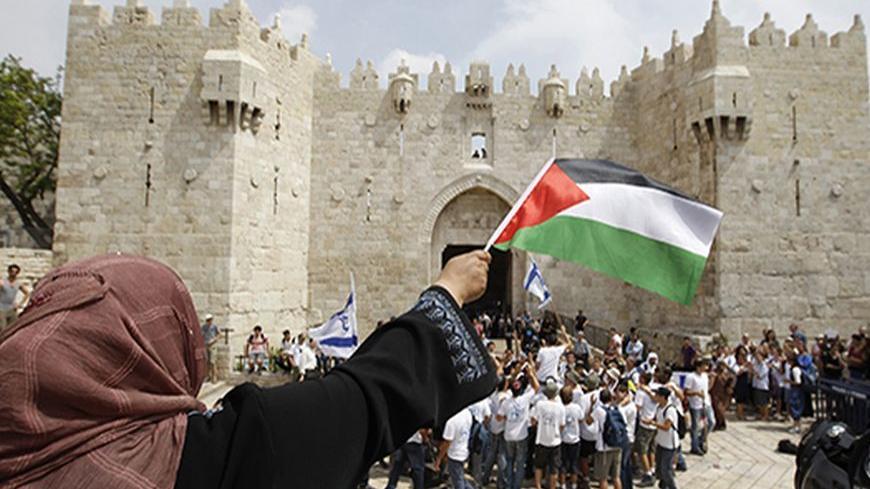 Municipal elections in most countries are not a big deal. But the Jerusalem municipal elections are a big deal for Palestinians, who have boycotted every election held in the city since 1967. Ever since the Israelis occupied east Jerusalem and unilaterally declared that the city's two sides are now a “united city,” Palestinians have refused to field candidates or vote for the city council and mayor. This has resulted in Jewish Israelis continuously gaining every seat on the council of a city with between 250,000 to 350,000, depending on whether Palestinian Jerusalemites on the other side of the wall are included in the count.

On Oct. 8, the Arab affairs department of the Palestine Liberation Organization (PLO) issued a statement calling on east Jerusalem residents not to vote in the elections scheduled for Oct. 22. The PLO said the municipality supports settlements in east Jerusalem and is turning it into a Jewish city, “which is a national and political issue and not an issue of providing services.”

“Participating in these elections will be considered normalization with the Israeli occupation authority, which means legitimizing the annexation of Jerusalem,” read the statement.

The call on Palestinians not to participate will certainly be heeded. In no previous elections have Palestinians in Jerusalem participated with numbers more than single digits.

Normally, Palestinians living under occupation would not even be qualified to run in any Israeli-run city elections, but in Jerusalem where Israeli law applies, Palestinian holders of permanent residency cards can vote for city council even though they would need to become citizens to vote for the Israeli Knesset elections.

In similar struggles around the world, local communities have often chosen to avoid or boycott national general elections while agreeing to participate in local elections, which have less of a political connotation and more of a service orientation. Islamist movements in Israel and Jordan, for example, have participated in local polls but boycotted national ones.

But in Jerusalem, everything from picking up garbage to the sewage system to schools and hospitals is political. Discrimination in planning, building and land expropriation has been thoroughly investigated and documented by human rights organizations.

The issue of elections in Jerusalem has perplexed Palestinian politicians and public activists. On the one hand, there is unanimous agreement that participating in the elections by running a list of candidates or by a considerable number of people voting would be seen as legitimizing the unilateral Israeli annexation of the holy city. On the other hand, 46 years of boycotts have allowed Israeli Jewish mayors and council members to have a free hand in spending the city’s budgets, approving city plans and making a significant impact in the city's life.

Palestinians insist that the Israeli policy in Jerusalem is clearly meant to keep Palestinians a small minority in the city. Israeli planning policy has choked housing in Arab neighborhoods, forcing many to build homes without a license or leave the city. Once an unlicensed home is built and discovered, Israeli demolition orders are issued. Law in Israel requires the owner of an illegally built house to demolish it himself or risk paying a further fine in addition to the cost of the destruction of their homes.

In 1988, respected Palestinian newspaper editor Hanna Siniora decided he wanted to field a list of Palestinian nationalists for the city’s municipality. The timing was bad as the Palestinian areas were witnessing the first ever uprising. As a result of the intifada and the anger of Palestinians against the status quo, the idea was short-lived. Other factors also added to the pressure on Siniora. Unknown assailants torched his car outside his Beit Hanina home and leaflets denounced his call, resulting in the death of the idea. Ironically, it was Jerusalem that ignited the second intifada.

Palestinians pay a high city tax called arnona. Palestinian Jerusalemites who do not pay the tax or who choose to live outside the city limits risk losing their residency and right to live in the city. Israeli policy to limit Palestinian residency in the city of Jerusalem is seen by many as a form of ethnic cleansing. Some right-wing Israelis call their own policies toward Jerusalemites the “transfer policy,” in reference to their attempts to use administrative acts to cause Palestinians to "transfer" outside Jerusalem and also outside the Palestinian areas.

The status of Jerusalem has been approved in the current elections as one of the permanent status issues that negotiators are expected to tackle within the allotted nine-month period of peace talks. Many experts feel that the issue of Jerusalem is probably the hardest nut to crack in the complicated Palestinian-Israeli conflict.