Amid mounting questions on the efficiency of Iraq’s security apparatus, the Interior Ministry proves unable to provide even rough statistics on the daily bombings that afflict the country. 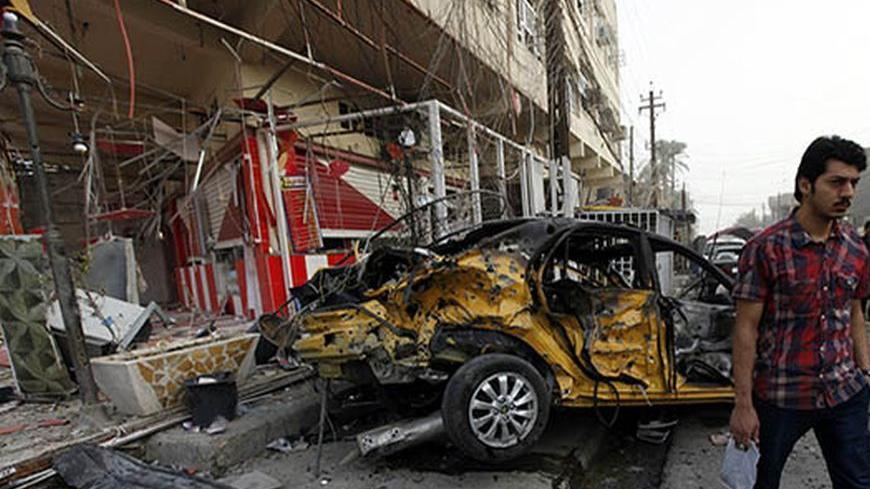 A man walks past the site of a car bomb attack outside an ice cream parlor in the Al-Mashtal district in Baghdad, Oct. 19, 2013. - REUTERS/Thaier Al-Sudani

There are no official Iraqi statistics about the number of bomb-rigged cars that have exploded since the beginning of this year.

It all seems very confusing when you ask the Iraqi Interior Ministry for a detailed count of the number of car bombs, and receive a reply from the ministry’s spokesman that “the number is confidential and obtaining it necessitates a long list of approvals.”

Things are no different at the UN mission in Iraq, which told Al-Monitor that it did not keep such statistics.

The lack of official figures does not mean that it is impossible to obtain fairly accurate numbers by reviewing the succession of events on the Iraqi scene since the beginning of the year. Such a review leads us to a number between 200 and 225 car bombs that have exploded in the faces of Iraqi citizens, claiming thousands of victims in the past 10 months alone.

The number of cars driven by suicide bombers compared with cars remotely detonated is unclear; still, the percentage that are suicide bombings could be close to 50%.

The attacks seem to be primarily concentrated in the cities of Baghdad and Diyala provinces. They extend southward toward Basra, Nasiriyah, Karbala, Babel and Diwaniyah, westward toward Anbar, and northward toward Kirkuk, Saladin and Mosul, with Erbil lately joining the list of targeted cities with two remotely detonated car bombings and three suicide blasts.

Available figures do not offer clear answers to any researcher looking into the security situation in Iraq. They lack information about the types of cars that exploded, their ownership, importation methods, models, colors, or the places where they were booby-trapped and the types of explosives used.

At first glance, such details seem unimportant in a country of more than 600,000 cars affixed with temporary license plates, whose owners are considered unknown. This seems particularly true considering that some had been sold multiple times before being used in attacks.

Of course, killing is not limited to car bombs; the use of adhesive explosive devices and assassinations is also prevalent.

But the 200 or more car bombings create question marks about security agencies’ inability to realistically put an end to the escalating and worrisome cycle of explosions.

There is some political talk about foreign entities being responsible for the violence, but the evidence for this is not clear.

What is clear is that all the complicated measures adopted, including trying to identify the cars on the road and dividing them into those with plates ending with an even or odd number, have not helped in understanding the blueprint for violence in Iraq, or the method used to transport and detonate the booby-trapped vehicles.

Official Iraqi insistence on labeling the security collapse as a “breach” is pure deception that must not be allowed to pass. Describing the Erbil bombing, or other sporadic attacks against safe cities such as Najaf or Amara, as “security breaches” is understandable. But such a characterization cannot apply to the remaining cities, particularly Baghdad, which is targeted on a nearly daily basis.

The 200 car bombs, thousands of explosive devices, and daily murders caused by handguns must bring about a new type of honest, clear and detailed discussion, based on truthfulness and not deceit.

In the absence of such sincerity, it is futile to ask the political and cultural elites, as well as the Iraqi populace, to defend security officers and support their efforts, as the prime minister called for in his weekly address on Oct. 10, 2013.

No one wants to doubt Iraq’s security and military forces. Today, they are the only protective umbrella that Iraq can wield in its attempts to shield itself from the wanton killing of its people. But, in return, Iraqi security agencies must be forthcoming in explaining the country’s current plight. They must be clear in their assessment of Iraq’s present situation. In the absence of credibility, Iraq can never surmount its predicament or overcome its crisis.