Iraqi politicians treat security as an electoral matter, while security disintegrates throughout the country. 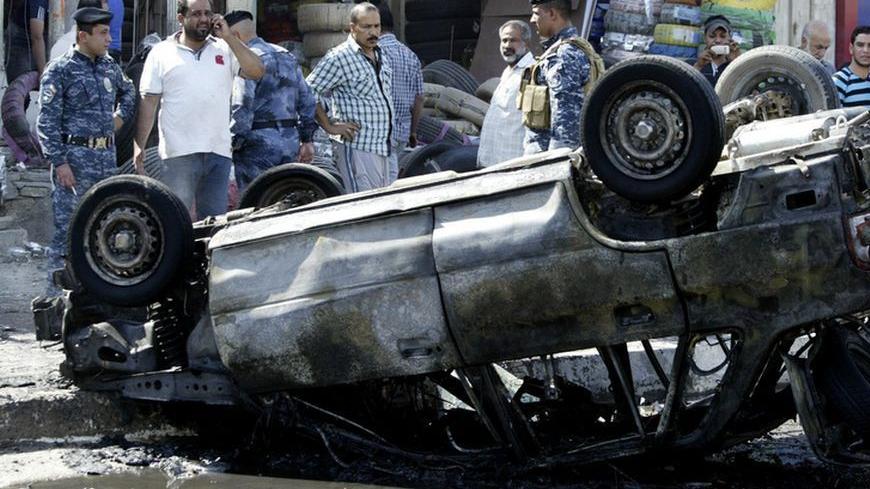 Iraqi security forces and people stand at the site of a car bomb attack in Basra, 420 kilometers (261 miles) southeast of Baghdad, Oct. 13, 2013. A series of bombs killed at least 10 people in mostly Shiite provinces of Iraq on Oct. 13 ahead of the Muslim feast of Eid al-Adha, police and medical sources said. - REUTERS/Essam Al-Sudani

There comes a time when we must pause and re-evaluate all that has transpired. Iraq, in its entirety has been transformed into a ballot box. There remain no moral or human deterrents that prevent the conversion of Iraqi life into an electoral issue, into a win or a loss, a victory or a defeat.

But wait — this is no democracy. Nations possess rules and historic moral frameworks that prevent them from gambling with the security, future, unity and harmony of their societies. In Iraq, however, things are completely different. Daily scenes of bloodshed, destruction and threats to people’s lives leave no doubt that the ongoing events all figure into mere electoral gambling.

Contenders in Iraq are not competing for the chairmanship of the country’s board of directors. In reality, they hope to hijack it in its entirety, making elections an existential threat that threaten to blow up in the faces of everyone.

This characterization might seem perplexing, unless we come to understand that the Iraqi state still lacks the majority of necessary regulations to  govern its functions. It must also be understood that it is still deficient in political, constitutional and partisan traditions and that is has not yet emerged from the shadow of a deep-rooted dictatorial legacy. It has failed for the last 10 years to transform elections into a competition bound by even a modicum of honor.

On the subject of honor, it would seem that the successive events and series of security catastrophes have led people to forget about the “honor”-bound document signed by senior Iraqi leaders in the hope of putting an end to the extremely dangerous security and sectarian difficulties.

No one seemed to remember, nearly two months after that document was signed, that security cannot be achieved through a document signing session, without mechanisms in place that can be effectively implemented on the ground.

Iraqi politicians have certainly not forgotten. The electoral campaigning that actually begins in Iraq more than a year prior to any elections prevents the resolution of the security crisis and stands in the way of taking the necessary steps needed to achieve social peace.

Why is this? The answer is that all competing factions consider any progress on the security, political, or service levels to be an electoral card that must be exploited in Iraq. Supporters of the regime view progress as an effective card to be played during electoral campaigns. Meanwhile, their opponents strive to prevent such progress from being attained prior to elections, because they know that it would be exploited by others at their expense.

It is a vicious and extremely complex cycle of death. It cannot be escaped without a return to the main principle upon which states are established: to Jean-Jacques Rousseau and his The Social Contract, to a redefinition of the Iraqi state’s central mission to safeguard the security, rights, freedoms, and welfare of its people. States must be tools by which these “contracts” are implemented. It is wrong for the populace, and Iraqi politicians in particular, to erroneously believe that the term “government” equates to “state”.

Security must not be made into an electoral issue. Security and military forces must not be transformed into a tool used by governments or parties. They are the people’s right arm and their protector.

It feels strange to write about such obvious matters, as it is hard to understand and accept what is transpiring in Iraq without delving into such fundamental principles. Yes, it is true that there are people in Iraq who think that the government is the eternal owner of the state, that the army is owned by the party, that a collapse of security is an opportunity to break the back of political opponents, and that progress on the security  level is a means by which parties can be harmed or even destroyed.

In a country where 30 car bombs explode every week, where the dead and wounded are but mere statistics, we are bound by duty to go back to the fundamentals. Those fundamentals, misunderstood in Iraq, teach us that the state is not the government, that the government is not confined to the party, and that the party is not one single individual.