Mustafa al-Kadhimi asks how terrorists can operate with such impunity throughout Iraq, given that al-Qaeda is supposedly "besieged," and given the presence of numerous checkpoints throughout the country. 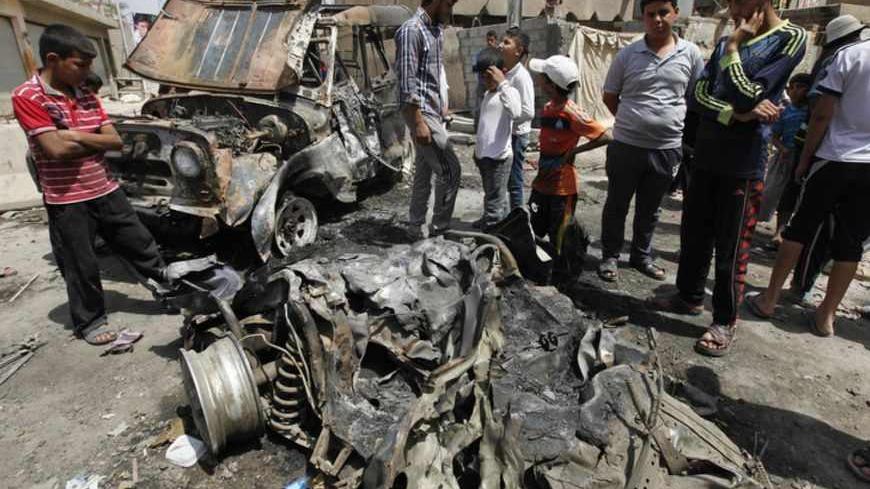 Residents gather at the site of a car bomb attack in the Kamaliya district in Baghdad, April 15, 2013. - REUTERS/Mohammed Ameen

These numbers are no longer shocking in Iraq or anywhere else when reading about Iraq. For the figures that the media circulated last Sunday [April 14] about the carnage that befell Baghdad, Babil, Dhi Qar, Saladin, Anbar, Kirkuk, Diyala and Mosul, all at once, seem to be copied from massacres from the recent and distant past. They are similar in execution and in the size of their losses, even in their targets and the faction that claimed responsiblity: al-Qaeda. They are also comparable in the security authorities’ inability to thwart them.

The latest attacks carried with them three new developments:

First: They targeted Dhi Qar, which was considered a relatively safe city.

Second: The attack successfully targeted the entrance to Baghdad airport, one of the most important sites on a strategic and security level.

Third: The attacks occurred at a time when Iraqi security forces were imposing strict and unprecedented measures on Iraqi cities, particularly Baghdad, in preparation for the local elections that are scheduled to take place on April 20.

The first development signified that al-Qaeda, which will probably have claimed responsiblity for the operation by the time this article goes to press, sent a very clear message that it was capable of reaching any target it wanted to strike. In this case, that target was a city in the extreme southern and Shiite dominated part of the country that seldom falls victim to major security attacks.

The message brings to the forefront the true nature of the support environment through which al-Qaeda operates. It raises questions of whether it is really centered in the Sunni part of Iraq, or rather spread in different environments where it infiltrates and exploits security weaknesses wherever they may be.

The significance of the second development, where a car bomb successfully reached Baghdad airport, lies in the fact that it had to cross at least three main checkpoints without being detected. And if the car originated far from the airport or from another province, as security communiqués seem to indicate, then it would have had to traverse at least 20 checkpoints to reach its target at the entrance to the airport!

This fact is appalling, and invites the same question that has followed every other bombing in Iraq: How can an organization which is supposedly “besieged,” as security reports indicate, whose members and leaders are apprehended by the dozens every day, execute all these attacks, simultaneously in wide-ranging areas of Iraq?

This question, in turn, leads to the third previously mentioned point as to why the security forces never were able to offer any justification for the lapses in security, and never announced the discovery of any facts, except to say, a day or hours even after each bomb attack, that the perpetrators had been apprehended.

It thus is only logical for the inhabitants of Baghdad, whose city was rocked by seven simultaneous car bomb explosions, and more than 40 such explosions since the beginning of the year, to ask: Why are the Iraqi security forces transforming our lives into a daily hell of waiting for hours at checkpoints that conduct perfunctory half-hearted searches on blocked-off streets, amid useless fortifications?

The people are justified in asking; for life in Baghdad during the past three months has grown harder than it ever was in the past four years, as a result of the strict security measures and military deployments to neighborhoods and squares. The inhabitants are within their rights to expect that their patience be rewarded and that they be shielded from all the recurrent attacks.

The performance of Iraqi security forces has become the subject of ever increasing question marks pertaining to their leadership’s caliber and tactics , as well as their publicized plans. The fact is, it has become necessary to question the truth surrounding the security forces’ apprehension of over 500 of al-Qaeda’s members and leaders since the beginning of the year!