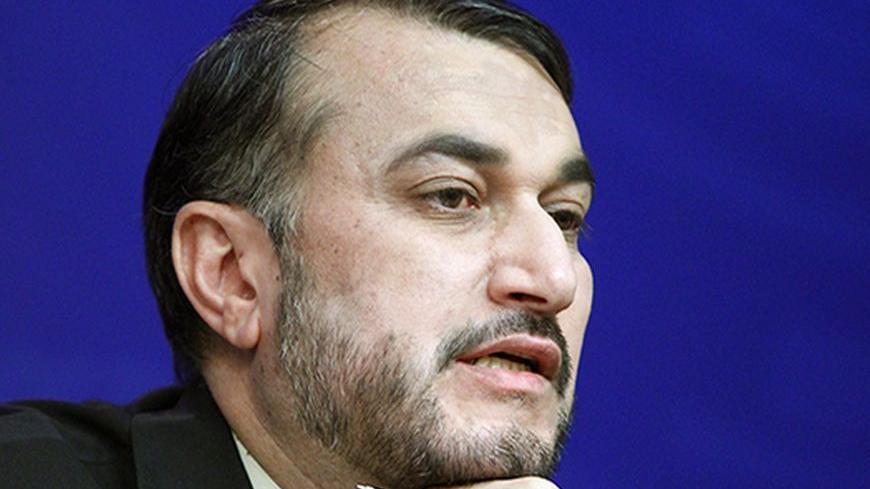 TEHRAN, Iran — Getting to know Iran is a difficult task that might take a foreigner dozens of years without going anywhere. As a former Arab diplomat who served as his country’s ambassador to Tehran once told me, someone needs 20 years until he or she can dare say, "I might know."

This diplomat and his colleagues were in direct connection with Iran’s Foreign Ministry, the country’s bridge to the world, the place where the “built-in” diplomacy of the Iranian people is well reflected.

In a huge complex south of Tehran stands Iran’s diplomacy headquarters. The Foreign Ministry, immersed in history, tells without a single word the history of the empire that became the Islamic Republic of Iran.

On the first floor of building No. 1, I met Hussein Amir Abdollahian, the country’s undersecretary for Arab and African Affairs. Abdollahian, who holds a doctorate in international relations from the University of Tehran, is the man taking care of Iran’s interests in countries such as  Syria, Iraq, Lebanon, Palestine, Yemen, Egypt, Bahrain and many more, an indication that he knows a lot of answers to many of our questions.

I started my questions with one about the latest news, UN envoy to Syria Lakhdar Brahimi’s visit to Tehran.

“We had several common points with Mr. Brahimi; we both agree there’s no military solution for the crisis in Syria,” said Abdollahian, adding: “He discussed with us the possibility of reaching a prompt cease-fire and bring the Syrians together to a round table, regardless of whether it is Geneva II or any other political agreement that can help the Syrians determine their future by themselves.” Abdollahian said Iran told the peace broker that no country has the right to decide for the Syrians. “We all have to cooperate together to rid the Syrians from this war, and at the same time help them start a serious dialogue before going to election, a real election with international observers.”

The Iranian diplomat, who served years ago as an ambassador to Bahrain and head of the Iraqi desk at the Foreign Ministry, explained that most of the countries involved in the Syrian crisis believe in having a political solution. “Before, most of the countries believed in military action; today, there are only two or three that adopt this choice, while most of the other states in the region and abroad stress on reaching a political settlement.” Abdollahian gave the Iranian recipe for a solution in Syria: “We believe the US-Russian dialogue is very important and can help. Geneva II can be useful, too. A regional dialogue between Iran, Saudi Arabia, Turkey and Egypt over the future of Syria in accordance with the Syrian dialogue will enhance the possibilities of reaching a deal, but the most important point of all is putting an end to violence and stopping militants and arms from crossing into Syria.”

I interrupted him, saying that whatever the road map is, and if the whole world agreed on a solution, if Iran supports President Bashar al-Assad and Saudi Arabia backs the opposition didn’t reach an agreement, nothing will change.

Abdollahian took it an opportunity to explain his country’s reasons for backing Assad: “We support Assad and his political solution and his reforms. We support a Syria that is a member of the resistance bloc. We support the Syrian people and the Syrian opposition that believes in the political approach.” He added, "Assad is the legal president of Syria, until the next election, and when the election takes place the Syrians will decide.” Abdollahian emphasized that what’s going on in Syria is a “terrorist war,” adding,  “Those who back the terrorists are responsible for their crimes.”

He recalled telling Western delegations: “Al-Qaeda was raised up in Afghanistan, but the 9/11 terrorist attacks took place in New York; you can’t bring all these radical groups to Syria and think that the world will be safe.” He then explained his country’s vision for relations with Saudi Arabia: “As we said before, coordination between Riyadh and Tehran can be very effective to confront bad phenomena such as radicalism, sectarianism and terrorism. We can make use of our strengths to enhance peace and security in the region.”

On relations with Turkey and Qatar, Abdollahian told me that points of view regarding the Syrian crisis are getting closer to Tehran’s, and that Qatar and Turkey are dealing with the Syrian crisis in a more realistic way, hoping that this will be for the region’s best.

What about Iran’s relations with Hamas that deteriorated amid the Syrian crisis, I asked him, and are we going to see any Hamas officials in Tehran any soon? “Hamas’ officials on all levels are still visiting Tehran, we received Mr. Ismail Haniyeh and Mr. Khaled Meshaal, and it’s possible to see them here at any time.” Abdollahian stressed that relations with Hamas is strong, and that while the Syrian crisis might have sparked some thinking, “This won’t affect strategic relations between Hamas, the resistance groups in Palestine and the Islamic Republic; Hamas [members] are our brothers and we will continue to support them, and Palestine will continue to be our red line.”

My last question was on Iran’s relations with Egypt after the toppling of the Muslim Brotherhood. “Our relations with the interim Egyptian government are good, and on all levels.” He paused for a while, and then explained that from Iran’s point of view, “The Muslim Brotherhood and Mr. Morsi didn’t take in consideration many facts in Egypt; there should have a role for other active currents and parties in the government. The whole phase was mismanaged and that led to what happened; we believe Egypt should make a quick comeback through elections and democracy.”

Ali Hashem is an Arab journalist serving as Al Mayadeen news network's chief correspondent. Until March 2012, he was Al Jazeera's war correspondent, and prior to that he was a senior journalist at the BBC. On Twitter: @alihashem_tv