Iranian official says US, all countries have 'duty' to confront terror in Syria

In an exclusive interview with Al-Monitor, Iranian Deputy Foreign Minister for Arab and African Affairs Hossein Amir-Abdollahian said Iran is "happy" with the Palestinian unity agreement and that, with regard to the next prime minister of Iraq, "whoever the Iraqis agree on will enjoy the full support of the Islamic Republic of Iran." 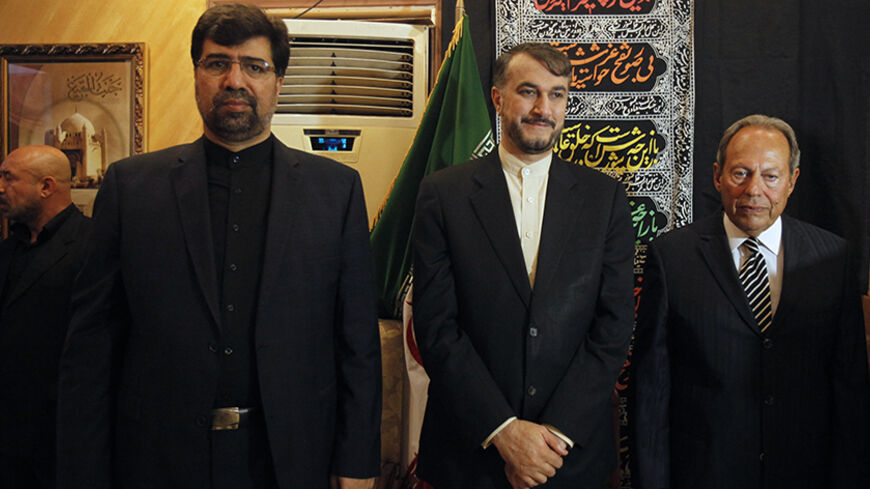 Iran’s Deputy Foreign Minister for Arab and African Affairs Hossein Amir-Abdollahian said it is “the duty of the whole world, including the United States, to help the Syrian government confront extremism and terrorism.”

In an exclusive interview at his office in Tehran, Abdollahian said the elections in Syria are an “internal issue” and a reflection of Syrian “sovereignty.”

Abdollahian, who spoke to Al-Monitor after recent visits to Turkey, Yemen and Qatar, said Iran tried its “best to push for maximum reforms possible” in Syria over the past few years.

On Turkey, Abdollahian said, “Our countries share the same view over having a political solution in Syria.”

He said Iraqi Prime Minister Nouri al-Maliki has made “courageous decisions” over the years, adding that, regarding the elections, “the coalition that wins the largest number of seats in the parliament should rule, and whoever the Iraqis agree on will enjoy the full support of the Islamic Republic of Iran.”

Abdollahian previously served as Iran’s ambassador to Bahrain. He said that the “Saudi decision to intervene militarily in Bahrain … complicated the situation there,” and that Iran has “presented an initiative for a solution, its details are kept secret, and we believe that internal dialogue can help reach a solution.”

Al-Monitor:  How does Iran see the Syrian election? Many believe it was provocative and will hinder future efforts for a political solution.

Abdollahian:  We believe that the election in Syria is an internal decision and based on the country’s constitution. Now, because of Iran’s strong ties with Syria, many tried to contact us and ask about the election and whether it’s conflicting with Geneva I. As we said, this is an internal issue and is part of the Syrian sovereignty. Iran will back any decision by the Syrian people. We don’t believe that this election should have been skipped. We always believe a political solution is possible, and according to Geneva I, both the Syrian government and the opposition have to meet, and as you know, Mr. Assad’s term will end within days, so an election was inevitable.

Al-Monitor:  The political path seems to be quiet these days. Is there anything expected soon with respect to the dialogue between the regime and the opposition?

Abdollahian:  The Islamic Republic of Iran presented a four-point plan for a solution in Syria. Even with Mr. [Lakhdar] Brahimi’s [resignation], we believe that this conflict won’t stay for long and will stop. But for it to stop, there should be a halt in sending troops and arms to Syria and all kinds of aid. I personally believe that talks will continue until we arrive at a solution.

Al-Monitor:  On May 28, US President Barack Obama told cadets at the United States Military Academy at West Point that the danger from terrorists in Syria is now a direct threat to the United States. It’s the same rhetoric Iran is using. Is it possible that both countries might cooperate in Syria?

Abdollahian:  Confronting terrorism in Syria is different; we’ll always help the people of Syria. During these years we tried our best to push for maximum reforms possible. Syria is very high on our agenda due to many reasons, one [being] its role. Another point is that we won’t forget President Assad’s role in defending the resistance bloc all these years, therefore we’ll help him confront terrorism.

Here it’s important to mention that we have several Iranian counterterrorism advisers in Syria who are giving advice to Syrian officials. We believe that is our duty, and it’s also the duty of the whole world, including the United States, to help the Syrian government confront extremism and terrorism.

Al-Monitor:  In Iraq, many factions accuse Iran of supporting Prime Minister Maliki for a third term. What’s the real Iranian stance on this?

Abdollahian:  We believe that during his premiership, which has been full of hard times, Mr. Maliki held responsibility and took courageous decisions. Iraqis, Shiites, Sunnis, Kurds and Christians must cooperate together to rule Iraq, and according to the constitution, the coalition that wins the largest number of seats in the parliament should rule, and whoever the Iraqis agree on will enjoy the full support of the Islamic Republic of Iran.

Al-Monitor:  What about Egypt? How does Iran see the latest election? Is there any chance that Tehran and Cairo can normalize ties after almost four decades of tension?

Abdollahian:  First of all, we believe that the situation in Egypt is still critical. Organizing elections was a step in the path of democracy, though issuing death sentences against hundreds of Egyptians is a matter of concern to us and is unacceptable. We believe that both our countries are important in the region. If Egyptian officials decide to approach Iran positively, then Iran will have the same approach. We look forward to [seeing] Egypt once again on the path of democracy, and moreover, we hope that the objectives and goals of the revolution will be met.

Al-Monitor:  On May 23, you met Hamas’ political bureau head Khaled Meshaal in Doha. When will Meshaal visit Tehran? It was said after the Nowruz, but it didn’t happen. Some say the only hurdle is an appointment with the Supreme Leader [Ayatollah] Ali Khamenei. Can you explain this?

Abdollahian:  My last meeting with my brother Khaled Meshaal was very positive. Our ties with Hamas never halted. It’s true that we had some differences over Syria, but in the last meeting we heard from Mr. Meshaal that they are going to support the resistance bloc. Hamas won’t forget President Bashar al-Assad’s efforts, and we are going to help our brothers. … As for Meshaal’s visits, the decision is made, but for the moment there’s no specific time [or] conditions. We want the best ever relations, but due to some technical issues, the timing isn’t set yet.

Al-Monitor:  What does Iran think of the new agreement in Palestine between Hamas and Fatah?

Abdollahian:  From the beginning we called for unity among the Palestinians, therefore we are happy and we [believe] that the outcome will be in favor of the Palestinian people, whereas all their hopes can be fulfilled. We also think such an effort should have a positive impact on the resistance front in the confrontation with the Zionist entity.

Al-Monitor:  You were once a diplomat in Bahrain. Today, one of the main issues on the table is the crisis in the tiny Gulf kingdom. Is there any way for a solution there?

Abdollahian:  We believe, with respect to the Saudi decision to intervene militarily in Bahrain, that it complicated the situation there. We presented an initiative for a solution, its details are kept secret, and we believe that internal dialogue can help reach a solution. We believe, too, that some extremists within the regime are hindering [King Hamad bin Isa Al Khalifa's] and his heir's [Crown Prince Salman bin Hamad Al Khalifa] efforts to achieve some constructive steps. The circumstances surrounding the king and the crown prince are very difficult, but Iran has always suggested that it can help arrive at a solution.