As sanctions continue to take their toll on Iran's economy, more Iran Kurds are risking their lives as border couriers to make a living. 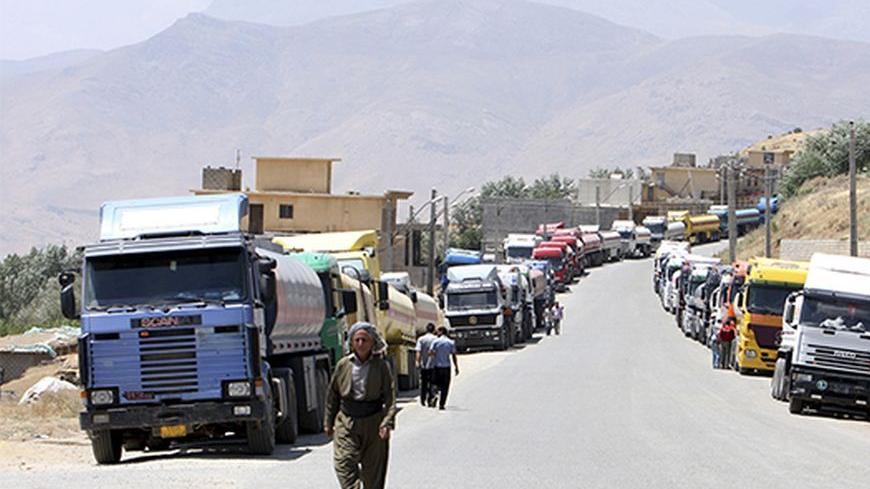 Fuel trucks are seen at Haj Umran border crossing with Iran, in northeastern Iraq, July 20, 2010. Despite a pledge by Iraqi Kurdistan to crack down on the flow of fuel being smuggled to Iran, the only real impediment truck drivers say they face are long lines. - REUTERS/Azad Lashkari

SULAIMANIYAH, Iraq — Mohammad Karimi was driving his car between two towns in the mountainous region of western Iran on an evening in early October. The vehicle was laden with satellite dishes, illegal under Iranian law, while his wife and two young children awaited his return. As he drove in that fateful night, a single bullet pierced his windscreen and struck him in the head. He died instantly.

Mohammad was the latest kulbar — border couriers who carry untaxed goods coming from Iraq or Turkey for a small fee — to be killed by Iranian border police. The police have killed close to 100 of these petty smugglers over the last two years, treating them like dangerous criminals.

While the official unemployment rate among the youth in Iran is 26%, the figure in the Kurdish areas in the west and northwest of the country is much higher, forcing people like Mohammad to resort to the perilous profession of smuggling goods across international borders.

"Unemployment in the province has become a serious dilemma," Salar Muradi, a parliament member from Kurdistan province, stated in the Iranian parliament several months ago.

In his recent report to the UN General Assembly, UN Special Rapporteur on Iran Ahmed Shaheed highlighted the "indiscriminate killings of kulbaran in violation of the domestic laws and international obligations of Iran."

Mohammad's mother, Hajya Malek Khedryan, speaking to Al-Monitor via telephone from Iran, said that her son was only trying to make a living for his young family. She said, "There were no warning shots; they just fired at his car and a bullet hit him in the head and killed him instantly."

But it is not only the authorities that fill these border couriers with fear. Last May, Wali Khodabakhshian, a friend of the author, loaded his pickup truck with fuel to smuggle across the border into Iraqi Kurdistan. He crashed the car in the mountainous roads, igniting the fuel, and was burned alive. Many others who do this dangerous job either die stepping on land mines left over from the Iraq-Iran war or freeze to death in the harsh winter of the Kurdistan mountains. Others are caught by the authorities, who seize their goods and hand them hefty fines that leave them with few options but to continue smuggling to pay them off. This creates a vicious cycle that eventually results in death for many of these petty smugglers.

This hard life for thousands of Kurds owes in part to lack of investment by the government in the Kurdish areas, which some argue is politically motivated.

"As economic problems intensify due to international economic sanctions by the Western countries and the incompetence of the government … other security and political issues have turned Kurdistan into a place for political disputes and this is one of the reasons why the government ignores the development of the region, and therefore people have been forgotten and resort to the dangerous job of kulbari to live," reads a report by the US-based Iran Human Rights Documentation Center, an advance copy of which was obtained by Al-Monitor. The governor of Kurdistan province also stated recently, "Investment and creating jobs are among the essential needs of Kurdistan."

Paiman Alkhani, 24, used to be a kulbar until he was injured by Iranian border police in 2008. He now lives in Ankara. When asked why he did such a dangerous job, he told Al-Monitor via telephone, "To put it simply, because of poverty and unemployment. There are no jobs in my region and people can only do this smuggling."

It is not clear how many people have died on the border smuggling goods in and out of Iran. Shaheed's report to the United Nations General Assembly states, "At least 70 border couriers were killed and 68 wounded by government forces between March 2011 and April 2012."

According to Gissou Nia, the executive director of the Iran Human Rights Documentation Center, the penalties for smuggling have significantly increased in recent years. She said, "In January 2012, a new law was passed that penalizes smuggling, the transport of smuggled goods within borders and the possession of smuggled goods equally — and triples the fines on those convicted of these crimes." Nia added, "Perhaps most concerning is that the law allows for the confiscation of the goods to the benefit of the state, which provides little incentive for border police not to take harsh action against those engaging in these activities. At its most extreme, the current system of enforcement can result in violations of the Iranian state's international obligations, and in particular, an individual's right to life as provided by Article 6 of the [International Covenant on Civil and Political Rights], which Iran is a signatory to."

As for the future of Mohammad's young family, his mother said, "Their life is destroyed. Only God may help them. We are all distraught at this loss."