As the economic crisis deepens in Iran, more people are risking their lives to earn money by transporting goods through the mountains of the Kurdistan region on the Iraq-Iran border. 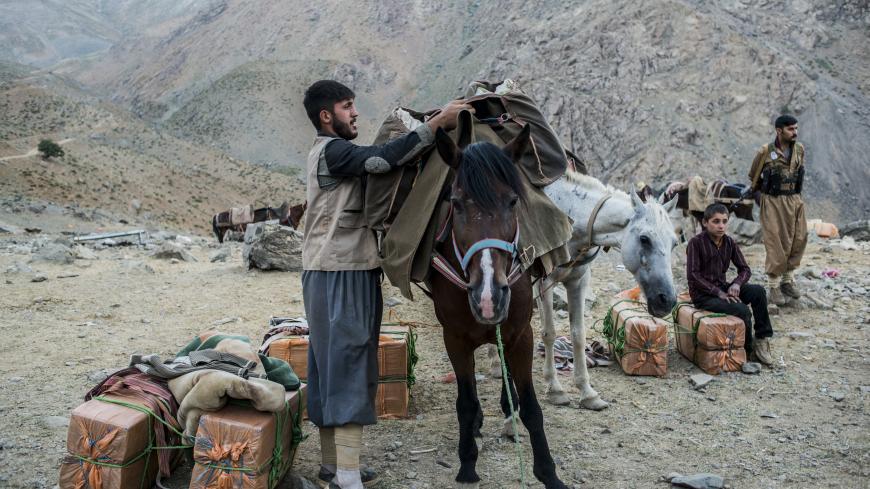 Work can be dangerous for the Kurds hired to carry goods across the Iran-Iraq border. “Facing harsh weather, topographic conditions and gunfire, we risk our lives to barely provide our family’s daily bread,” an Iranian Kurd recently told Al-Monitor via a messaging app. Many of these couriers, called kolbars, feel they have little choice.

The couriers traverse snow-covered mountainous routes while wary of Iranian border guards’ bullets and schlepping giant loads on their backs, or guiding animals, to make a few dollars a night. On Feb. 16 in Nowsud, guards opened fire on a group of kolbars, killing three and seriously wounding six. Another shooting incident, on Feb. 28, left two kolbars injured.

The number of people working as kolbars is increasing as the long-running economic crisis in Iran continues to deepen, exacerbated by mismanagement, corruption and US economic sanctions. Violence against couriers has also been on the rise.

In January, the Kurdistan Human Rights Network (KHRN) reported that in 2019, Iranian soldiers and border guards killed 57 people. Another 22 died from such tragedies as avalanches, falls from high passes, buried explosives detonating, and vehicular accidents during police chases. KHRN said 66 others had been injured.

Rabin Rahmani, a member of KHRN's managerial board, told Al-Monitor, “In previous years, only locals from the border areas were working as kolbars, either formally or informally, but with the tightening of US sanctions on Iran in 2018, more people from big cities — more than 150 kilometers [93 miles] from the Kurdistan region's borders — have had to work as kolbars.”

“The kolbars who have recently been killed or wounded by Iranian border guards are from big Kurdish cities, far from the border,” Rahmani continued. “The systematic killing of kolbars continues, although only a small volume of smuggled goods has been transported via kolbars, and the remaining has gone through southern ports in Iran.”

From 2011 to September 2017, Tehran permitted local people from border areas to work as kolbars to reduce the supply problems and other burdens of US and Western sanctions.

“The Iranian state, instead of boosting agriculture and industry, mistakenly made locals stick to being kolbaris, and now it is difficult for people to quit this dangerous [job],” Mukhtar Khandani, a Kurdish journalist and activist living in Iranian Kurdistan, told Al-Monitor. “Some big fish on both sides of the Iraq-Iran border are behind this profitable business, made so because the transported goods are untaxed, and kolbars are only receiving a few dollars.”

Boys in their teens are working as kolbars, Khandani said, and according to Iranian newspapers, a few women are also taking on the risky job, sometimes dressing as men.

By Khandani's count, “Since the start of 2020, about eight kolbars have been killed by Iranian border guards. More than 20 others were wounded, and nearly 40 were injured due to natural accidents.” The systematic killing of kolbars continues, he said, even though only 5% of smuggled goods are transported by them, with the remaining 95% passing through official border crossings.

“The Iranian parliament needs to amend the law for using arms that dates back to the era of the shah's regime and allows regular forces to shoot at civilians,” Khandani said, offering one way to limit the killing of kolbars. “According to the law, Iranian border guards should caution kolbars three times to stop before shooting, but they often shoot the kolbars without warning and with the intent to kill.”

Azad, a pseudonym for a kolbar from Iranian Kurdistan, told Al-Monitor via an encrypted messaging app that couriers often work at night and for a delivery barely earn 300,000 to 400,000 Iranian tomans ($27 to $35 dollars), which is the price of 3 kilograms (6.6 pounds) of meat in Iran. “We don’t go every night,” he told Al-Monitor, speaking on the condition of anonymity for fear of retribution from Iranian authorities. “We are doing this dangerous work to avoid starvation.”

According to Mabsur Muradi, Kurdish representative in the Iranian parliament for the city of Mariwan, unemployment in Iranian Kurdistan stands at around 50%, and inflation exceeds 45%. “We do not have any other alternatives,” Azad added.

International human rights organization have yet to publicly raise concerns about the kolbars being shot. In a 2019 report, UN special rapporteur Javaid Rehman wrote that Iranian border police in some cases have killed unarmed couriers. He cited specific instances from May, noting that the couriers had posed no imminent threat to the officers when they were killed or injured. Such incidents constitute an illegal use of force.

Now kolbars face the added danger of the novel coronavirus, which potentially threatens their health and livelihoods. In an attempt to stem the spread of the virus, the Kurdistan Regional Government (KRG) on Feb. 22 closed its border with Iran, one of the most severely affected countries thus far. As of March 5, Iran's official news agency reported that 3,517 people had been infected with the virus, 107 had died, and 739 had survived it.

Khandani said KRG security forces and Iraqi federal border guards were not for the moment looking the other way and letting kolbars cross the border. Thus kolbars in both Iran and Iraq are looking for alternative routes so they can continue working.