Despite repeated pledges of investment and other measures to address unemployment, dire economic conditions continue to force Iranian Kurds into the smuggling trade. 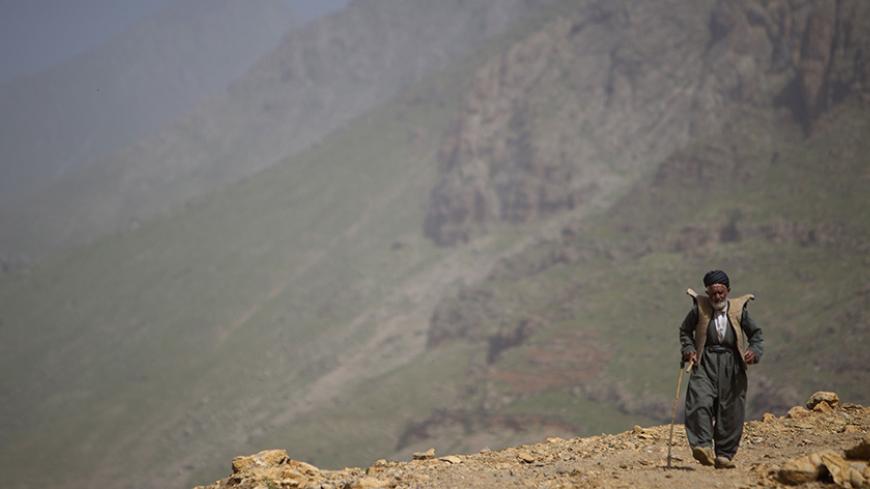 An Iranian Kurd walks along a mountain in Ouraman Takht village in Kurdistan province, Iran, May 12, 2011. - REUTERS/Morteza Nikoubazl

Iranian authorities are struggling to address smuggling in border areas, and particularly the Kurdish region, where local economies are in tatters after decades of government neglect and discriminatory policies. Thousands of Kurds carry illegal goods into the country from Iraqi Kurdistan for a fee in order to provide for their families, in operations commonly organized by wealthy smuggling rings in Tehran and other big cities. The Kurdish men are known as "kolbar" — porters crossing the remote mountains between Iraqi and Iranian Kurdistan with goods smuggled on their backs.

The Iranian government was expected to finally take action on the issue last year as Supreme Leader Ayatollah Ali Khamenei made a rare intervention. “Be determined in fighting smuggling. When I say smuggling, I don’t mean a poor kolbar from Baluchistan who goes to the other side of the border and carries a thing on his back to this side. … This is not important, it won't matter even if you don’t confront them," Khamenei told officials last year. "I am talking about big coordinated smuggling [rings]; we need to fight them, we are the state, we have the power.”

But despite the supreme leader’s warning, the numbers of kolbar killed by Iranian border guards are rising fast. In the early hours of July 1, a group of eight kolbar was operating in the border area near the Iranian town of Baneh when the kolbar came under fire from border guards. One kolbar was reportedly killed and another suffered serious head injuries. Incidents such as these have become a weekly occurrence in the Kurdish areas in western Iran. In 2016, at least 49 kolbar were either killed by direct fire from Iranian border guards or due to natural incidents such as avalanches. In comparison, the first six months of this year have seen at least 40 kolbar killed and 87 others wounded. The renewed violence between Kurdish militants and the Islamic Revolutionary Guard Corps in these border areas is another factor that is contributing to the rising number of casualties, as the kolbar face the risk of being caught in the occasional crossfire.

Border smuggling is big business in Iran. It is estimated that kolbar carry $3.6 billion worth of goods into the country each year. While significant, some experts consider this figure to constitute only some 30% of the value of the goods that enter Iranian markets without payment of duties and tariffs.

Only a small part of smuggling revenues stay in the Kurdish areas, mainly in the form of courier fees; most profits are pocketed by big merchants in Tehran and other major cities who find it cheaper to smuggle rather than legally import their goods into the country. While the smuggling damages domestic manufacturing and production, creating unbalanced competition, the Iranian government has yet to deal with this phenomenon in a constructive way that entices the thousands of kolbar to abandon their dangerous work and instead seek alternative job opportunities. Indeed, Iranian Kurdish parliamentarians consistently complain that the government is not serious about resolving smuggling. To address the issue, they have called on the authorities to develop the border crossings with Iraqi Kurdistan into free trade zones, where some of the kolbar can find sustainable employment. However, as noted by Mohsen Biglari, an Iranian member of parliament from Kurdistan province, one of the main challenges in the country’s Kurdish areas is the difficulty in attracting investment.

In the absence of effective measures to tackle joblessness, the authorities have taken the step of extending social security coverage to the kolbar — albeit only those who are considered as “official” porters. Earlier this month, Rasul Khezri, a parliamentarian from Sardasht and Piranshahr where thousands of people are engaged in the smuggling trade, announced the signing of an agreement to extend insurance coverage to between 14,000 and 18,000 kolbar in these two towns. The insurance will include coverage of disability as well as pensions for those who have worked over 15 years or are over 65 years of age. The annual premium is set at 4.83 million rials ($148) according to the agreement, of which 95% will be covered by the state. Thus, eligible kolbar will only need to pay 241,500 rials ($7.40) per year.

Nonetheless, “official” kolbar — meaning those who hold licenses to work at the official border crossings — only find such employment a few days a month. Thus, even these kolbar often have to resort to smuggling of goods across the mountains to have sustainable livelihoods.

“Seeing the people of this region carrying heavy and bulky loads to make a living is painful and we need to find a solution to help them,” First Vice President Eshaq Jahangiri said while visiting Kurdistan province July 8. “To resolve this issue, the government supports new ideas and alternative plans and even financial assistance to meet the needs of this sector of society and so that 'kolbari' [illegal porter services] is removed from the social life of Kurdistan as a profession.”

President Hassan Rouhani has repeatedly pledged to the people of Iranian Kurdistan, where he received 75% of the vote in the May 19 elections, that more investment will be provided and that the issue of unemployment will be tackled. But his pledges have yet to turn into real change — especially for the kolbar.