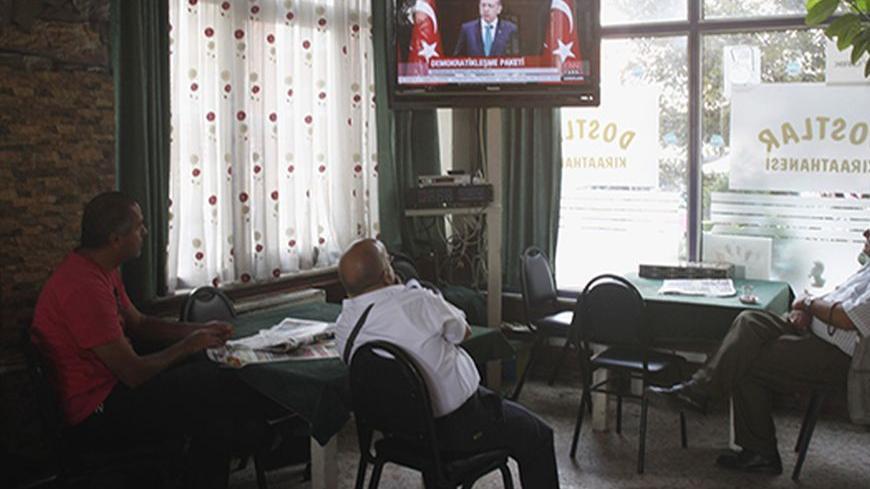 When the Arab Spring broke out in December 2010, Turkey was considered a neutral soft power that could help stabilize the turbulent Middle East by being a positive political and economic model. It was, after all, a predominantly Muslim country with a democratic system of government, despite past interruptions to the democratic process.

It was also a country with a vibrant economy, growing rapidly and raising standards of living. This aspect was particularly admired by many in the Middle East, where people’s interest in the Turkish lifestyle also skyrocketed, as evidenced by the mass appeal of Turkish soap operas depicting alternatives ways of living for modern Muslims.

Whatever grudges some countries or groups may have against Turkey over its Ottoman legacy, it was generally conceded by the region’s intelligentsia that the “Turkish model” provided a viable alternative for Arab societies. Much was written about this idea, which was also said to prove that Islam and democracy are compatible.

The most important aspect of the Turkish model for the region, however, was the existence of the Islamist Justice and Development Party (AKP), headed by Prime Minister Recep Tayyip Erdogan. The party won the electoral vote in 2002 and went on to increase its popularity in subsequent general elections. This proved to devout Muslims that a secular democracy need not be a hindrance for political Islam.

The days when these optimistic notions about Turkey inspired hope in the East and the West, however, seem to be over. Today, Turkey’s image as a country that has open channels of dialogue with everyone and which is rapidly deepening its democracy and increasing respect for human rights, is severely tarnished.

The brutal crackdown on the Gezi Park protests and subsequent anti-government demonstrations that started in late May showed the world that Turkey, far from moving toward the “advanced democracy” Erdogan has been touting, still has a way to go in this regard.

Meanwhile, miscalculations concerning the Middle East, where Turkey is seen today as no more than a selective supporter of fundamentalist Sunnis led by the Muslim Brotherhood, has left Ankara more or less friendless as far as regional powers, including Sunni ones, are concerned.

For all his talk about the importance of democracy, Erdogan is no longer seen as a shining example of a Muslim democrat, but rather as an ideologically motivated Islamist lobbyist on the international arena, with increasing authoritarian tendencies at home. The result is a slew of Western commentaries wondering whether there is a positive “Turkish model” left worth emulating by Islamic countries as they search for their democratic futures.

For example, in a piece with the revealing headline “How Turkey blew its chance to lead this troubled region,” the Independent’s Patrick Cockburn asked the following loaded question in his column on Sept. 29: “Whatever happened to the idea that Turkey was the coming power in the Middle East, with its surging economy and stable democracy under a mildly Islamic government which might be the model for Arab states as they ended decades of police-state rule in 2011?”

Cockburn went on, “Turkey could have played a constructive role that would have much enhanced its influence and saved a lot of lives if it had taken a more neutral stance enabling it to mediate between different sides” in disputes from Iraq to Syria. “Whatever happens, Turkey's moment in the Middle East seems to be passing with strange speed and may be one of the great lost opportunities of regional history,” he said.

Similarly, David Gardner of the Financial Times pointed out in his Sept. 30 column that when Erdogan “went on his triumphal tour of Egypt, Tunisia and Libya two years ago, he was greeted by youthful crowds that had overthrown dictators in their countries.”

This was based on the assumption, he said, that “Turkey’s ability to expand democracy and accommodate political Islam would help guide the ‘Arab Spring’ countries through the trauma of transition.”

Today, however, Gardner added — echoing Cockburn’s reasoning — that “the fall in both Turkish fortunes and Mr. Erdogan’s popularity have been near uniform across the region.”

Harsh commentary on Erdogan has also come in recent days from Roger Cohen, writing in the The New York Times on Sept. 27: “Erdogan’s fulminations over the suppression of the Muslim Brotherhood in Egypt and the treatment of the Sunni opposition in Syria have the air of the unbalanced outbursts of a lonely man whose moderate Islamism has morphed into an immoderate fury.”

Likewise, Doug Saunders of the Canadian daily Globe and Mail pointed in his recent commentary to Ankara’s failed Syria policy, and argued that this was a major motivating factor behind this summer’s mass protests in Istanbul. “Mr. Erdogan’s heavy-handed, demagogic response to those protests further alienated him from his neighbors and voters,” Saunders said.

For Erdogan and his close advisers, there are wily quarters, most likely members of the “international interest-rate lobby,” to use their characterization, who are behind this bad press. This appears to imply that they are not all that concerned about the negative fallout from Erdogan’s, and consequently Turkey’s, tarnished image.

There are, however, those in Erdogan’s cabinet who appear concerned over this. The AKP’s “economic supremo,” Deputy Prime Minister Ali Babacan, who was foreign minister before Ahmet Davutoglu was appointed to the job in May 2009, is one of them.

“Serious damage was done to how Turkey is perceived abroad. I don’t think this damage is of the sort that can be fixed in a few months. It is going to take time for Turkey to regain the positive perception it had before,” Babacan said, going on to indicate that this bad image had also contributed negatively to economic performance.

As expected, Babacan blamed radicals among Gezi Park demonstrators for this negative perception, even though it was the police brutality against demonstrators that the world was primarily focused on, and which ultimately tarnished Turkey’s image. But his acknowledging that Turkey’s reputation would require some effort to improve was still important.

Erdogan announced his government’s long awaited “democratization package” on Sept. 30, against this somewhat bleak backdrop. The package he announced on live TV to a riveted nation aims to enhance the state of democracy and human rights in Turkey, with particular emphasis on the rights of Kurds and Alevis.

There is much ongoing debate in Turkey, which undoubtedly will also be covered by Al-Monitor, concerning the merits or demerits of the package. Depending on one’s vantage point, it is seen either as a glass that is half full or one that is half empty.

The package was nevertheless welcomed by the European Union, which Turkey still hopes to join one day, as well as the United States, which prepares an annual report on the state of Turkish democracy and human rights. Meanwhile, Erdogan has said that more similar packages would be announced by his government in the near future.

The positive press coverage this package has attracted internationally may help do away with some of the bad press Erdogan has been receiving of late, and even save his reputation among those clamoring for genuine democracy in the Middle East. But this is not the first democratization package announced by the government, and Turkey is still considered a prison for journalists, and where police brutality is rife and condoned by the government.

Ending the bad press and starting to improve Erdogan’s international reputation with regard to democracy and human rights will therefore depend very much on how this package is implemented. Whether it is implemented in the right spirit and without discrimination, however, remains to be seen.