Israel Remembers Vows of Soldier For Comrades in Golan

Vows by Dan Almagor during the Tel Saki battle were transformed 40 years later into a memorial site for the Israeli soldiers who died there. 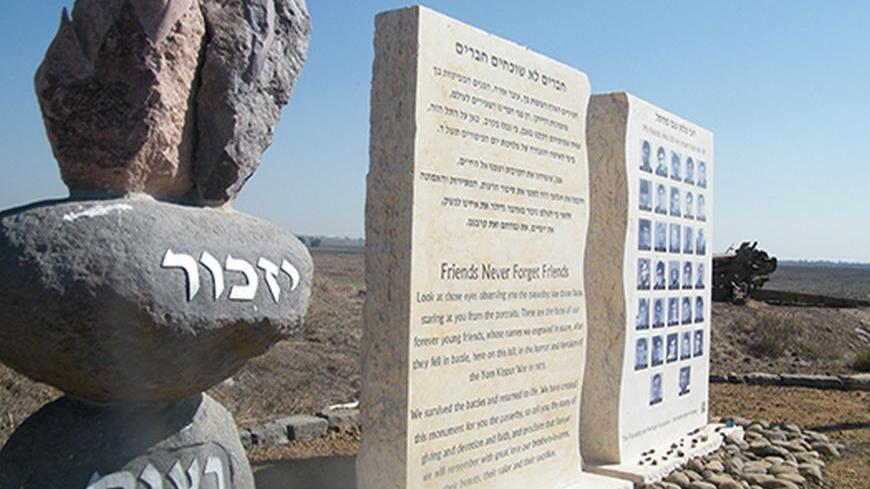 The Tel Saki memorial on the Golan Heights, seen here on Sept. 9, 2012, marks the site of one of the fiercest battles of the 1973 Yom Kippur War.

Oct. 8, 1973. On Tel Saki, a lofty hill in the southern Golan Heights, a handful of Israeli soldiers are busy counting the bodies of their fallen comrades. Of the 32 fatalities from the armor and Nahal units, Dan Almagor recognized more than 20 of them.

Almagor was a 20-year-old paratrooper at the time, born in Romania and raised in the Tel Aviv suburban city of Giv'atayim. He was given the task of identifying his dead friends and inserting little notes with their names on them into their shirt pockets. Since Almagor had specialized in explosives, he was also asked to make sure that the bodies were not booby-trapped. Syrian forces were camped a few hundred meters away, as the Israel Defense Forces (IDF) continued to push them off the Golan. Smoke clouds still rose from the hill.

Almagor first approached the body of Lt. Beni Hanani of Jerusalem. “Next to his head was the white skullcap, with blue stripes. It was clean, even though everything all around was full of black dust, powder,” Almagor told Al-Monitor from his home in Florida.

At that moment, Almagor resolved to establish a monument to his friend in his heart. The days and years passed without his finding a suitable way to do so. “Over the years, I was afraid that I would forget the promise,” he said. “At first I thought that I would wear a skullcap. I bought one like Beni had, but I didn’t feel comfortable with it. Then I decided that when I set up my own household, I would keep kosher in the house. And that’s what I did. In this way, I remember Beni and the friends who fell.”

That was one of three vows that Almagor would make in the holding-defense battle. After leaving Hanani’s body, Almagor climbed to the top of the hill and discovered another corpse, that of Roni Hartenstein from the Haifa suburb of Kiryat Motzkin. At that point, he vowed that if he ever had a son, he would name him after Roni. Today, Roni Almagor is over 33 and knows the story of the battle.

Tel Saki was the site of one of the fiercest battles of the Yom Kippur War. Dozens of Israeli soldiers fended off Syrian armored and infantry units for a full 24 hours. When the command post finally fell to the Syrians, 28 Israeli fighters hid in its narrow concrete room unbeknownst to the Syrians. As the soldiers sat in the cubicle-like post anticipating rescue or death, two convoys were sent to free them, but were halted by enemy fire that killed most of the soldiers. The third attempt succeeded, the one in which Dan Almagor participated.

“I looked at the slain soldiers, and stretchers with the wounded, and understood that the unbelievable had happened, and the state of Israel had not fallen,” Almagor recalled. “I stood there, taking in the significance of the situation. While my heart cried in pain over the losses, I promised my friends who were killed that I would do everything in my power so that their act of self-sacrifice would be retold.”

Thus was born the third vow — to bring knowledge of the heroism of his friends to the world. But how could he tell of it when he himself repressed the terrors of the war? Several years later, he married an Israeli, moved to the United States and developed a successful career there. Today he is chairman of an American investment bank and a member of the board of several financial bodies.

“In order to survive, I locked the story in a safe. I only ‘opened’ that safe twice a year: on Yom Kippur and on the Israeli national Remembrance Day. And then I watched the movie “Saving Private Ryan” and I fell apart. Until that day, for 27 years, I had never told a thing to my family. I gathered my strength and decided to search for my friend Menahem Ansbaher, Tel Saki’s commander. I wrote to him, ‘I close my eyes, but the world doesn’t disappear.’ We met in Israel for the first time since the war, and started to fulfill the vow.”

Until that time, few Israelis were familiar with Tel Saki. In recent years, however, Almagor founded the Friendship and Heritage Foundation, and hundreds of thousands of people have visited the site. Almagor operated with the acumen of a brand expert. He used his own money to produce a documentary, “The Battle Over the Soul,” directed by Yuval Delshad.

Next, Almagor turned to Yankale Rotblit, who would write the song “Forever Young,” based on events at Tel Saki, for Yehuda Poliker. A music video was produced on the heels of the song. Almagor asked for, and received, a documentary program on the army radio station, founded an Internet site and ordered memorial pins with pictures of the soldiers who had died in battle.

The single most significant commemoration undertaken by Almagor, however, is the monument on Tel Saki. Next to the isolated cement cubicle that remained on the site, Almagor and his friends placed a sculpture and a memorial panel. The monument stands at the top of the hill, between an IDF tank left over from the war and a rusty cannon. Not far away sits a charred Russian BTR armored vehicle. It was in this vehicle that soldiers died while trying to rescue the men in the besieged post.

Almagor celebrates his 60th birthday this year. Although he lives in the United States, his heart is still in Tel Saki. The kid from the suburbs of Tel Aviv brought much of what happened to him during those hours on that hill to the immaculate corridors of the large investment banks of North America.

“From the beginning of my civilian days, I implemented things I learned in the army,” he says. “To establish good teams, to rely on one another, to make sure that the equipment is complete, to make sure there is information from the field and data about the competing company. To minimize surprises. The catastrophe in Tel Saki happened despite all the preparations. There, almost everything went wrong. But the best team was there, equipped with values and the deep-rooted thought that everything is possible. When I reached high-level administrative positions in an investment bank and people used to tell me about something that is impossible, I smiled. I didn’t tell them about Tel Saki, but I thought to myself, ‘Impossible?’ You don’t know what you are talking about. I met the inconceivable in person. If you believe, we will win.”

Now Almagor wants to rest a bit, to look back in sorrow and satisfaction on the three vows that he fulfilled, and think peacefully about the next project. “In Tel Saki, I learned that no matter how much I think that I’m ready, there will always be surprises,” he concluded. “Without Tel Saki I never would have achieved my current level of professional success. Tel Saki taught me that borders are in your head. After all, what are the chances that a hundred fighters will succeed in stopping 11,000 enemy soldiers? I also learned there the importance of the individual. The generals didn’t determine the battle results, but the fighters on the ground did. In my work in the bank, I was always careful to listen to the simple soldier, not just the CEO. I think, and I feel, that our friends up there are smiling.”

Jacky Hugi is the Arab affairs analyst for Israeli army radio Galie-Zahal, a columnist for the business newspaper Globes and the former Arab Affairs correspondent for Maariv. On Twitter: @JackyHugi