Increased international attention on Syria has reignited debate among West Bank Palestinians over whom to support. 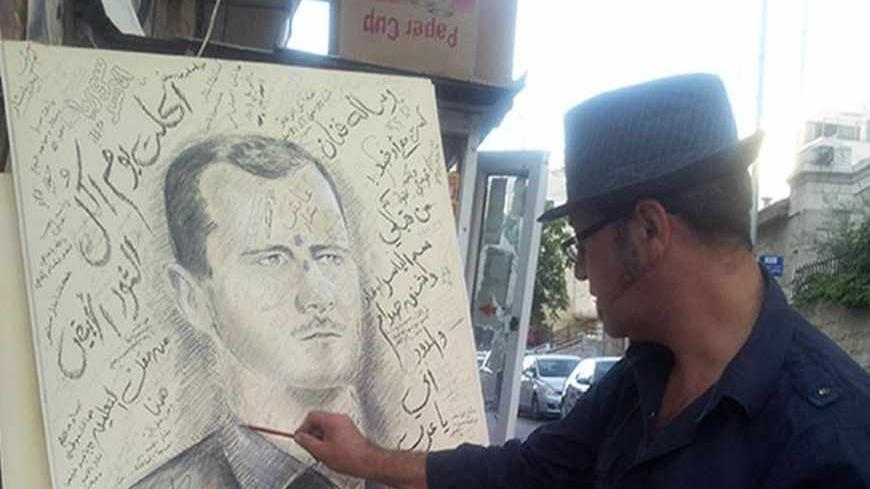 RAMALLAH, West Bank — On Rakib Street in downtown Ramallah, a portrait of Syrian President Bashar al-Assad occupies a corner of the sidewalk. For nearly a week, it has been a point of controversy among passersby. Some approach the drawing, take a closer look, and then direct words of either admiration or scathing criticism at the artist, Abdul Hadi Yaish. Meanwhile, others take it upon themselves to write comments on the blank space of the painting.

"The portrait transforms into a place for heated debate among passersby. Two days ago, an argument between supporters and opponents of the Assad regime nearly turned into a fistfight," said Hadi, who has turned Rakib Street into a place to display his artwork in the open air for nearly three years.

The comments of passersby reflect the huge division among the Palestinian public regarding the Syrian crisis, between opponents and supporters of the regime. There are comments such as, "Long live Syria! … Leave, Oh Bashar!" "Syria and al-Assad … the Baath Party is stronger than death!" and others that reflect Palestinian public opinion.

Even the marches and vigils organized by Palestinian supporters of the Syrian regime often include heated verbal altercations between regime supporters and opponents. The latter view Assad as a dictator who is killing his own people, and constantly mention that the Assad regime was responsible for the massacre of Palestinian refugees in Lebanon at the Tel al-Zaatar camp in 1976. The most recent such march organized by regime supporters was held Sept. 1.

Writer and political analyst Khalil Shaheen believes that the Syrian crisis has deepened the polarization within Palestinian society between supporters and opponents of the Syrian regime.

"At the beginning of the Syrian crisis nearly two years ago, the Palestinian public was sympathetic to the events in Syria because the struggle against the regime was popular. Yet, as the conflict transformed into an armed struggle — involving murder, genocide, and the intervention of new parties, such as the Salafist Jihadists — Palestinians began to fear that a dictatorial regime would be placed with a bloody regime, merely a new form of tyranny,” Shaheen told Al-Monitor.

All of the marches, vigils and statements released in support of the Syrian regime in the Palestinian territories are organized by the Arab Socialist Baath Party in the West Bank.

When Al-Monitor spoke with Ihsan Salem, the secretary general of the Arab Socialist Baath Party in Palestine, he seemed engrossed in preparing for a huge festival in support of the Syrian regime that is scheduled for Sept. 23. Since the beginning of the Syrian crisis, the Palestinian Baath Party has organized dozens of events and vigils to support the Syrian regime, Salem explained. During these events, participants wave Syrian flags and carry posters of President Assad.

"Palestinian public opinion is against the conspiracy happening in Syria, orchestrated by some tyrannical Arab forces and Western colonialists. Now, things have become clearer, and the threads of this conspiracy to plunder Syria's resources and control it have been revealed. This is because the Assad regime poses a threat to Israel," Salem said.

The Arab Socialist Baath Party was established in Palestine in 1966, affiliated with the Vanguard for the Popular Liberation War — also known as the al-Saiqa Forces. It is considered to be a part of the Palestinian Liberation Organization (PLO), but the party has refused to attend any events or meetings held by the PLO for 20 years, in protest of the PLO's signing the Oslo Accords with Israel.

The bloody events in Syria left many Palestinians uncertain, yet the threat of an American strike on Syria realigned the public against the US.

Despite this shift in Palestinian public opinion against any foreign military strike on Syria, pro-Syrian regime marches usually face sharp criticism from those Palestinians who view former President Hafez al-Assad as a killer of Palestinians, and his son as someone who kills his own people.

Maysa Khatib, a Palestinian theater actress, expressed surprise at those Palestinians who support the Syrian regime and are not ashamed to carry pictures of President Bashar al-Assad.

"Every human has the right to have an opinion and express it, but I'm surprised — shocked even — that there are Palestinians who support the Syrian regime. This regime besieged the Tel al-Zaatar camp in 1976, and the Shatila camp in 1985. The Syrian regime, under the leadership of Assad's father, killed 76 members of my family, so how can I today support his son, who is no less bloody?" Khatib, who was born in the Tel al-Zaatar refugee camp in Lebanon and returned to Ramallah after the signing of the Oslo accords in 1993, told Al-Monitor.

"I am talking about historical facts, not an opinion. History recorded how Hafez al-Assad exterminated the opposition in Hama in 1982. How is it possible for some Palestinians to support the Syrian regime? I don't understand this," she added.

The Palestinian Baath Party usually evokes the names of prominent Palestinians during any protest or march in support of the Syrian regime, to gain more popular support among Palestinians. These figures include Bishop Atallah Hanna, who has been known for supporting the Syrian regime since the outbreak of the crisis, as well as the secretary-general of the Union of Palestinian Writers, poet Murad al-Sudani, and the leftist intellectual Adel Samara, in addition to other well-known Palestinians.

“A significant number of young Palestinians are affiliated with the Baath Party, and this is not just for show, as is the case with their affiliations to Palestinian factions. They are more deeply involved, and support the nationalist ideas advocated by the Baath Party,” Salem noted.

The division characterizing Palestinian public opinion will remain an issue. It seems that this debate — between regime supporters who believe that Assad is resisting Israel, and opponents who see the regime as one that kills Palestinians and its own citizens — will not be resolved anytime soon.