Is Defection of Syrian General Part of Russian Plan?

There are reports that a high-ranking Syrian Alawite officer, Gen. Ali Habib, has left the country, leaving some thinking this could be part of a Russian plan to reach a solution to the conflict. 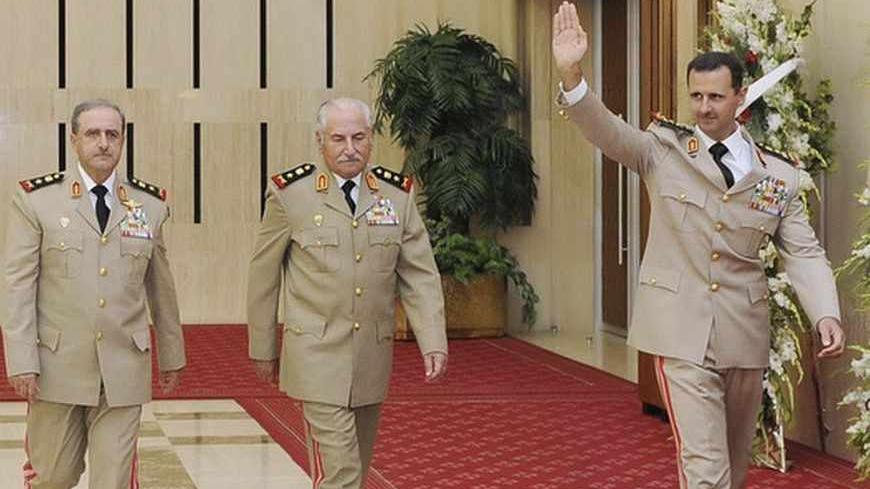 Syria's President Bashar al-Assad waves as he arrives with then-Syrian Defense Minister Ali Habib (C) and Chief of Staff Dawoud Rajha in Damascus, Aug. 1, 2010. There are reports that Habib has left the country. - REUTERS/Sana

Did the Ghouta chemical attacks serve as the opportunity that had been sought for more than two years to conclude an American-Russian agreement, ensuring a peaceful transfer of power in Syria? What does this have to do with the reports disseminated in the past two weeks about one of the most prominent Alawite army officers traveling outside Syria?

A Lebanese official closely observing American-Saudi communications concerning Syria explained to Al-Monitor that Washington had been thinking of an agreement process, to be implemented over several stages, ever since the Syrian crisis escalated and was transformed into a bloody war of attrition with no solution.

For the past two years, at least, Washington has been proposing a heading for this: an agreement that starts with President Bashar al-Assad and ends without him. This agreement has often been referred to as a “Yemen solution in Syria” in the sense of launching a peaceful and slow course that prevents Syria from having to politically reposition itself on the regional level and achieves a hierarchy in the agreement, which starts with the current ruling powers and peacefully replaces them. This is the kind of solution that is divided into three stages. First, the regime and its ruling figures will not be replaced at this time. Instead, only new opposing elements will be added, and they will play a part in governance. Second, the regime figures will be changed in the medium-term. And third, there is hope to achieve a total regime change in the long term.

On the other hand, Moscow was not completely distant from this line of thought, even if partially. Russian delegations used to move between Damascus and Beirut during official missions. Al-Monitor met with them during the majority of their visits, during which they wondered about the necessary conditions to secure a solution in Syria similar to that of Yemen. They would then answer themselves: There are three required conditions — first, ensuring the position of the army in the agreement; second, ensuring the participation of minorities in the new regime so as the agreement would not be founded on a Sunni extremist massacre against Alawites, Christians, Druze and even moderate Sunnis; and third, the availability of a proper opportunity to launch this agreement.

Reading between the lines of the Russian rhetoric, it is clear that Moscow was in principle in favor of meeting Washington over a solution that starts with Assad and ends without him, provided that a number of conditions were met. First, this solution would ensure that the army remains in the seat of power so as to avoid a repeat of the Iraqi and Libyan experiences. Second, Alawites should remain the backbone to share governance with the army. Third, this change should come within the context of a chance that allows its achievement and not as part of a violent operation or a foreign intervention.

This would ensure the launching of a solution mechanism in Syria without changing the essence of the regime and without changing its regional and international positioning. Moscow also considers this to be a vital interest and presents it to the United States as being a necessity to convince the allies of Damascus, Tehran, Baghdad and Hezbollah, with such an agreement.

The same Lebanese official believes that the Ghouta attacks have served as the long-awaited opportunity. The attacks largely constitute an event similar to the assassination attempt on former Yemeni President Ali Abdullah Saleh. On June 3, 2011, a bomb attack targeted Saleh in a mosque in Sanaa. Saleh survived the assassination with severe burns all over his body. He was then compelled to seek treatment in Saudi Arabia, leaving him under the auspices of Saudi Arabia, which launched a gradual agreement process in Yemen.

The Ghouta chemical attacks largely resemble the explosion at the mosque in Sanaa. It is true that the attacks did not succeed in toppling Assad; they resulted nonetheless in deep political wounds. Assad was compelled to fully shift toward Moscow, putting the Syrian regime under Russian guardianship. This will help Moscow put forth a solution and launch the implementation process.

Meanwhile, the Lebanese official notes the importance of the news about one of the most prominent retired Alawite army officers leaving Syria — Gen. Ali Habib. He served as chief of staff from 2004 to 2009, and then assumed the position of defense minister until his retirement on Aug. 8, 2011 following the eruption of the Syrian crisis. If the news is confirmed, Habib will be the most prominent officer to leave the country. This is especially significant given that he is an Alawite from the town of al-Mandara, in Safita, on the Syrian coast. The Americans and Saudis know Habib very well, since he led the Syrian military units that participated alongside NATO in the war of liberation of Kuwait, after former Iraqi President Saddam Hussein invaded and occupied Kuwait in 1990.

A commander of Saudi forces in that war, Khaled bin Sultan, highly praises Habib in his memoir Desert Warrior. Until the news of him leaving Syria spread, Habib was living in the Burjiat buildings in the western suburbs of Damascus on the road leading to Beirut, which also houses Russian military experts.

Theoretically, Habib seems to embody the Russian conditions for a solution. He is a Syrian army member and held the highest position in the army until the eruption of war in Syria. This was not the case with civil oppositionists like Prime Minister Riyad Hijab or Vice President Farouk al-Sharaa. Additionally, he is an Alawite, and from the heart of the Syria’s Alawite region. This is not the case of Manaf Tlass, the Sunni dissident officer who is tainted, along with his family, with corruption rumors.

Ali Habib is the “son of the regime” and would be accepted by the partners of the “Syrian solution.” This scenario was complemented with talk that Habib’s departure, if true, was made in agreement with Moscow. Since it was done without aggressive statements against the regime or news releases about a split or coup, this issue is worth following up on to determine whether the “Yemeni solution” has already started in Syria, or if it is just another theoretical bet.